Parents: Make Sure These Health Forms Are Sorted out Before Your Kid Goes to College 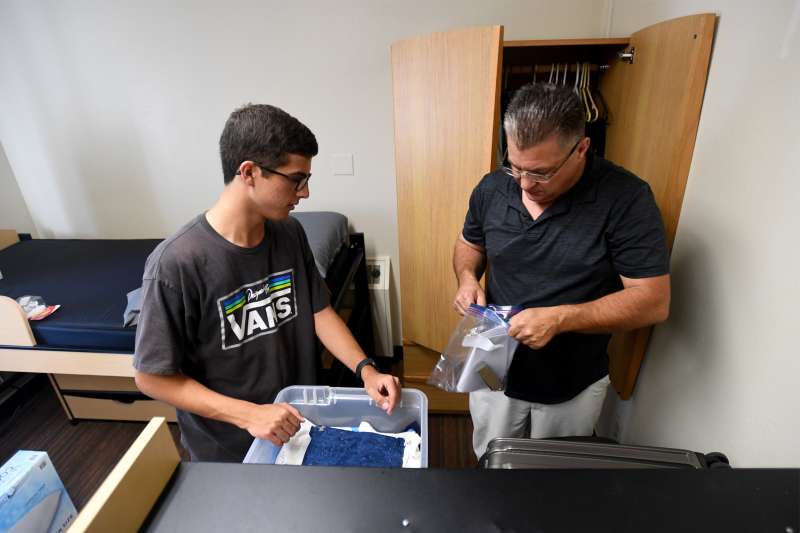 Say your child is away at college and lands in the hospital, injured and unconscious, after being in a car accident. It’s a horrible scenario to imagine, of course. But the situation could be worse: It’s possible you wouldn’t even receive information about your student’s medical status unless you’d filled out the proper forms ahead of time.

Every year, parent questions crop up about health forms for new college students, including HIPAA authorization and medical power of attorney. In 2020, with the coronavirus pandemic closing campus nationwide in the spring and COVID-19 clusters breaking out as the fall semester begins, health concerns are particularly top of mind. So it’s an especially good idea to have conversations as a family and get important medical forms organized, signed, and readily available in one place.

A HIPAA (Health Insurance Portability and Accountability Act) release allows physicians to share information and medical records with you, and a medical power of attorney form allows you to make medical decisions for your student if they can’t speak for themselves. Without one of these signed forms, you could be left in the dark if a medical emergency like the one described above occurs.

What’s more, they’re not the only medical forms parents and students should have on their radar, and colleges don’t necessarily provide these forms or help families navigate their complexities: It’s up to families to do research and decide how or if they want to complete them. There are other questions regarding health insurance, coverage, and costs that families should consider before sending a child off to college as well. Here’s what you need to know.

Make sure you have a Health Insurance Plan for you and your loved ones that best meets your wellness needs.
Select your state to get started
Get a Free Quote

Different Medical Forms, and What They Allow

When kids turn 18, parents lose access to their teen’s medical records. Parents also lose their ability to make most medical decisions on behalf of their child. At the same time, the medical world has gray areas that often allow parental decision-making in emergency situations (more on that in a minute), but having the proper forms signed in advance smooths the way.

This stand-alone free form releases some medical records to designated recipients, and patients routinely fill it out when establishing care at a particular facility. It doesn’t need to be notarized. Students can stipulate which parts of their health records remain private, such as mental and sexual health. Be aware, campus student health clinic records generally fall under the Federal Education Rights and Privacy Act (FERPA), not HIPAA, so that’s a different permission form. Bear mind that at age 18, students’ education records, including student health clinic records, belong strictly to them.

Also called medical power of attorney (POA) or healthcare proxy, this form gives permission to make medical decisions for someone who’s incapacitated or in an altered mental state that invalidates informed consent. Each state’s form is a bit different. Many require notarization and may include the HIPAA form.

Advance Directive (a.k.a. Living Will)

With this form, your student spells out end-of-life decision-making such as desired resuscitative care, not being maintained in a persistent vegetative state, and participation in organ donation. An advance directive often includes the medical POA.

These forms aren’t included in a college packet, so where can families find them and fill them out? Some or all of the forms may be available via the college student health clinic. Start there. Alternatively, the National Hospice and Palliative Care offers free state-specific advance directives that include medical POA, or you can contact an estate attorney.

For convenience, physicians recommend using online medical information programs or mobile apps such as the MyDirectives app. This app provides critical healthcare information, authorizations, and care objectives in emergency situations, says Rade Vukmir, MD, JD, Professor or Emergency Medicine at Drexel University, emergency and critical care physician, and spokesperson for American College of Emergency Physicians. Students can set it to be accessible in front of their phone lock.

Gray Areas: Do You Really Need These Signed Medical Forms?

Many parents worry that without signed forms, they won’t be notified about their student in an emergency situation. This can indeed happen. But it’s not usually the case, Vukmir says. Doctors are allowed a certain amount of leeway in communicating critical information if it appears to be in your student’s best interest. But the information given to parents by medical professionals will be specific, and limited. “We present only the information that’s critically important to the issue at hand,” he says. “If the parents are at the hospital for a traumatic event, the discussion is about that trauma.”

If your student doesn’t have a medical power of attorney, you’re not necessarily shut out of decision-making. “In the absence of a medical POA, we would usually allow what’s broadly called a ‘substituted judgment’ argument as long as decisions are in the patient’s best interest,” Vukmir says. But the medical POA doesn’t typically address end-of-life decisions. That’s the advance directive.

The advance directive is the most useful to the medical community, Vukmir says, in part because it prompts family conversations. Ultimately, experts say, it’s parent insight into their student’s wishes that’s most helpful in end-of-life scenarios.

That doesn’t mean medical forms don’t offer convenience — they do — because some doctors interpret medical leeway more strictly and may not be comfortable vetting parents over the phone. Plus, it’s good to plan for emergencies, says family attorney Elizabeth Pagel. Keep in mind, if your student isn’t incapacitated, the medical POA generally doesn’t come into play because students typically can give verbal permission to discuss with parents (or not).

Creating these documents is important, Pagel says, because it prompts young adults to decide who they want in their corner in an emergency. For most unmarried students, the answer is their parents, but that’s not always the case. “The student also needs to make decisions about what he wants his parents to be able to access, and what he wants to keep private,” she says.

Most colleges require students to have health insurance, typically a parent’s employer plan or the student health plan. Parents likely need to prove their employer plan is adequate, in order for the student to be waived out of the student plan. If your student’s college is out of state, evaluate which plan better covers that locale, keeping in mind students need coverage at home too. Many campus plans are national, comprehensive, and can cost upwards of $3,000 per year.

Many colleges also charge a mandatory student health fee (on top of insurance) for the campus clinic and provide services for nominal rates. Find out if the clinic requires insurance — they often don’t — remembering your student still needs insurance to see a practitioner off-campus. Some colleges are now charging a coronavirus fee that may or may not be reimbursable by insurance.

Many students don’t really understand insurance terms, such as co-pay, co-insurance, and in-network and out-of-
network (arguably the most important concept). They also don’t have a good sense of how much a visit to a doctor’s office, urgent care clinic, and emergency room costs. (Admittedly, many people in general don’t fully understand all of this either, even when they’ve had health insurance for years.)

It’s a tricky place to be as a parent. You want to give your student privacy, but you’re also paying the bills. Ongoing conversations are important so that students understand, for example, that the ER costs exorbitantly more than an urgent care clinic.

Bear in mind that while a signed HIPAA release can clue parents in when their child is involved in serious emergencies, that doesn’t mean you’ll know what’s going on medically unless your student tells you, nor will you likely see records on sexual and mental health. However, the Explanation of Benefits from your insurance company may reveal information, and your student should know their treatment could show up there. Policies vary in how they treat confidentiality. It’s a privacy loophole families might not be aware of.

In the scramble to start college, health conversations may land on the back burner. But it’s never too late to talk about these issues as a family.

Working Parents Are at Their Wits’ End with Virtual Schooling. Can Private ‘Learning Pods’ and $25-per-Hour Tutors Help?