Insuring a Vacation Home Is Surprisingly Expensive. Here's How to Cut Premiums 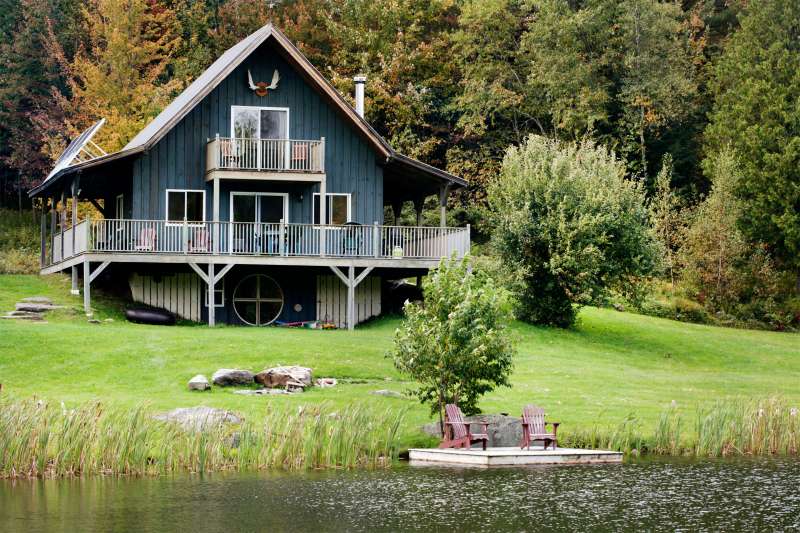 If you’re among the many who are thinking about buying a cabin in the mountains or a retreat on the beach in 2021, make sure you know how much it will cost to insure the property at the outset. You don’t want to fall in love with a house only to find out that insuring it will blow your budget.

While adding more vehicles to an auto or motorcycle insurance policy can actually sometimes make your premiums go down, that math unfortunately doesn’t work for houses. You should expect a second home to cost more than your regular homeowners insurance — potentially considerably more. “If we’re looking at two identical risks, you could probably say a second home may be 20% to 25% higher [to insure],” says Nancy Albanese, vice president of personal insurance Bryn Mawr Trust.

The perils of an empty, remote residence

Insurers view second homes to be higher-risk for several reasons, and consider those factors when they decide how much you’ll pay for coverage.

The most significant risk factor is the expectation of vacancy, that the house may be unoccupied for weeks or even months at a time. An incident like a burst pipe or a tree branch crashing through the roof can lead to a lot more damage if no one is around to notice and take steps to fix the problem, or at least send up the alert. Houses that are vacant for extended periods of time are also more tempting to burglars, and the higher risk of a break-in also is another drawback for insurers.

There’s also the matter of how quickly help can arrive in case of an emergency. “Sometimes we see homes that are in the mountains and they might be quite a distance from the nearest fire department, might not be visible to neighbors and might not have a fire hydrant within a reasonable distance,” Albanese says. Even if a fire is noticed quickly, she says, “it could take the fire department a long time to get there.”

Everything else being equal, you might be able to pay less to insure a house you visit every weekend as opposed to seasonally, if you can show your insurer that the house won’t be vacant for an extended duration. “The homeowner can help their case by outlining and recording how often they spend at the home,” says Cathy Seifert, insurance analyst at CFRA Research.

Like any home, your vacation home needs to be protected.
Whether you use it regularly or seasonally, having a homeowners insurance policy for your second home is just as important as your primary home policy. Click on your state to get a free quote.
Get a Free Quote
ADVERTISEMENT

The woes of wind, water and wildfires

The kinds of locations that make second homes attractive to you can make them undesirable for insurers. “Many second homes are located in areas that are considered hazardous for insurance companies,” Albanese says. Coastal areas can be susceptible to flooding, while remote getaways in the woods might be at higher risk of damage from forest fires.

In particular, insuring a home located in a flood-prone part of the country can be especially fraught — and pricey, warns insurance analyst Seifert. Most flood insurance is subsidized through the National Flood Insurance Program.

“Given all the climate-change-driven changes in weather patterns and flood patterns, it’s important to get an updated flood zone map, especially if you’re going to be buying a waterfront property or a coastal property that’s prone to flooding,” Seifert says.

Even if you don’t think your vacation getaway is vulnerable to floodwaters, it would behoove you to check before signing a contract to buy the home. If you plan to carry a mortgage, it’s likely that your lender will require flood insurance if the property is in a designated flood zone.

A vacation home (as opposed to a primary residence) in a flood zone incurs a $250 surcharge, and the Federal Emergency Management Agency, which administers the NFIP, has been trying to adjust rates to account for more frequent and dangerous floods. Premiums went up by 9.9% in 2020, raising the average policy premium is $1,092, but some properties can incur much higher costs.

“The premium for highly-exposed properties can be approaching $10,000 in some extreme cases,” Albanese says. “It’s very specific to the location and the characteristics of the home.”

Then there’s the peril of high winds. If your vacation home is in the so-called “Hurricane Alley,” Albanese says you should also check the fine print on your policy, because some insurers have started excluding hurricane-induced wind damage from standard policy coverage.

Even if wind coverage doesn’t require a separate policy rider, you might find your policy charges a separate deductible for wind damage: While you might expect to have a deductible of anywhere from $1,000 to $10,000 on a typical homeowners policy, deductibles for wind coverage are generally a percentage — 2% is common, Albanese says — of the dwelling coverage.

In some Western regions of the country, the primary threat is fire rather than water. “Wildfire claims and the wildfire exposure have been a pretty significant factor in homeowners insurance rates in fire-prone areas increasing substantially,” Seifert says.

The protection you get with a Homeowners Insurance policy for your second home is essential.
Whether you’re using your second home as a personal getaway or planning to rent it out, Lemonade can help make sure you have the right coverage. Click below to get a free quote.
Get a Free Quote
ADVERTISEMENT

How to Lower Your Premiums

Experts say a few tactics can help lower the cost of insuring a second home:

Bundle the coverage with other policies

As with other types of insurance policies, you often can get a better deal by bundling several types of policy with a single insurer.

You may have little alternative but to stay with a familiar company. “Many insurance companies do not want to insure a secondary home on a standalone basis, so it’s often very beneficial to bundle the second home with your other insurance policies, if possible,” Albanese says.

That said, insurance experts suggest shopping around, regardless. If you can find other takers, your current insurer might not necessarily offer the best deal on adding the second property, or on insuring both of your homes as a bundle.

You shouldn’t necessarily duplicate all the terms of the policy on your first home. Homeowners insurance is designed to cover repairs to your home’s structure, replace your personal property and cover loss-of-use and additional living expenses you might incur while displaced. “Some of those coverages don’t necessarily have to be at the level they would be if it was a primary home,” Albanese says.

For instance, if your vacation home is damaged, you aren’t going to have to live in a hotel until repairs are made. Work with your insurer to see if you can lower your coverage in exchange for a lower premium.

Consider a higher deductible, too. If you go from a $1,000 to a $2,500 deductible, Albanese says you can expect to see your premium drop by about 10%, all other things being equal.

As with a primary residence, you can often get a homeowners insurance discount if you have a burglar- or fire-alarm system, especially if it is a system linked to a central monitoring station. Experts say other equipment that might be able to lower your premiums include a water shut-off device, a backup generator, and security cameras.

Over time, these investments can pay for themselves, especially when you consider the possible savings in deductibles paid if the technology prevents or mitigate losses.

What Is Homeowners Insurance?

Hurricanes and Insurance: All Water Damage Isn’t the Same When It Comes to Coverage