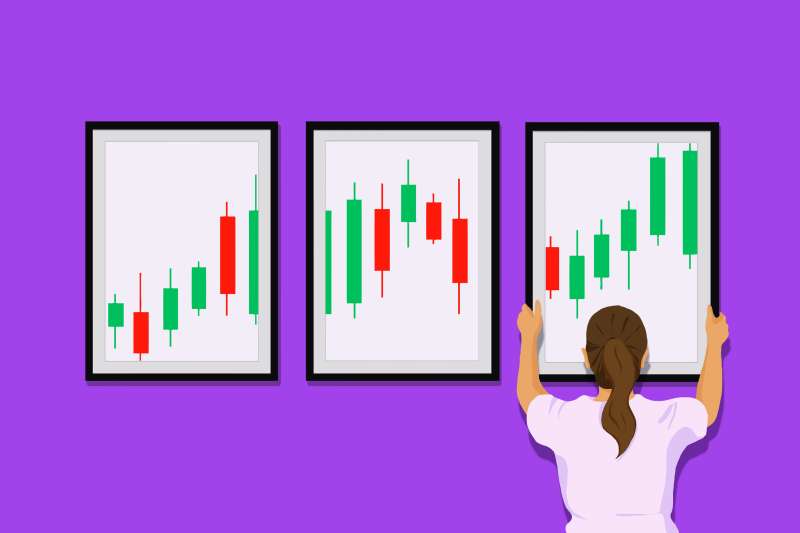 If you ever want to feel really old, tell a young investor what trading stocks used to be like.

You had to call a broker on the phone, first of all. You typically had to buy in round lots, like 100 shares. And it all came with high fees, which ate into any potential profits.

These days, on the other hand, trading stocks is a breeze: You can often do it at zero cost, from the convenience of your smartphone.

But just because you can trade all the time, doesn’t mean you should.

“There’s nothing wrong with trading actively,” says Randy Frederick, vice president of trading and derivatives for brokerage Charles Schwab & Co. “But the question of ‘how much is too much’ will differ by individual, by risk tolerance, and by net worth.”

In the past, it was very challenging for frequent retail traders to come out on top. A famous study by academics Brad Barber and Terrance Odean, “Trading Is Hazardous To Your Wealth,” quantified it: They found that those who traded the most, underperformed the market by a whopping 6.5 percentage points every year.

That was largely because of high commissions: If every trade you make is coming with some kind of sales charge, that is a high mountain to climb.

You can also point to bid-and-ask spreads, or the difference in any given moment between what would pay to buy a stock, and the amount you would receive to sell it. That’s part of the natural “friction” of trading, and over time, even small gaps add up.

But what about these days, now that commissions and spreads have drifted down?

As it happens, Barber— a professor at University of California, Davis — is currently crunching the numbers on an updated look. “Retail investors still lose from [trading], but the losses are less because spreads and commissions have gone down,” he tells Money. “Trading is a zero-sum game: If institutional investors profit from trading, then individual investors will lose.”

In other words, underperformance from trading these days is due less to fees, and more to broader issues like emotion and skill: Generally speaking, mom-and-pop investors are just not very good at it.

We are highly susceptible to a number of different emotional biases, which have been exacerbated by the extreme ease of the modern trading process.

In the old days, there were a number of barriers to taking action with your portfolio. These days, if any notion pops into your head because of a social media post, or a panicky news item on CNBC, a couple of clicks on your smartphone could lock in a trade with devastating long-term consequences.

To wit: Another recent paper co-authored by Barber, “Attention Induced Trading and Returns,” laid out the dangers of quick and easy trading. “We link periods of intense buying by retail investors at the brokerage Robinhood to future negative returns,” the authors wrote.

Whenever mom-and-pop investors herded into buying a particular stock, that led to a dip in the ensuing month. Partly to blame: Handy lists like “Top Movers” and “Most Popular”, which bring stocks to the attention of investors who might be trigger-happy and inexperienced.

Of course there is no blanket prescription for how many trades is the “right” number for investors. One person might be comfortable and successful making hundreds of trades a year, while someone else might be perfectly content to make zero.

But whichever type of investor you are, here a few principles to keep in mind:

It still pays to buy and hold

For most retail investors, who are not great at timing the market, frequent trading is not the right way to handle your hard-won savings. After all, as investing legend Warren Buffett once quipped, “our favorite holding period is forever.”

Truth be told, if we’re talking about long-term holdings, most investors really shouldn’t be dabbling in individual stocks anyways. Even big and familiar names can sometimes go to zero, as we saw in periods of market tumult like the financial crisis of 2008-09.

For that reason, focus on large baskets of securities that protect your downside. “In general, I recommend that investors use a low-cost index mutual fund or ETF for their core long-term investment,” says Barber.

Of course, buying and holding doesn’t mean you “forget” about your investments altogether, advises Frederick. You can still think about trading once or twice a year in the interest of rebalancing, since your asset allocation might have become out of whack in the normal course of market ups and downs.

Think how much, not how often

For example, a wise starting point might be to keep at least 80% of your holdings in long-term buckets that you leave alone to grow. Given stock market averages approaching 10% a year, that should compound over decades into a tidy retirement sum.

But with the remaining 20%, you could consider trading with more speculative investments like individual equities, Frederick suggests. Even if those trades don’t work out — which is certainly possible — you should have enough cushion that your financial future isn’t too severely impacted.

When to trade stocks

Before you click on that button to buy or sell, pause a beat and consider your motivations for making a trade. If it is largely because of emotion, like euphoria or panic — a stock is soaring or plummeting on any given day — then you should take a breath. Any trading decision should be based on a more sober evaluation of fundamentals.

Or perhaps your desire to trade is based on the extreme ease of doing so. Maybe your investing app put a top-10 list of hot stocks into your line of vision. Is that what brought this particular trade to mind?

If so, then you’re part of the herd — and generally speaking, that’s not the smart way to invest. “There is emerging evidence that the way information is presented to investors affects how they trade,” says Barber. “Apps with a large number of subscribers have the potential to generate collective action.”

You may even be trading out of what’s called “action bias”: The notion that doing something, anything, is better than sitting tight.

That may make you feel good in the moment, and give you a sense of control, but trading just for the sake of trading is not wise. Doing nothing is an investing strategy, too — and often a very smart one.

“Over-trading can definitely be a problem,” says Frederick. “The S&P 500 is up around 70% since its bottom in March. If you sold early on to take some profits, you missed out on the next move higher — while you’re sitting in cash earning zero.”