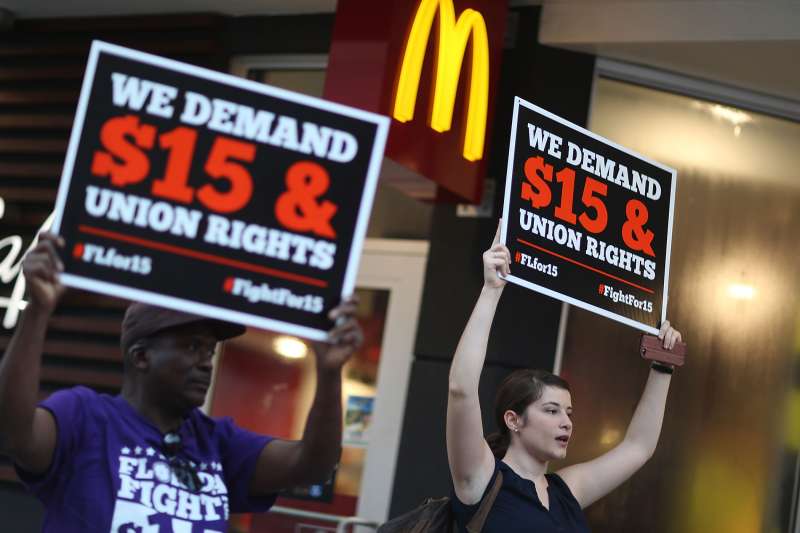 Cecelia O'Brien (R) joins other workers to protest outside a McDonald's restaurant on November 10, 2015 in Miami, Florida. The protesters are demanding action from state legislators and presidential candidates to raise the minimum wage to $15 an hour.
Joe Raedle—Getty Images

Fast food workers are protesting outside McDonald’s outlets and city halls around the country in what’s become a fairly regular ritual in the buildup to the election. Indeed, whether they’re acknowledged at tonight’s Republican debate or not, the “Fight for 15” protesters have in a short time changed the national discussion on the minimum wage, with support for minimum wage increases now cutting across some of the traditional red-blue divides.

So is this the presidential election that turns the tide for lower wage workers? Don’t bet on it. Locally, Fight for 15 has had signal success, most notably in Los Angeles, where the $15 minimum will be phased in by 2020. And New York’s governor just announced that the state would gradually phase in a $15 minimum for all state employees. Nationally, though, the $15 wage will prove to be little more than a useful slogan allowing all sides to demonstrate their ideological purity.

Raising the minimum wage is genuinely popular. Last year, 73% of Americans surveyed by the Pew Foundation said they supported an increase from the current $7.25 to $10.10 an hour. Meanwhile, the national minimum wage has become all but irrelevant, with most states setting higher minimums than the U.S. anyway. Voters in Alaska and Arkansas, for example, passed minimum wage-raising ballot initiatives in 2014, even as Democrats lost a Senate seat in Alaska and the governor’s race in Arkansas (the second by a mile). The Arkansas vote will bring that state’s minimum wage to $8 an hour in 2016 and $8.50 in 2017. With Arkansas’s low cost of living, $8 actually translates into the equivalent of $10.26 in California and $10.47 in New Jersey.

If that can happen in deep red states, you’d think that a minimum well over that $8 mark would be an easy sell in the rest of the country.

Not so fast. A rallying cry for liberals, the calls for a $15 minimum are also a boon to Republicans.

The reason is that, while the $7.25 an hour minimum wage was becoming hard to defend with a straight face—leading to unfortunate gaffes as candidates tried to say that they understood how hard it was to live on $10 an hour even while opposing an actual increase—foes of a minimum wage increase have a much easier time arguing against $15.

There’s strong evidence that small increases in the minimum wage don’t hurt employment. The Congressional Budget Office sees a small decline in jobs, a big increase in disposable income for those at the bottom, and a (very small) inflationary effect from those at the top from a $10.10 minimum (a number that in inflation-adjusted terms brings the minimum wage up to its c. 1970 high point).

But in the uncharted territory of a $15 minimum, the calculations change and the potential drop in employment is much bigger. Even some liberal commentators worry about the effects; Slate’s Jordan Weissman, for instance, believes that imposing San Francisco-level wages could mean major cuts in low-end jobs without corresponding benefits.

As a result, the talk of $15 an hour has let opponents of the minimum wage skip over the $10.10 proposal that’s actually on the table from the administration. Instead they can start painting a picture of millions of lost jobs from a $15 an hour minimum, as this Manhattan Institute paper does. And while it hasn’t yet surfaced in the campaign, it’s certainly not lost on the conservative blogosphere that Fight for 15 is an effort that is funded—and seems to be largely masterminded—by the Service Employees International Union, a favorite Republican bogeyman.

For the most part then, the $15 minimum wage battle is going to be fought on a local level, in city council halls (and plenty of back offices, too). There it will have some success, though the recent defeat in Portland, Maine, shows that supporters are close to overplaying their hand. A national $15 an hour minimum wage is not going to pass anytime soon. On the contrary, it hardens the battle lines, and will almost certainly push more Republicans to see rejecting the minimum wage as a core ideological test.

While Democrats are looking at the protests outside the country’s city halls, Republicans are most likely looking at Kentucky. Former Democratic governor Steve Beshear raised the minimum to $10.10 for state employees and contractors in June, and Democratic candidate Jack Conway made it a major election issue in the race to succeed Beshear this year. It’s an especially personal issue in the South, where more workers earn between $7.25 and $10.10 an hour and would benefit directly from any raise.

Despite all this, Conway’s Republican opponent Matt Bevin repeatedly and vociferously opposed an increase the minimum wage, and handily won the gubernatorial race last week. That election was so polarized that you might say that party (or specifically, Tea Party) identification trumped any considerations of self-interest. Look for more of the same in the national race—and perhaps in tonight’s debate as well.