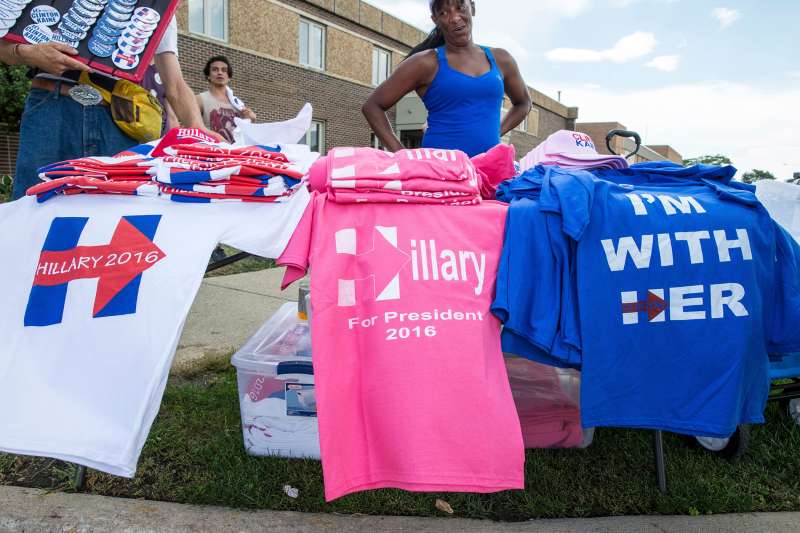 You’re voting for the first female presidential nominee of a major party, and you’re ready to shout it from the rooftops.

Maybe you’ve bought one — or, heck, all — of the 16 “Made for History” designer t-shirts Hillary Clinton rolled out on the campaign trail. Maybe you’ve snagged an “H” button to rep your girl on your backpack. Maybe you’re the scrunchie type. Whatever your fashion predilections, there’s a Hillary accouterment to match.

Now here’s a question: Is it OK to rock your “I’m With Her” merch at the office?

In a word: no. At least that’s what career experts advise.

“We’re going to be through this vote in the next month, but these fleeting moments can have a long-term impact on the workplace,” says Edward Yost, HR business partner at the Society for Human Resource Management. “It’s probably not a good idea.”

This election cycle has bred a highly contentious political climate, and with vitriol driving the conversation, Yost and other etiquette experts strongly advise against showing your political stripes at work. Chances are, your colleagues fall all along the political spectrum. If you think everyone in your “liberal” office shares your beliefs, you’re probably wrong. And if you think your t-shirt is going to sway someone’s opinion, you’re definitely wrong.

“You’re not going to change someone’s mind about who they’re going to vote for, but you could damage a work relationship,” Yost says.

But wait a sec, you protest — what about free speech?

As it turns out, you don’t actually have that at work. The First Amendment operates only against “state action,” and not “private employer action,” says New York University law professor Cynthia Estlund via email. Private companies have broad power to restrict employee speech and behavior, she explains, which means that in most work-related matters, you’re not protected by the First Amendment.

To remove any ambiguity, many large employers have dress codes prohibiting political slogans, says Yost — and violating those policies puts you at risk of being disciplined or dismissed.

But even if your company doesn’t outright ban political dress, and your workplace has a casual, Silicon Valley-inspired jeans-and-hoodie culture, career and etiquette experts say it’s still a solidly bad idea to sport a Hillary t-shirt — or, for that matter, a “Make America Great Again” baseball cap.

“It’s just going to lead to an uncomfortable office conversation that doesn’t need to happen,” says Diane Gottsman, an etiquette expert and owner of The Protocol School of Texas. “This isn’t about stifling opinions; it’s about being respectful of the people around us.”

Most of us soften our workplace behavior for the sake of common courtesy. We’re nicer on the phone than we need to be; our water cooler small talk is polite and noncontroversial. This is no different.

Forcing people to engage during work hours — whether verbally or mentally — with a taboo topic they’d rather forget doesn’t open up a dialogue. It makes you the office troll.