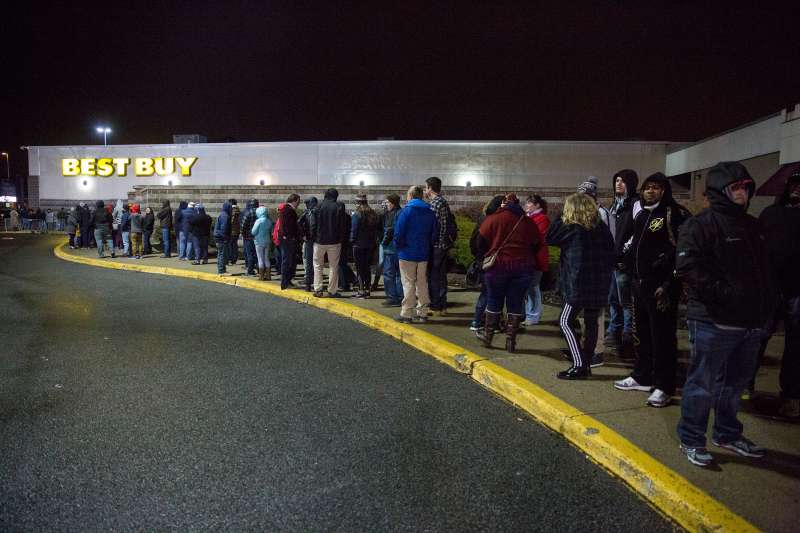 The line outside of Best Buy wraps all the way around the building at the Maine Mall just before midnight on Thanksgiving.
Brianna Soukup/Portland Press Herald—Getty Images

This Black Friday, turn off your 4 a.m. alarm and leave your folding chair at home. You don’t need to spend hours waiting in line in order to score great deals — you can pay someone to do it for you.

One of the nation’s newest side hustles is line sitting, and the concept is genius in its simplicity. People hire professionals to wait in line for them — for Broadway tickets, iPhone drops, hard-to-score restaurant reservations — and then switch spots once the sitter reaches the front.

That’s it. The pro gets easy cash; the person doing the hiring saves time — and gets quick access. Aspiring sitters, take note: Owners of line-sitting businesses tell Money that job opportunities may be picking up as the holidays approach.

“People don’t have a lot of time,” says Jennifer Goff, the founder and CEO of Skip the Line. “This is a service that really helps them to be able to do what they want to do.”

Making a Business of Sitting

Goff’s venture started in June 2017, when a Game of Thrones pop-up bar debuted in Washington, D.C. Fans turned out in force for a chance to sip “The North Remembers” cocktails and sit on the Iron Throne, and Goff took notice of the huge volume of people waiting hours to get in.

“Before I had a business plan, it was a way to make extra money,” she says. “I [would approach] people in line and [say] I’m here if they want me to wait [for them]. They can go get a drink somewhere, go get food. I’ll keep them updated with text messages and photos.”

Each line-waiting company has a unique origin story. Perhaps the most well-known business is Same Ole Line Dudes in New York City, which dispatches people to wait in lines for sample sales, Saturday Night Live seats and video game releases. Founder Robert Samuel likes to joke that it all began by accident.

In 2012, he was unemployed after being fired from his job at AT&T. An Apple fan, he posted a Craigslist ad offering to wait in line for anyone who wanted to nab the latest iPhone. His first customer ended up ordering the phone online while Samuel was waiting, so he resold his spot to someone else.

At the time, Samuel thought, “Oh, wait a minute. I made $325 in one night. Let me put my toe into this and see what this can turn into.”

How Waiting in Line Works

Darren Hromadka got into the line-sitting game when he learned his colleagues in Omaha, Nebraska, were paying college students to hold seats for them at Warren Buffett’s annual Berkshire Hathaway shareholder meeting.

Some 40,000 attendees turn out for a three-day event nicknamed the Woodstock of Capitalism, and many of them wake up before dawn in order to get good seats to see Buffett speak. It’s such a mob scene that Buffett himself told the Wall Street Journal in 2017 that hiring a person to stand in line for seats to the meeting is “probably what I would do.”

Hromadka thought there had to be a better way to bring together people who want a spot in line and people who are willing to do the work. So he classified each group, calling them “hoppers” and “spotters,” respectively, and founded the InLine4You app.

The idea is simple: Hoppers post requests on the app and say how much they’re willing to pay, and spotters claim the gigs. The average price is about $25 an hour. When the hopper shows up to take the spotter’s place in line, InLine4You processes the payment (after taking a small cut).

“It is giving the gift of time,” says Hromadka, whose app is available nationwide and has about 22,000 downloads.

And what exactly do sitters do while in line? Whatever they want. Goff, who’s not only a founder but also still waits in line herself, says she often listens to podcasts — Girlboss Radio and Serial are two favorites.

Cashing in on Crazes

Goff’s busy season got underway in October, when the Supreme Court term began. Because it operates out of D.C., Skip the Line sees interest from people who want to watch high-profile lawsuits play out.

The Supreme Court website says security starts admitting people to oral argument sessions at 9:30 a.m., but “visitors may begin lining up on the Front Plaza as early as they feel comfortable” — which sometimes means four days in advance. The average SCOTUS wait time Goff gets tapped for runs about five hours (she charges $35 per hour), with occasional overnight requests for big cases like the travel ban and Masterpiece Cakeshop v. Colorado Civil Rights Commission.

In Manhattan, Samuel is dealing with an influx of his own.

He says business often surges this time of year because tourists flood New York City looking for Hamilton tickets, cronuts (they’re still a thing), and more holiday-specific events. He’s currently recruiting line-sitters to reserve spots at the Macy’s Thanksgiving Day Parade, for which they’ll get time and a half, but have to deal with crazy crowds and frigid temperatures.

“It’s a holiday, and [employees] take jobs based on their availability and the attractiveness of pay,” he says, adding that it requires getting up early to sit along the 6th Avenue stretch and waiting until right before the parade kicks off.

Some back-of-the-envelope math: Samuel says most of his parade customers have requested sitters for about four hours on Thursday, which would usually cost $85. But Same Ole Line Dudes charges 1.5 times more because it’s a holiday, so that bumps the price up to $127.50. Add $5 an hour extra because the forecast calls for below-freezing weather, and a worker for Same Ole Line Dudes is looking at roughly $150 for a single morning of work.

The gig requires a lot of free time and patience, so it’s perfect for students and retirees. Another crucial quality is a willingness to take on jobs — as Samuel says, “It’s an easy gig to get, but it’s also easy to get let go from” if an employee doesn’t regularly fill requests.

Hromadka is looking forward to the post-Thanksgiving shopping bonanza. In previous years, people have requested spotters stand outside Target and Best Buy for Black Friday deals.

For them, paying the $100 line-waiting fee is nothing compared to the discounts they’ll get.

“We all know we can shop online, but there are a lot of stores that only offer in-store deals,” he says. “TV sets, iPhones, tablets — the bigger items that people have to come into the brick-and-mortars to get — that’s where you’re going to see the service most on Black Friday.”