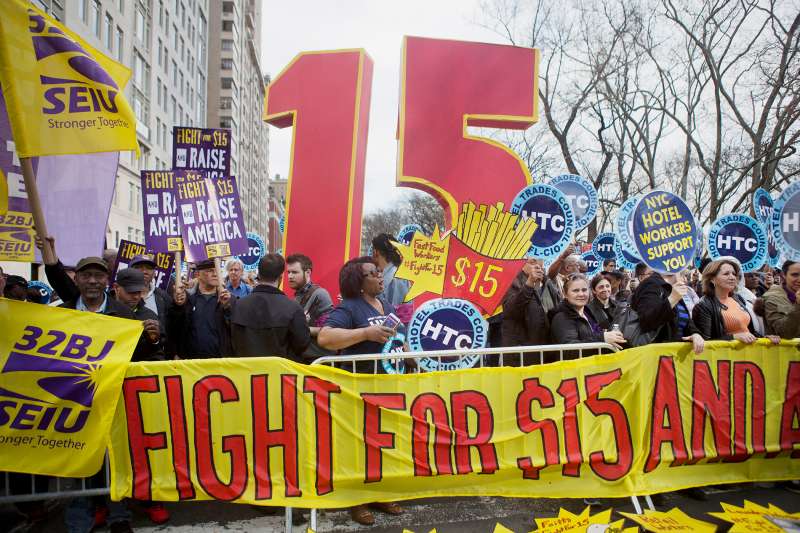 A previous "Fight for $15" rally in support of minimum wage increase was held in New York City on April 15, 2015.
Bloomberg—Bloomberg via Getty Images

A nationwide “Day of Disruption” got underway on Tuesday morning, with thousands of protesters rallying at airports and fast food restaurants around the country to push for a $15 federal minimum wage and better working conditions and benefits.

“Newly elected politicians and newly empowered corporate special interests are pushing an extremist agenda to move the country to the right,” organizers of the “Fight for $15” movement explained. “That’s why we’re taking to the streets on November 29th.”

According to the National Conference of State Legislatures, 21 states still have a minimum wage set at or below the federal minimum of $7.25 per hour. But national trends are consistently pushing hourly worker pay upward: More than a dozen states will be increasing their minimum wages at the start of 2017, and voters in Arizona, Colorado, Maine, and Washington recently approved measures to hike the minimum to at least $12 per hour in the near future.

Here are the groups participating in Tuesday’s protests:

Employees at 19 U.S. airports — including gateways in New York, Los Angeles, Washington, D.C., and Seattle — are participating in Tuesday’s Day of Disruption protests. At Chicago O’Hare, meanwhile, roughly 500 non-union airport workers, including baggage handlers, cabin cleaners, and wheelchair attendants, are expected to officially go on strike today to push for a $15 minimum wage.

Transportation officials say that the protests should not result in travel disruptions or delays for airline passengers in Chicago or anywhere else. But the strikes at O’Hare could still have some impact on travelers’ experiences. “Some planes may not get fully cleaned, and bag handling may have some snafus,” Joseph Schwieterman, a transportation expert and professor at DePaul University, explained to CNN.

The “Fight for $15” movement was launched on November 29, 2012, when a couple of hundred quick-service restaurant workers walked off the job in New York City to demand $15-per-hour wages and union rights. Exactly four years later, thousands of workers at fast-food outlets — mainly McDonald’s — are protesting in over 300 locations around the country.

Rallies are being held outside of McDonald’s restaurants in Pittsburgh, Denver, Tampa, Los Angeles, Austin, Cleveland, Kansas City, and Atlanta, among many other cities. Protest organizers say that hundreds of demonstrators have been arrested; in Detroit, for example, police arrested 39 people during Tuesday morning’s protests outside a local McDonald’s.

Hundreds of Uber drivers in roughly two dozen cities are joining Tuesday’s protests in support of better pay and the right to join unions, Reuters reported. Drivers in Denver, San Francisco, Miami, Boston, and other cities will protest by idling their cars to slow down traffic or joining marches and demonstrations with other “Fight for $15” supporters.

Hospital employees and home care aides, whose wages often fall below $15 per hour, are also joining Tuesday’s protests. One protesting home care worker is Avonne Hargrove, a 55-year-old grandmother in Philadelphia, who explained why she was joining the “Fight for $15” in an op-ed published at PennLive.com.

“Sixty-four million people like me — whether we work in health care or for some of the largest corporations in the country — are paid too little to support our families. Yet, helping families was what inspired me to join the home care profession in the first place,” she wrote. “Even though I’ve worked in the home care profession for two decades, my agency has told me that I’ve reached the maximum hourly wage — and there’s no room for growth. As the cost of living in Philadelphia keeps going up, I’m supporting my growing family on around $400 a week.”

Students, faculty, and college campus employees from schools such as Boston University, the University of Chicago, and Loyola University in Chicago are marching in protests Tuesday — and in some cases, engaging in civil disobedience in order to be arrested.