Southwest Is Sending $5,000 Checks to Passengers on Its Deadly Flight. But Is it Enough? 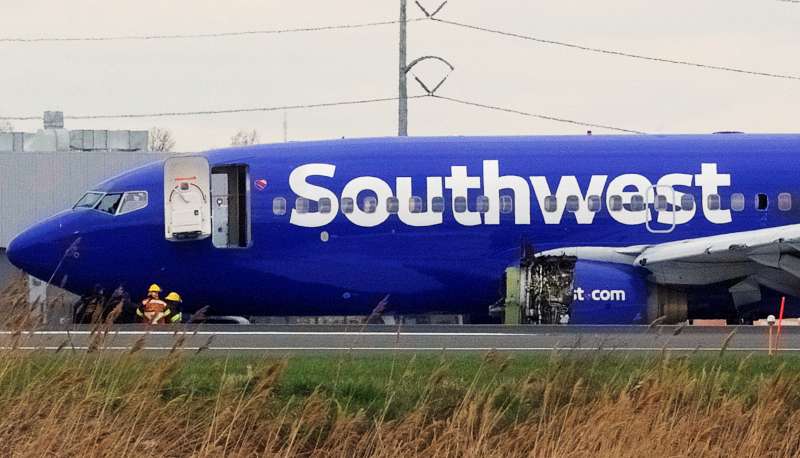 Emergency personnel monitor the damaged engine of Southwest Airlines Flight 1380, which diverted to the Philadelphia International Airport this morning after the airline crew reported damage to one of the aircraft's engines, on a runway in Philadelphia, Pennsylvania U.S. April 17, 2018.
Mark Makela—Reuters

Passengers on Southwest Airlines Flight 1380, the plane that made an emergency landing in Pennsylvania on Tuesday after an engine failure, are already receiving money to help them recover from the harrowing experience. CNN reported Friday that the airline sent at least three people on the deadly flight letters with $1,000 vouchers for future travel and $5,000 checks intended to cover “immediate financial needs.”

But the gifts may just be the beginning of the travelers’ payouts.

There were 144 passengers and five crew members on board Flight 1380, en route from New York City to Dallas, on Tuesday when its engine exploded. The blast broke a window, depressurized the cabin, sent debris flying and sucked one woman partially out of the plane as the pilot quickly landed the aircraft. She ended up being the only fatality, but seven people were injured — and most were left shaken.

As investigations into the incident continue, Southwest declined to comment to Money about its plans for compensating the survivors. The company also wouldn’t give any details about the letters and checks it reportedly sent, saying only that “the communication and gesture are authentic and heartfelt.”

Steven Levin, a founder and senior partner at the Chicago-based firm Levin & Perconti, says they’re also strategic. According to him, the Southwest check is “the financial equivalent of an immediate apology.” It’s not just a gesture of goodwill — Southwest is likely hoping the funds will persuade some upset passengers to not pursue further legal action against them.

However, Levin says passengers should be careful going forward.

“I would be very cautious, if I was a customer, in accepting a quick settlement,” he says. “I understand that they want to resolve this as quickly as possible, but an incident like this could cause longstanding psychological, as well as other, injuries.”

Levin says it’s hard to pinpoint exactly how much more money the passengers can expect to get as a result of the incident, though USA Today reported that history indicates each person could receive $250,000 or more.

Levin explains that the payouts will vary based on “how egregious the conduct was” on the part of the airline and engine manufacturer — basically, how long officials knew the plane parts weren’t safe. The funds each person gets could also be contingent upon how bad their injuries are.

Ladd Sanger, an aviation lawyer with Slack Davis Sanger in Dallas, tells Money that survivors from Flight 1380 may request damages to cover medical expenses, time off work, or therapy.

The family of the deceased passenger, New Mexico bank executive Jennifer Riordan, will likely receive the biggest payout. For comparison’s sake, the most recent accidental death on a U.S. airline was in 2009, when Colgan Air Flight 3407 crashed and killed 50 people. It resulted in 46 wrongful death suits — most of which were seven figures, according to the Buffalo News.

Sanger says most of the Flight 1380 cases will be settled without a trial. The costs will likely be shared by Southwest; the engine’s maker, CFM International; and the plane’s manufacturer, Boeing.

In that sense, the $5,000 check passengers claimed they received from the airline could be only their first.

“Some people will just be thankful they made it through this event — take the $5,000 check plus the $1,000 voucher and say, ‘I’m putting this behind me, and I’m done,'” Sanger says. “There are going to be other people that are going to be having nightmares, can’t sleep, [struggle with] job performance … those people are going to need professional counseling. Who’s going to pay for that?”