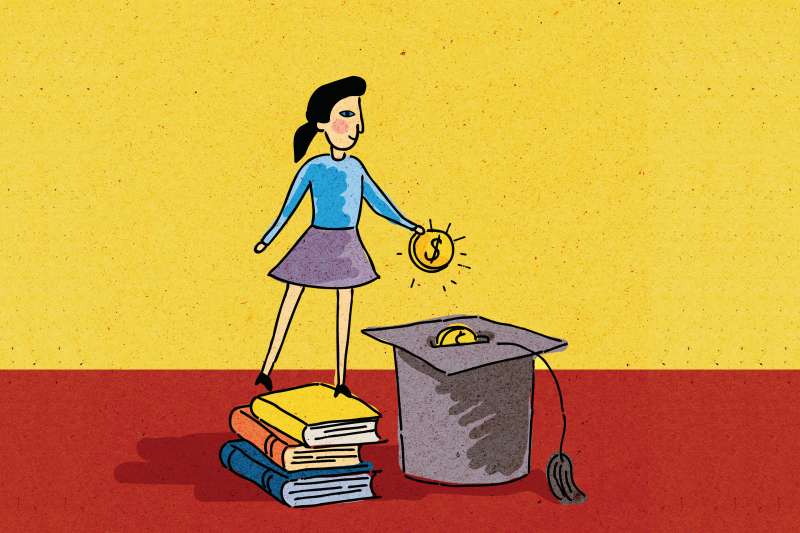 Starting college always comes with new challenges, but this year, students are up against a unique set of hurdles. From fully remote classes to strict social distancing rules to reduce the chances of a COVID-19 outbreak on campus, this fall semester will be anything but ordinary. And for many students, one of the biggest difficulties this year will be figuring out how to foot their college bills.

Several recent surveys have highlighted families’ financial concerns. In one, six out of 10 families reported a negative impact on their household budget as a result of the pandemic, with the number of families whose kids will need to use student loans as a way to pay college increasing from 42% in January to 53% in June.

Focus solely on your grades by covering your college expenses with a Student Loan.
With a Student Loan, you can worry less about tuition and devote your energy to mapping out your future. Click on your state and take the first step today.
Get Started

Another early summer survey of 76,000 incoming and current college students in California found 71% reported losing some, or all, of their income due to closures or budget cuts caused by the pandemic. Almost half of them said that their living arrangements had changed, resulting in added expenses they hadn’t planned for this fall.

Concern about being unable to pay rent and other educational expenses has “added a lot of stress that is distracting me from my academic goals,” one of the survey participants said. Another stated that her mom had lost her two jobs and, as a result, her financial plans for college had changed.

If you don’t have enough money to pay college bills, or your rent, one option is to check to see if there are additional scholarships available with your financial aid office. You might have to file an official appeal for more aid.

But if there’s no money available that way, then borrowing is one of the only other options you can explore to fill the gap — even if classes already started, and you had previously declined the federal loans that were included in your financial aid package.

Jill Desjean, a policy analyst at the National Association of Student Financial Aid Administrators (NASFAA), says that if you change your mind, you can always contact your school’s financial aid office to revisit your application and accept your federal loans, as long as you are still enrolled for the academic year that the loans were pre-approved for.

If you’re considering borrowing more, here’s a refresher on federal and Parent PLUS loans, as well as private student loans and refinancing.

If you need to borrow for college, federal student loans should be the first option you explore, as they are easy to access. They don’t require credit checks and nearly any student in good academic standing can get them. Federal loans also offer more flexible repayment options than private loans. Annual borrowing limits range between $5,500 to $12,500, depending on your school year and dependency status.

If you already maxed out federal student loans, and still need some extra cash, you can ask your parents if they’d be willing to take out a Parent PLUS loan. Parent PLUS loans have much higher limits than undergraduate loans, since your parents can borrow the equivalent of the total costs of attendance.

But because the limits are higher, parents need to be extra careful not to overborrow, as this could represent a huge financial setback down the line, especially for those who are closer to the age of retirement. It is also worth noting that since these loans are issued under your parents’ name, they do require them to pass a simple credit check in order to get approved.

Regardless of which type of federal loan you end up choosing, one of the main advantages is that they take out the guesswork of figuring out how much your interest will be, since all applicants get the same pre-established rate for that particular year on that specific loan they applied for, and you don’t have to make any payments while in school.

Due to the economic events that have taken place since the pandemic started in March, the Federal Reserve decided to cut interest rates close to zero to encourage the flow of credit to consumers. As a result, interest rates have fallen to record lows, which means that federal student loans for the 2020-2021 academic year will have the lowest rates ever.

Here’s a breakdown of the current interest rates:

Compared to last year, students will be paying 1.78% less on interest, which could save you hundreds to thousands of dollars over the life of the loan. For example, if you took an undergraduate loan last year for $7,500 with a 4.53% interest rate, and a standard 10-year repayment plan, you will be paying around $1,840 worth of interest. If you take out that same loan this year, with the same repayment plan, but with the 2.75% interest rate, you’ll only be paying $1,087 worth of interest.

Private student loans are an option to bridge the financial gap when you’ve exhausted all other types of financial aid avenues, including federal loans.

Martin Lynch, compliance manager and director of education at Cambridge Credit Counseling Corp., says students should only use private loans as a last resort, and they should be as conservative as possible with the amount borrowed.“Always max out the federal loans first,” Lynch, who also serves the Financial Counseling Association of America’s board of directors, says.

Unlike federal loans, which only have fixed interest rates, private student loans offer both fixed and variable interest rates.The specific rate you get will depend on your (or your parents’) creditworthiness. With a fixed rate, payments stay the same over the life of the loan, while with a variable rate your payments may fluctuate based on current market conditions.

The 2020-2021 school year is just around the corner. Apply NOW for a Student Loan.
With the help of lenders like Sallie Mae, you can get ahead in your studies without worrying about your finances. Click below to learn more.
Get Started

In June, the Federal Reserve announced that the federal funds target rate will remain close to zero possibly until 2022. In other words, it’s unlikely private loan rates will increase in the near future.

Here are today’s private student loan rates for undergraduate students from some of the nation’s largest lenders:

If you already have private student loans, there’s probably never been a better time to look into refinancing. With benchmark interest rates so low, your chances of securing a better interest rate are extremely high, especially if you have a good credit score of 720 or over, and a steady source of income.

Refinancing your private student loans can help you save money by lowering your interest rate. In some cases, you can also lower your monthly payment. If you have more than one loan, this can also be an option to help you consolidate multiple payments into a single one, plus it can help you release a cosigner.

Refinancing your student loan could allow you to payoff your student debt early.
Lower your interest rate or reduce your monthly payment.
Refinance Your Loans Today

When it comes to federal student loans, the situation is much different. Right now, most federal loans are in an interest-free period through the end of the year, so it doesn’t make sense to refinance federal loans until that period ends. But even after that period ends, refinancing federal loans isn’t always a smart idea. “You would lose some of the benefits, like access to forgiveness programs,” says Brenda Hicks, director of financial aid at Southwestern College in Winfield, Kansas.

“It’s really tough to beat the federal student loan rate, even if it’s an unsubsidized loan. Federal student loans are at 2.75% right now, and that’s incredible. I don’t think you’re going to be able to get a better rate than that, unless you have an incredibly good credit or a cosigner that’s amazing,”she adds. However, Hicks says that for private or parent loans, refinancing could be a good move because rates in the private sector are at all-time lows.

Here’s an example of how much you could save by refinancing your student loans: Let’s say you currently owe $10,000 on a private student loan with a 9% interest rate and 5 years remaining on the repayment term. With that loan, you’ll end up paying the balance of $10,000, in addition to $2,455 worth of interest.

Here are today’s refinancing rates from some of the nation’s top lenders:

Pay Less on Student Loans. Get More Out of Life.
Lower your interest rate or reduce your monthly payment.
Refinance My Student Loans

How Applying to College Will Be Different This Year, Thanks to the Coronavirus Pandemic

Why Isn’t Tuition Lower if Most College Classes Are Online? Good Question