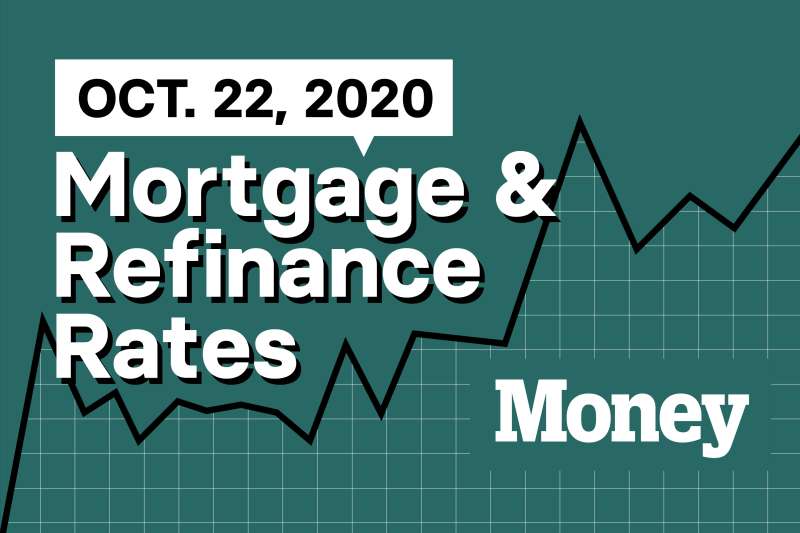 Money’s current mortgage rates include data from over 8,000 lenders across the United States and are updated daily. These rates include discount points and represent what a borrower with a 20% down payment and 700 credit scores — roughly the national average FICO score — would have been quoted.

Find your actual rate at Quicken Loans
Click below to get started and see your rate today
View Rates for January 18, 2021

Mortgage rates vary from state to state. On Wednesday, borrowers in Washington, D.C. were quoted the lowest mortgage rates — at 3.371%. People looking for mortgages in Nevada saw the highest average rate at 3.763%. Nationwide, borrowers with the highest credit scores, 740 and above, were quoted rates averaging 3.078%, while those with credit of 640 or below were shown rates of 4.755% — a 1.677 percentage-point spread.

Money’s survey also shows that the offered rate for a 30-year refinance for someone with a 740 credit score was 3.767% on Wednesday. Last October, the average mortgage rate (including fees) was 3.859%.

A homeowner with a $200,000 mortgage balance currently paying 3.859% on a 30-year could potentially cut their monthly payment from $939 to $928 by financing at the current lower rates. To determine if it’s worth it to refinance your mortgage, also consider the closing fees you paid on your current mortgage, how much your new lender is charging and how long you have left on your loan term. (Our picks for the best lenders for refinancing are here).

What else is happening in the housing market right now?

The Mortgage Bankers Association announced its forecast for 2021 on Wednesday. The industry group expects purchase loan originations to increase by 8.5% to a record-setting $1.54 trillion — surpassing the previous high of $1.51 trillion set in 2005. Refinance loan originations, however, which have seen a nearly 71% jump during 2020, are expected to fall by 46% to $946 billion.

Record-low mortgage rates have spurred a refinancing and home buying frenzy that is still going strong well past the usual home-buying season. The MBA estimates that total mortgage originations will total $3.18 trillion by the end of 2020 — the highest amount since 2003 when originations totaled $3.81 trillion. While total mortgage loan originations are expected to fall to $2.49 trillion in 2021, it would still be the second-highest total in the last 15 years.

The forecast was presented by Mike Fratantoni, chief economist, at the MBA’s 2020 Annual Conventions and Expo. The 2021 forecast is based on the assumption that a vaccine for COVID-19 will be available and help bring the pandemic under control.

“The economy, labor market, and housing market have all seen meaningful rebounds since the onset of the pandemic, but there is still profound uncertainty. Additional waves of the virus could lead to further lockdowns and more job market instability,” said Fratantoni. “On the other hand, another pandemic-related stimulus package would result in faster economic growth and additional support for the market, albeit with slightly more upward pressure on mortgage rates.”

While the future of the housing market still looks bright, the long-delayed seasonal cool-down may finally be beginning. According to Realtor.com’s Weekly Housing Report, home price growth decline slightly for the week ending October 17, while the number of available homes and the pace of sale appears to be leveling off.

“During a time when the housing market usually slows down, we are once again reminded that 2020 is anything but typical. Going into the last half of October, the median U.S. home for sale is still priced near the year’s peak and is selling almost two weeks faster than last year,” said Danielle Hale, chief economist for the home listing site. “At the same time, the pace of change has steadied and for some indicators, even slowed. This could be a welcome relief for buyers who have navigated not only a pandemic, but also a fiercely competitive 2020 homebuying season characterized by double-digit price growth and record low inventory.”

The median listing price increased 11.1% last week, the second consecutive week of price deceleration and down from the 12.9% price acceleration in the first week of October. Despite the slight decrease in listing prices, the median home price remains at an unseasonably high $350,000.

The pace of sales is still high, with homes selling 13 days faster than the same time last year. However, the pace is down by one day from last week’s 14 day pace. It’s the fourth consecutive week where homes have sold about two weeks faster than last year. While it remains a seller’s market, signs seem to be pointing to more equitable supply and demand.

Mortgage Tip of the Week

From Emanuel Santa-Donato, senior director of Capital Markets at Better.com, on setting a budget for your home search: