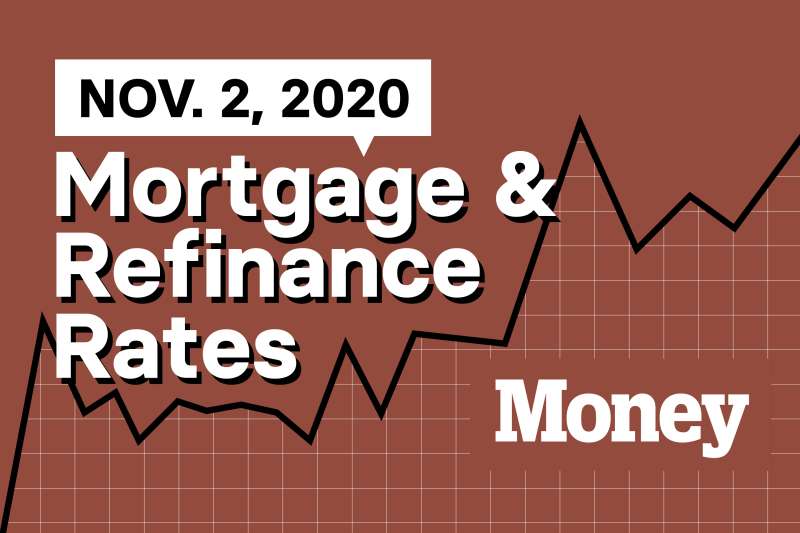 Money’s current mortgage rates include data from over 8,000 lenders across the United States and are updated daily. These rates include discount points and represent what a borrower with a 20% down payment and 700 credit scores — roughly the national average FICO score — would have been quoted.

Find your actual rate at Quicken Loans
Click below to get started and see your rate today
View Rates for January 15, 2021

Mortgage rates vary from state to state. On Friday, borrowers in Illinois were quoted the lowest mortgage rates — at 3.324%. People looking for mortgages in Nevada saw the highest average rate at 3.838%. Nationwide, borrowers with the highest credit scores, 740 and above, were quoted rates averaging 3.041%, while those with credit of 640 or below were shown rates of 4.763% — a 1.722 percentage-point spread.

Money’s survey also shows that the offered rate for a 30-year refinance for someone with a 740 credit score was 3.741% on Friday. Last October, the average mortgage rate (including fees) was 3.874%.

A homeowner with a $200,000 mortgage balance currently paying 3.874% on a 30-year could potentially cut their monthly payment from $940 to $925 by financing at the current lower rates. To determine if it’s worth it to refinance your mortgage, also consider the closing fees you paid on your current mortgage, how much your new lender is charging and how long you have left on your loan term. (Our picks for the best lenders for refinancing are here).

What else is happening in the housing market right now?

New York was next, with 47,000 more people interested in moving away. During the same period last year the gap was 35,000. Other places that saw an uptick in residents looking to move out of state were Massachusetts, Washington, D.C., and Illinois. The increase in the ability to work remotely has increased interest in areas with less population density and lower cost of living.

If you leave one state, you are likely moving into another. Florida has generated the highest interest, as 22,000 more people are interested in moving into the state than want to move out, almost twice as many as in 2019 and the highest inflow for the state since 2017. Texas, Tennessee, North Carolina, and Nevada also saw more inbound interest.

“New York’s loss is Florida’s gain. When the pandemic hit the U.S. in March, remote workers started leaving New York City and its ultra-expensive housing in search of wide-open spaces, sunshine, and affordable homes — all of which you can find in Florida, with the bonus of no state income tax,” said Tayor Marr, Redfin Economist. “The trend has only intensified as the pandemic continues and people feel more certain of their remote work and school plans.”

Mortgage Term of the Week

Understanding the lingo can be key to avoiding mistakes when you are buying a home or refinancing your mortgage. For more read: Everything You Need to Know About Mortgage Rates in 2020.

Closing Statement: A report issued at closing that gives an account of the money paid and received at closing and includes information on escrow deposits, hazard insurance, and mortgage insurance.