Today's Mortgage and Refinance Rates for November 7 and 8 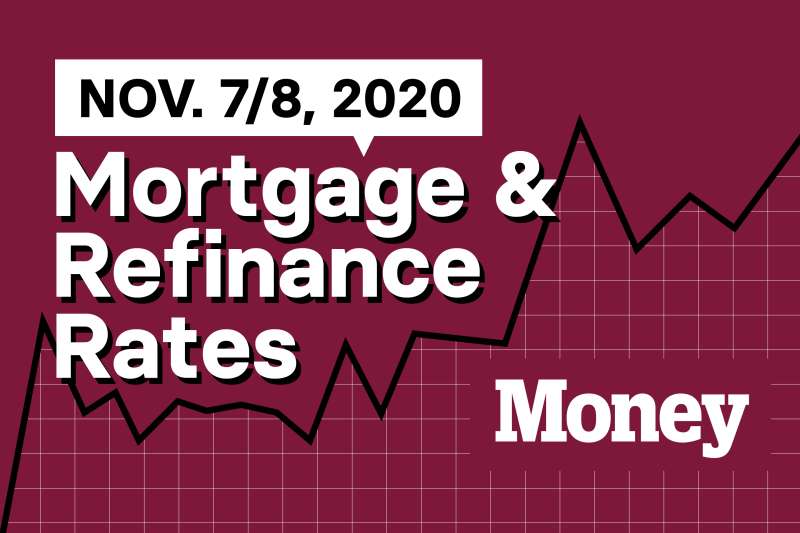 Money’s most recent mortgage rates include data from over 8,000 lenders across the United States and are updated daily. These rates include discount points and represent what a borrower with a 20% down payment and 700 credit scores — roughly the national average FICO score — would have been quoted.

Find your actual rate at Quicken Loans
Click below to get started and see your rate today
View Rates for January 19, 2021

Mortgage rates vary from state to state. On Thursday, borrowers in Alaska were quoted the lowest mortgage rates — at 3.17%. People looking for mortgages in Nevada saw the highest average rate at 3.734%. Nationwide, borrowers with the highest credit scores, 740 and above, were quoted rates averaging 2.901%, while those with credit of 640 or below were shown rates of 4.641% — a 1.74 percentage-point spread.

Freddie Mac’s widely quoted Primary Mortgage Market Survey put rates at 2.78% with 0.6 points paid for the week ending November 5, a new record low and the twelfth time this year interest rates have set a historic low. The mortgage purchaser’s weekly survey reflects borrowers who put 20% down on conforming loans and have excellent credit.

Money’s most recent survey also shows that the offered rate for a 30-year refinance for someone with a 740 credit score was 3.641% on Thursday. Last November, the average mortgage rate (including fees) was 3.874%.

A homeowner with a $200,000 mortgage balance currently paying 3.874% on a 30-year could potentially cut their monthly payment from $940 to $914 by financing at the current lower rates. To determine if it’s worth it to refinance your mortgage, also consider the closing fees you paid on your current mortgage, how much your new lender is charging and how long you have left on your loan term. (Our picks for the best lenders for refinancing are here).

The Week in Review

The average rate charged for a 30-year fixed rate mortgage hit a new record low of 2.78%, according to Freddie Mac. It was the 12th time this year that rates have set a new low — and third time in four weeks. Low interest rates have helped keep the housing market active, as homebuyers take advantage of increased buying power to invest in more spacious homes and homeowners refinance existing mortgages to save on monthly payments.

According to real estate data firm Black Knight, lenders are on track to originate a record number of mortgages in the third quarter. The data indicates that refinance originations could be at least 25% higher than the previous quarter, while purchase loan originations could be at least 35% higher. If the pattern holds, 2020 could see a new record for refinancing. Purchase loan activity could reach the highest level since 2005. This year, the total volume of mortgage lending is on pace to surpass the $4 trillion mark for the first time in history.

Meanwhile, the total volume of loan applications increased by 3.8% during the week ending October 30, according to the Mortgage Bankers Association. Refinance loans led the way, increasing by 6% and making up about 69% of all loan volume. Purchase loans, however, declined by 1%. Both types of loans continue to be well above year-ago levels, up 88% and 25% respectively.

Median listing prices remained close to their summertime high of $350,000, according to Realtor.com. In a normal year, list prices decrease between 1% and 4% from their summertime peak by October. Prices were up 12.2% year-over-year. The Northeast saw the largest increase (11.4%), followed by the West (10%), the Midwest (9%), and the South (7.3%). While prices saw double-digit gains on a national level, within the 50 largest metro areas the story was a little different. Home prices grew by 8.9%, slightly down from the 9.2% September growth.

According to CoreLogic, home sale prices accelerated by 6.7% year-over-year in September, the fastest annual pace since May of 2014. Month-over-month, prices increased by a little over 1% from August. The surge in prices is the result of a prolonged period of record-low mortgage rates coupled with very tight housing supply. As prices start to push homes out of reach and inventory starts to catch up with demand, CoreLogic is forecasting price acceleration to drop to 0.2% during the next twelve months.

As social distancing and remote work have become the standard for many, more people were looking to leave high density, high cost-of-living areas for more wide-open spaces, and affordable housing. According to real estate brokerage Redfin, data from third quarter searches indicated that 53,000 more people were interested in moving out of California than there were people interested in moving into the state. That’s a 62% increase from the third quarter of 2019, and the highest rate since Redfin started keeping track of migration patterns in 2017.

New York was the next, with 47,000 more people interested in moving out of the state than those moving in, up from 35,000 during the third quarter last year. Massachusetts, Illinois, and Washington, D.C. rounded out the top five states where more people wanted to migrate out.

On the other hand, 22,000 more people interested in moving in to Florida than moving out of the state. It’s the highest net-inflow for the state since 2017 and nearly twice as many people as in 2019. Other states attracting inbound attention were Texas, Tennessee, North Carolina, and Nevada.

The pace of sales continued at a higher than usual pace in October, according to Realtor.com. Homes sold in an average of 53 days, one day faster than in September and 13 days faster than last October. It’s the first time since 2011 that homes have sold faster in October than in September. The pace of sales was even faster in the larger metro areas, where homes sold in an average of 45 days. Hartford, Virginia Beach, and San Diego all saw homes sell more than 20 days faster than last year.

Inventory is still tight, as high buyer demand has not only driven prices up but also put a dent into an already limited housing supply. Overall, inventory was 38% below 2019 levels, with an estimated 500,000 fewer homes available for sale. However, new listings seem to be making their way back into the market. In September, there were 13.8% fewer new listings available than in 2019. By October, that deficit had been cut to 7.7%.

The tight housing supply and rising prices have also had an effect on affordability, which has dropped to its lowest level in two years. According to the National Association of Home Builders, 58% of homes sold during the third quarter of 2020 were affordable for families earning the adjusted median income of $72,900, down from 59% during the second quarter.

The number of mortgage loans in forbearance plan decreased 7 basis points to 5.83% of all loans, according to the MBA. The data, which is for the week ending October 25, indicates that the decline occurred across all mortgage types, with the share of Fannie Mae and Freddie Mac loans declining for the 21st straight week. The MBA estimates there are still 2.9 million homeowners taking advantage of the payment deferral plans.

Of the homeowners who have exited the program, almost half have either remained current on their loans while in forbearance or were reinstated after paying all past due amounts. Of the loans that do remain in forbearance, 24% were in the initial stages, 74% were in an extension period, and 1.56% had exited forbearance and re-entered the plan.

The U.S. labor market continues to show a steady but slow improvement in October. According to the U.S. Bureau of Labor Statistics, the economy added 638,000 jobs, better than the 580,000 economists had expected. The unemployment rate dropped to 6.9%. Most of the gains were in some of the industries hardest hit by the pandemic, such as retail, leisure, and hospitality. The number of unemployed fell 1.5 million to 11.1 million. However, the number of unemployed remains well above pre-pandemic levels, indicating there is still a long way to go before a full recovery.