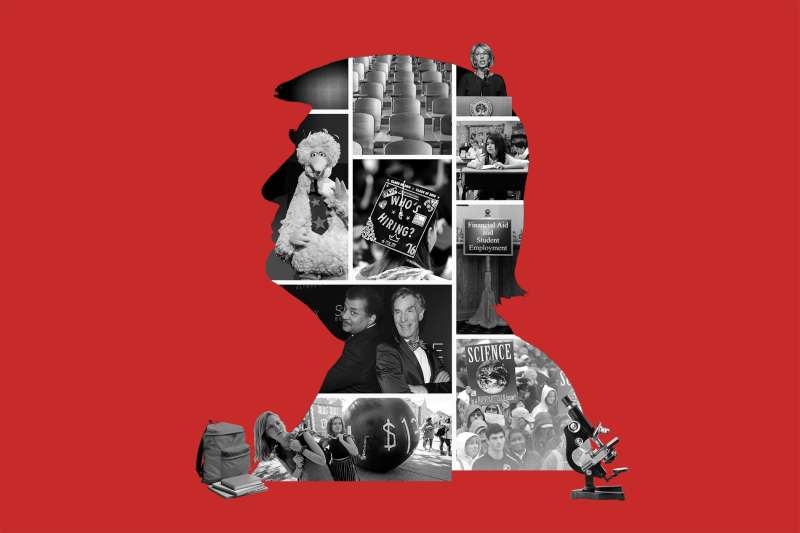 During the 2016 election, elementary, middle and high school teachers from across the United States said it was very difficult to remove politics from the classroom. And things haven’t gotten much better.

Teachers now say it can be challenging in a time of “alternative facts” to teach students to distinguish truth. Science teachers, who feel under attack as part of a larger war on science, feel they must continue to cite data on climate change even if the administration disagrees. Still, their colleagues are excited by the possibility a Trump administration could disrupt public education for the better. Perhaps the biggest controversy in this area during Trump’s first 100 days in office came with his appointment of Betsy DeVos for Secretary of Education, a billionaire with no experience in the public school system.

Money spoke with five different teachers across the U.S. and asked them to grade the president’s performance. Below are their answers.

“I gave him a C- because he’s come through for a few or some of his constituents, but he hasn’t completed the entire assignment. I feel like the assignment was to be suddenly Presidential for the whole country. I thought maybe, being that so many of his constituents come from poorer or middle class backgrounds, he would have crafted polices out of a fear that they would hold him accountable. But that doesn’t seem to be the case. He doesn’t even seem to care about that demographic. I think the part of the assignment that he did complete, is the business deregulation, the attempts to roll back the EPA, the attempts to bolster the military budget, but we saw that coming. He made sure to cover himself, and I think that is why the grade is a C- minus. He’s done just enough, to say I did a few things.”

“I think things were what we expected them to be. We knew that he was going to overhaul health care, and obviously, that didn’t go through. We knew with the Supreme Court he was going to put a conservative person in there. My thing was that we had to grow the economy, and I do feel like it’s heading in the right direction.

I know there is a new Education Secretary, Betsy DeVos, and there are teachers at my school who were worried because she had never been in public school. But education is so big that systematic changes affecting the entire country, would be way, way, down the pike. I am still going to school and teaching the kids, and that’s my job, and so I try not to worry about all the other stuff. My take is it really doesn’t matter who the President is. When it comes to money, if you do what you are supposed to do, and you budget, and spend less than you earn, you are going to be ok. Unfortunately, a lot of people get so caught up in the idea that whoever gets elected is going to change their lives, but I feel you are in charge of your own success.”

“I almost feel like it is one of those things where there is not enough information. Some things I am really excited about and other things I am a little more worried about or skeptical. I am excited about a stronger, tougher stand in foreign policy. I think, like a lot of people, I have been sickened and horrified by what I see in Syria, and have thought that a stronger hand is probably a better response.

When I became a teacher, I had to do a lot of observations, and I saw a lot of public school teachers with the curriculum that was being shoved down their throats. They really hated it. And that was about 9 years ago, and nothing has really changed. I am hoping because we have a brand-new person, who if nothing, has to be very open minded about the idea that everything can be changed and nothing is a sacred cow that can’t be touched.”

“He gets a solid F. In terms of education, Betsy DeVos is probably the worst human being possible to be in charge of the education department, and they really are the enemy of public education.

Politics definitely comes up in the classroom, especially in an environmental class. My class is very politically sensitive. These are upper level kids, so I don’t have any problem putting curriculum on hold and having an open discussion with them. It is really important for them to see all sides. A lot of times they just repeat what their parents have told them. And they don’t really have all the facts. I have told my students over and over again that we are marching very quickly into a time of a war on science and I honestly do not understand where it is coming from. I do not understand why people are scared of science. All of a sudden science is evil like we are back in the Middle Ages again.”

“He is failing badly, I’d give him an F. First of all, his pick for Secretary of Education Betsy DeVos is someone I would never want in charge of a school, much less a classroom. Also, it is hard to show my students here is what the Constitution says, and here is what happened instead.

For example, with the nomination to the Supreme Court we had to go over how the Constitution provides for the different powers of government, and why we didn’t already have a ninth justice even though Antonin Scalia died a year ago, and what it meant for the nuclear option to be pulled. The same week, we launched our attack on Syria, and we had to go over the question of whether the President has the power to declare war. And the way that Trump, and Kellyanne Conway, and Sean Spicer react to the media spreading fake news, it makes it very hard to distinguish what they are saying, versus what is actually happening without getting political. Because if I directly oppose the president it’s a political act, even though I am trying to give my students a sense of what is truth, and how do you determine truth.”