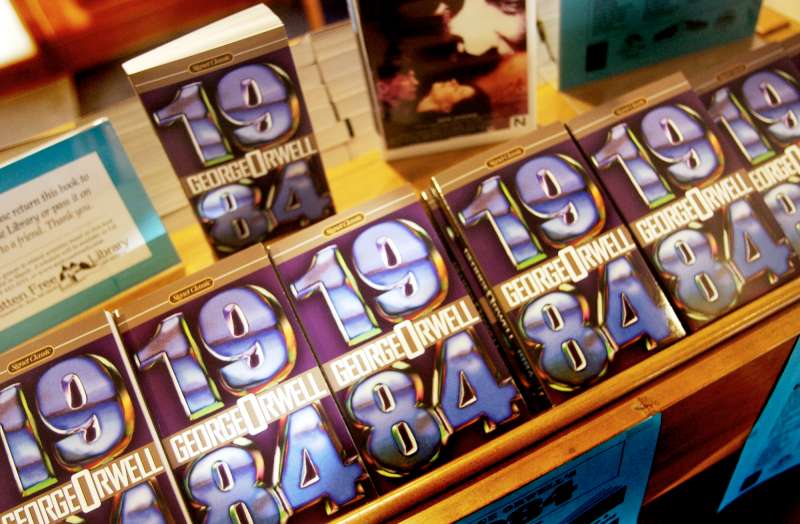 It’s widely known that President Donald Trump is not a big reader. He hasn’t read any presidential biographies, asks for long reports to be boiled down to a few short pages, and frequently “gets bored and likes to watch TV,” Politico recently reported.

Nonetheless, Trump’s rise in politics has been accompanied by a swift rise in book sales—well, for certain books anyway. After Trump counselor Kellyanne Conway said White House press secretary Sean Spicer had used “alternative facts” over the weekend regarding the size of the inauguration audience, many noted that the phrase seemed like something straight out of George Orwell’s 1984. And sales of the classic dystopian novel, which portrays a terrifying totalitarian future in which the government spews propaganda like “Ignorance Is Strength,” have skyrocketed since then.

1984 became the #1 best-selling book on Amazon this week, nearly 70 years after it was first published. Penguin Books just ordered a reprint of 75,000 more copies of the book to keep up with surging demand.

But 1984 isn’t the only book experiencing a “Trump Bump.” In Amazon’s Classic Literature & Fiction category, 12 out of the top-selling 20 titles have been used recently as reference points for understanding the rise of Trump and his administration. Five of these entries are different editions of 1984, it should be noted, but other bleak works describing alternate realities ruled by totalitarian and fascist regimes have seen sales increase swiftly as well. Here are some of the fresh bestsellers inspired (inadvertently) by Trump.

Interestingly, at the end of 2015, when current Trump strategist Steve Bannon was still head of the alt-right publication Breitbart.com, the site called attention to the fact that 1984 was one of the year’s top 10 bestselling books in Russia. “That the Russians have turned to Orwell is quite telling,” the site wrote at the time. “They know totalitarianism when they see it.”

As of Wednesday, 1984 is Amazon’s bestselling book overall. For the sake of comparison, it was the #89 bestseller on Amazon in 2015.

Meanwhile, two versions of Orwell’s Animal Farm, the political allegory that serves as a screed against tyranny, are also among Amazon’s top 20 bestselling works of Classic Literature.

Lewis’s satirical political novel, published in 1935 as the Nazis rose to power in Germany, tells of a fascist takeover in America. Buzz Windrip, the book’s populist, authoritarian demagogue protagonist, has been compared to Trump many times in recent years, and some say the novel basically predicted Trump’s rise in politics.

Just after Trump won the 2016 election, the book was so popular it was listed as entirely sold out by many online sellers. As of Wednesday, It Can’t Happen Here was ranked #5 in Amazon’s Classic Literature category, and #26 overall. It wasn’t in the top 100 for sales in 2015.

Often compared to 1984, Brave New World, published in 1932, foretells a dystopian future in which the people are manipulated and controlled by way of entertainment, distraction, and drugs. It currently ranks #6 in Amazon’s Classic Literature, and the #28 bestselling book overall. Brave New World wasn’t in the top 100 for sales in 2015.

The Kindle editions of Brave New World and another Huxley book, Island, which also serves as a warning against dangers such as ignorance in politics and totalitarianism, are in Amazon’s Classic Literature top 20 right now as well.

In Fahrenheit 451, published in 1953, one of the characters says that “the word ‘intellectual’ became the swear word it deserved to be.” The observation “seems astonishingly prescient during this run-up to the 2016 presidential election,” the New York Times noted in late 2015.

Set in the 24th century, when books are considered evil and people are controlled by censorship, propaganda, and TV, Bradbury’s novel ranked #7 in Amazon’s Classic Literature category, and #33 overall as of Wednesday. For all of 2015, Fahrenheit 451 was Amazon’s #66 bestselling book.