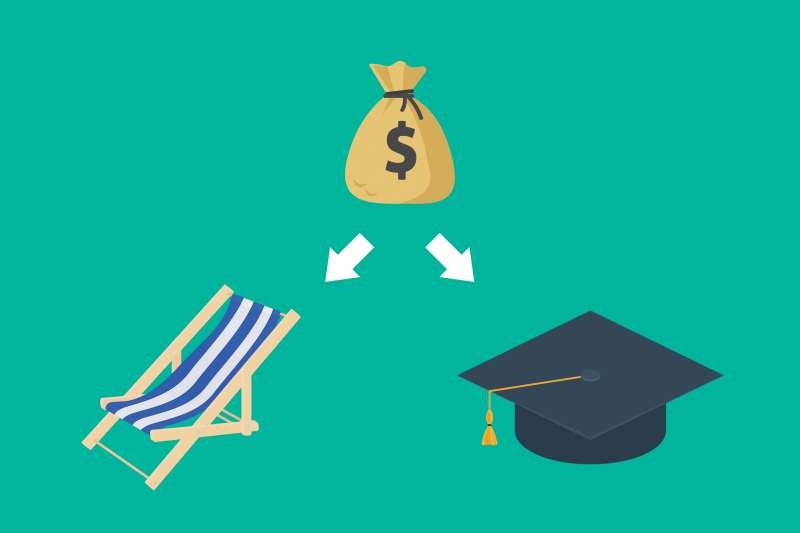 If you have student loans to pay back, you’re in good company. You’re also probably falling behind your debt-free peers when it comes to saving for retirement.

Millennials who have never taken out student loans have saved twice as much for retirement by age 30 as college graduates who carry a debt load, according to a new study conducted by the Center for Retirement Research at Boston College. That amounts to $18,200 in retirement savings for debt-free college graduates at age 30, versus $9,100 for 30-year-olds with an average loan balance of $16,230.

In just a over a decade, the number of college students taking out loans has tripled. Sixty-three percent of 18-29 year-olds and 53% of 30-44 year-olds have taken out student loans to finance their educations, according to the Federal Reserve. This burden sets young people back in other ways as well: Millennials with student debt generally have a lower net worth than those who do not, as well as an increased risk of bankruptcy.

Surprisingly, the study found that the amount of student loan debt that borrowers hold isn’t a factor when it comes to hampering retirement savings; any debt at all still prevented them from meaningfully saving.

“The mere existence of the debt is enough to constrain saving,” the authors wrote. “Even if the payments are manageable, the lingering presence of a student loan may loom large over other financial decisions.”

In other words, even if a student only takes out a small loan, he or she may decide to prioritize paying it off in full before switching gears toward saving for retirement or buying a house.

That’s not necessarily the best financial move, Blair duQuesnay, a financial planner at Ritholtz Weath Management, tells Money. As hard as it can be on entry-level salaries, it’s important to set at least a little aside for retirement while still meeting your student loan obligations.

“Start saving immediately and don’t delay,” she says. “Even a small amount of retirement savings helps.” Student loan debt generally has lower interest rates than other kinds of debt like credit card debt, so making the minimum payment every month while also contributing to your 401(k) is often a wiser move than only focusing on paying off your loans. You miss out on the power of compound interest by neglecting your 401(k), and it’s harder to make up the years of lost savings.

Despite the huge savings gap between non-borrowers and borrowers by age 30, workers with college degrees still have higher incomes — as well as higher earning potential for the rest of their lives — than those without degrees.

So if you’re carrying student loan debt and still haven’t started saving for retirement, don’t beat yourself up, says duQuesnay. There are a few simple things you can do to get on track:

If your employer has a 401(k) match program, contribute at least the minimum amount to get the full match in your 401(k).

If you don’t have a 401(k) plan through your employer, you should sign up for a traditional IRA or Roth IRA using an online brokerage or investment firm, duQuesnay suggests.

Regardless of your savings plan, some of life’s biggest essential expenses are housing and transportation, so keep those in check from the get go, she advises.

“If you can’t get those two things right it’s almost impossible to avoid Starbucks or nickel and dime your way to savings,” she says. “So it’s really important to focus on those big ticket items to make some sacrifices while you’re young, to set yourself up for more freedom later on.”