Saddest Scam of the Season? Paying Thousands for Dogs That Don't Exist 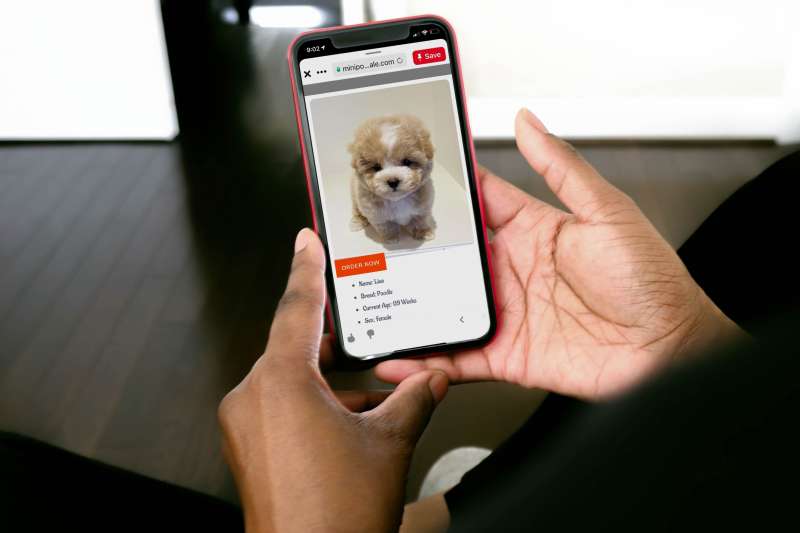 It was nine months after Tammie McQuain’s dog passed away that she finally felt ready for a new furry friend.

The Los Angeles-based 51-year-old found a photo of a fluffy little teacup poodle on Pinterest named “Lisa,” and clicked through to a website called MiniPoodlePupsForSale.Com.

The site didn’t have a phone number, which McQuain says she found “a bit odd,” but it did have a detailed application form. So she filled out a contract the site sent her, agreeing to pay $500 via Zelle for transporting the dog to her home.

“They had all the steps that you think should be there,” she says.

At 3 a.m. the next morning, McQuain got an email from MiniPoodlePups asking her to pay $1,500 for “insurance.” They told her that since the dog was now hers, they’d turn her into authorities for endangerment if she didn’t fork it over.

Realizing she’d been had, McQuain contacted her bank and the police to try to get her $500 back — to no avail.

“It could have been way worse,” McQuain admits, but she’s still frustrated. And she’s not alone.

While online, your personal information is constantly exposed to bad actors. Protect your identity TODAY.
Don't fall prey to cybercriminals looking to steal your hard-earned dollars. Find the best Identity Theft Protection now by clicking on your state.
Get Started

As the days grow colder and pandemic social distancing stretches into the holiday season, many Americans are turning to animal companionship as a sort of isolation salve. Adoption rates are soaring across the country: Nielsen research reports “numerous stories of fostering facilities and shelters going empty.” Meanwhile, scammers are targeting prospective pet parents with fake websites, offering dogs that don’t actually exist.

This scam isn’t brand new, says Josh Kreinberg, Chief Administrative Officer at PuppySpot, which has vetted breeders (and people reporting to be breeders) since 2016. But there’s been a marked increase in complaints about fake dog websites—at the tune of about 20 new sites a month, he estimates—since the beginning of 2020.

“Prior to the pandemic, even in the holiday season, we didn’t see as many,” he says.

Here’s how the scam typically plays out, according to Kreinberg. After happening upon a fake site through social media or Google, and falling for one of the dogs, the victim reaches out about arranging an adoption.

“Once they have you hooked in with cute puppy photos, a conversation via email, text, or a messenger app ensues,” he says. “This is typically where the money requests begin.”

Soon, the scammer will request payment for the pup — usually through a money transfer from a company like Western Union, or an app like Zelle, CashApp, or Venmo.

“Scammers are never upfront with what the full cost is going to be,” Kreinberg adds. Many will come up with “bogus excuses as to why your puppy can’t come home, or how they need additional funds for a special travel carrier,” he says. “This is usually around the time the buyer becomes skeptical and realizes they have been scammed. Unfortunately, at this point, they are out several hundred or thousand dollars with no puppy in sight.”

It’s a traumatic experience that, for victims like McQuain, is enough to give up on the adoption process entirely — which, in the end, deprives a real dog of a potential home.

Still, in many parts of the U.S., travel restrictions and mandatory quarantines have made it next to impossible to visit an animal shelter or dog breeder in person. If you’re dead-set on getting a new pooch this holiday season, Kreinberg advises doing as much research as you can before dipping into your pocket.

“Trust but verify,” he says.

Here are some red flags to look out for.

The vast majority of scamming websites Kreinberg has seen come from foreign countries, where English isn’t the primary language. So be on the lookout for noticeably bad grammar, misspellings, and other gaffes.

If you see a dog that strikes your fancy, copy or download the photo and run it through Google Images (i.e., a “reverse image search”) to see if it’s also posted on another site. Scammers often scrape pictures from legitimate services, so if the same photo shows up in multiple places, it’s probably a racket. Also, be wary of photos that are overly-posed, look Photoshopped, or like a stock image, Kreinberg says.

Nearly every credit card company offers customer protection, which is why scammers prefer that you wire money through a cash app or transfer company like Western Union or MoneyGram instead. If a service refuses to take your credit card, Kreinberg says, “they are likely a scam.”

If the company won’t provide registration, vaccination, and veterinary health records upon request, or if they ask for money before providing any of that information, you’re almost certainly getting scammed.

Do some research on what the average cost is for a particular breed. If the dog is offered at a much lower price than the average market value, that’s a warning sign.

So is asking for additional payments after the original fee has been processed. Sites like “MiniPoodlePups,” which still features a picture of sweet little “Lisa” on its homepage, and Julian Shepherd Pups, which new complaints have recently put on Kreinberg’s radar, demand more and more money until the buyer eventually gets hip to their scheme.

Protect yourself from the threat of Identity Theft.
With comprehensive and affordable Identity Theft Protection software, Identity Guard will secure your personal information. Click below to get the protection you deserve.
Get Started

The 10 Best Places to Live for Dog Lovers

What Is Identity Theft, Exactly?

The Best Knife Sharpeners for Your Money