Will Bringing Back a 1930s Banking Law Really Make Us Safer? 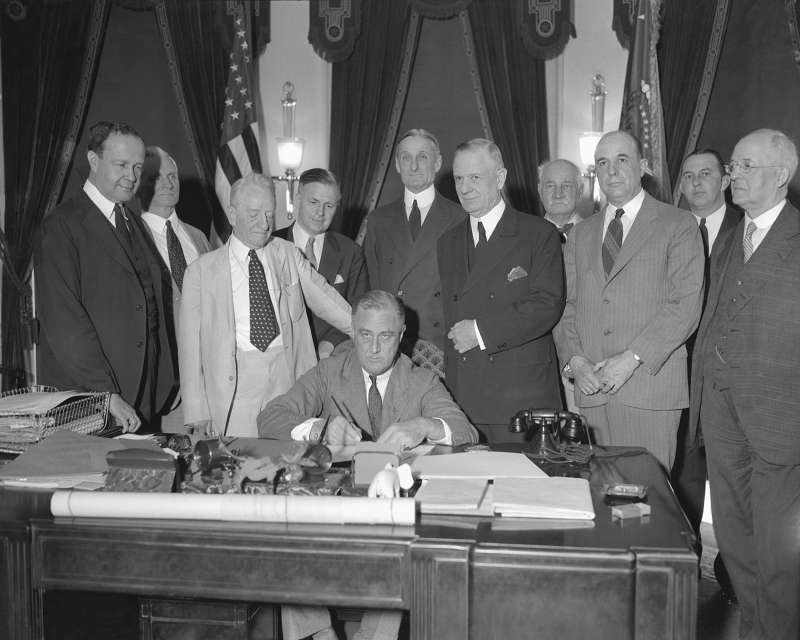 Rumbling public ire over big banks has both political parties calling for the resurrection of a Depression-era law known as Glass-Steagall.

Fans of the statute say it did a great job preventing financial disasters until it was deep-sixed in 1999—and that the near-apocalyptic 2008 financial crisis was the result.

Now, members of both parties are calling for some form of Glass-Steagall to be restored. On the GOP side, that includes presidential nominee Donald Trump, who successfully pushed for its inclusion in the Republican platform. (He also, somewhat incongruously, wants to ax the Dodd-Frank restrictions on Wall Street.) But Glass-Steagall nostalgia is felt more broadly among Republicans: Sen. John McCain, for example, no Trump follower he, is a fan.

On the Democratic side, Hillary Clinton has not called for bringing back Glass-Steagall per se. But restoration of Glass-Steagall was a key part of Bernie Sanders’ anti-Wall Street crusade, and Clinton hopes to lure the fired-up voters who supported Sanders. Sen. Elizabeth Warren, who endorsed Clinton at last week’s convention, is also a proponent. And the Democratic party platform does call for “an updated and modernized version” of the 83-year-old statute.

But what is Glass-Steagall? And, more importantly, would its reinstatement really insulate us from future financial pandemics?

What is Glass-Steagall, anyway?

The twin traumas of the 1929 market crash and the ensuing Great Depression, when myriad banks failed and depositors were left with nothing, led to this landmark legislation. Two Democratic lawmakers, Sen. Carter Glass of Virginia and Rep. Henry Steagall of Alabama, sponsored the bill, in the hopes that it would prevent more financial catastrophes from bedeviling the nation again. In 1933, President Franklin D. Roosevelt signed it into law.

Glass-Steagall’s signal provision prevented commercial banks, which accept deposits and make loans, from also underwriting and selling securities, such as stocks and bonds—an activity called investment banking. This would, in theory, prevent banks from using regular folks’ deposits to gamble on speculative stuff like the stock market, only to see everything go spectacularly wrong, with the hapless depositors cast out of their homes and onto bread lines.

Throughout the prosperous decades following World War II, the banks thrived. But as the financial sector grew in size and power, banks gradually whittled away at the law’s prohibitions. By the 1980s, regulators had started permitting exceptions to the investment-banking ban. Citigroup , for instance, bought investment house Salomon Smith Barney in 1998.

Amid arguments that an eroded Glass-Steagall was outdated, Congress in 1999 voted to kill it. Hillary Clinton’s husband Bill signed the repeal. Some vestiges of Glass-Steagall were allowed to remain in effect, notably federal deposit insurance on amounts up to $250,000.

What a modern version of Glass-Steagall would look like is a matter of conjecture. It might, for instance, stop banks from using so-called derivatives, which are securities based on underlying assets. But it might not, given the banking industry’s influence on Capitol Hill. After all, many strictures in Dodd-Frank got watered down.

The argument for a Glass-Steagall encore

During the hellish days of the 2008 financial crisis, Washington was forced to bail out major banks, to the tune of $250 billion, with another $225 billion in help for the auto industry and others. Essentially, the U.S. Treasury bought troubled assets, like subprime mortgages, from ailing banks.

The justification for such an enormous federal outlay was that the banks were too big to fail: Letting them go under would cause the world’s economy to seize up and usher in a second Great Depression.

A revived Glass-Steagall presumably would whittle down the large banks in size, thus making any future rescue less costly to the government— and less dangerous to the economy if a federal bailout failed. Giant Bank of America , for example, might be forced to divest its brokerage arm, Merrill Lynch. And if Glass-Steagall fans managed also to bar banks from risky activities, such as dealing in exotic financial contraptions like credit default swaps—derivative that functions like insurance against debt defaults—they would be less likely to be in harm’s way in the first place.

Since the crisis, Dodd-Frank has made the mega-banks safer, by (among other things) requiring that they have more capital on hand, which would allow them to better withstand losses. Nevertheless, these banks are larger than ever, thanks to rampant crisis-driven consolidation, when they bought up damaged lenders teetering on collapse, like the $15 billion acquisition of Wachovia by Wells Fargo .

As a result, the Bernie Sanders campaign complained that “too-big-to-fail banks are bigger, riskier, and more ungovernable than ever” — with the six largest U.S. banks issuing over two thirds of credit cards and a third of all mortgages, plus controlling 95% of all derivatives and 40% of deposits.

That magnitude gives the behemoth banks even greater lobbying clout in Washington than before, their detractors say. “Under the old regime, commercial banks, investment banks, and insurance companies had different agendas, so their lobbying efforts tended to offset one another,” contends Luigi Zingales, a professor at the University of Chicago’s Booth School of Business. “But after the restrictions ended, the interests of all the major players were aligned.”

The truth is that banks are only one player in the financial arena—though arguably the most vital one, because they are the primary source of lending to the public. Opponents of a rejuvenating Glass-Steagall point out that the precipitating event of the 2008 crisis was the collapse of Lehman Brothers, an investment house that had gorged on subprime mortgage investments. It was not a commercial bank, so it had zero depositors and no claim on federal deposit insurance, meaning Glass-Steagall would not have governed its behavior and therefore would not have prevented its collapse.

In fact, most of the epic financial disintegrations that followed—at massive mortgage guarantors Freddie Mac and Fannie Mae, insurance titan American International Group , and investment firm Bear Stearns—would not have been prevented by Glass-Steagall.

To Aaron Klein, a Brookings Institution fellow, reinstating the 1933 act “would break Citigroup and JPMorgan Chase into smaller pieces. But Glass-Steagall would not materially change Goldman Sachs, Morgan Stanley, or the $2.7 trillion hedge fund industry.”

While Wall Street firms like Morgan Stanley would not have to divest a commercial bank, Goldman Sachs , which just started a small retail banking operation, would. GS Bank, however, has less than 2% of its parent’s assets, muting the impact of its departure.

The impact of Glass-Steagall’s comeback

To be sure, super-sized commercial banks like JPMorgan Chase could well see their trafficking in razzle-dazzle trading curbed under a new Glass-Steagall. In 2012, JPMorgan suffered a $2 billion loss from ill-fated trading involving derivatives.

But a review of how the banks came to grief in 2008 shows that they are perfectly capable of running into horrible trouble under the renewed auspices of that now-venerated New Deal legislation. The ones that got into the biggest jams eight years ago can blame Glass-Steagall-approved activities: buying other lenders. Alas, those acquisitions turned out to be laden with toxic mortgages.

The worst of the worst has been Bank of America, which bought subprime lender Countrywide Financial in early 2008—and went on to lose more than $50 billion in its mortgage business as a consequence. This gaping wound has hindered BofA’s growth to this day.

So Main Street banking’s foibles often have had no relation to Wall Street hustling. And no replaying of an FDR golden oldie will change that.