How to Keep Your Bedroom Cool (and Cute!) During the Summer Without Cranking the A/C 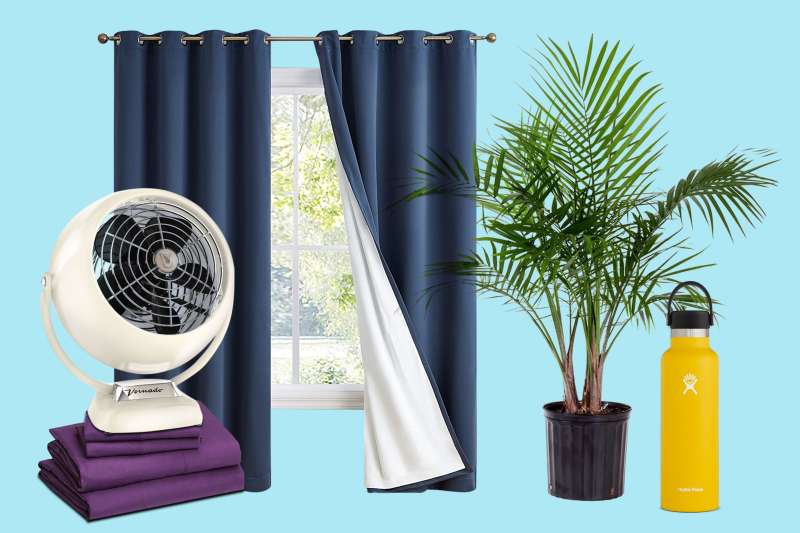 It’s summertime and the living is, admittedly, not so easy. COVID-19 has left many shuttered inside during a season when they’d usually be out and about, hitting the beach or sipping margaritas after work with friends. The combination of cabin fever and sweltering heat is enough for anyone — myself included — to lose sleep.

At some point during quarantine, I became acutely aware of the fact that I had been constantly turning on my air conditioner for well over a week. I wasn’t sleeping well, and my bedroom seemed to grow more and more suffocating by the minute.

According to Jacqueline Kennedy, a clinical psychologist and founder of NYC Sleep Doctor, people tend to get worse sleep during the summer. This is due in part to the hot temperatures that lead to discomfort, but also because the increased sunlight prevents our bodies from naturally releasing melatonin.

Your sleep is only as good as your mattress. Find the best one today.
Keeping your spine in a neutral position will help you get a good night's sleep. A great mattress is the way to go. Click on your state to see your options.
Get a Good Night's Sleep

“Our bodies respond to light even when our eyes are closed, and that in turn wakes us up,” says Kennedy.

There are also plenty of internal factors that can lead to bad sleep during the summer, especially for women, whose body temperatures fluctuate due to hormones, says Kennedy. Premenstrual syndrome, ovulation, and pregnancy can all lead to higher internal temperatures that are only exacerbated by summer heat.

So it’s reasonable to feel a little bit miserable after a restless night, even when the sun is shining and birds are chirping. But rather than resign myself to feeling cranky and exhausted all summer, I took it upon myself to find the components in my bedroom that were making the problem worse — and replace them with items that are more stylish and, most importantly, cooler (in both senses of the word).

Here are the items that have made sleeping on a hot night a “breeze”:

I always sort of thought linen bedding was just a wrinkly way for fancy people to show off just how fancy they are. But linen is actually one of the most breathable fabrics around. It’s designed to get softer with every wash without losing strength, so linen is great for hot summer nights.

While definitely pricier than my previous AmazonBasics microfiber sheets, there are plenty of high quality linen sheet and duvet covers that won’t completely drain your wallet, like this West Elm Belgian Flax Linen Starter Bedding Set, which comes with one duvet cover, two pillow shams, and a sheet set. While typically priced at $569 for a Queen-sized bed, West Elm often has sales of up to 40% off. I was able to get my lilac duvet cover and shams for $220.30 (usually $319) and the sheet set for $187.50 (usually $250), saving myself a total of $162. They’re incredibly luxurious and, more importantly, have helped me to get a more restful night’s sleep.

If you are looking to splurge (and want more vibrant pops of color), the Essential Positano Linen Bedding Set from Serena & Lily, $748, comes in bold, regal colors, with a duvet cover, a sheet set, and two shams.

Maybe it’s a no-brainer, but if your room is too hot to fall asleep and you either don’t have air conditioning or the money to leave your air conditioning on overnight, you should invest in a fan. While Money featured the Honeywell QuietSet Whole Room Tower Fan, the highest-rated quiet fan on Amazon in our Best Mattresses coverage, sometimes a large fan just isn’t the answer.

I personally love this Junior Vintage V-Fan, $69, from West Elm. The mid-century modern design and more compact size make it a sweet piece of decor, rather than a bulky fan taking up space in your room.

When I first heard about blackout curtains, I thought they were literally thick black curtains. Luckily, I was proven wrong. There are actually tons of attractive, neatly designed blackout curtains available online, like this set from HLC.ME available on Amazon. Their ability to keep light out of your room will not only block the heat out, but help you fall asleep better too.

Did you know that, besides just adding beauty and life to a room, plants can help control your home’s temperature? Some plants perspire similarly to the way humans do in order to cool down, and they bring the temperature down in the space around them as well. While not all plants can easily survive indoors, there are a few that can — and look great in your bedroom.

If you want to fill up some space, this Majesty Palm Plant is one of the most popular plants out there for keeping rooms cool, as it acts as a natural humidifier. But fair warning, it requires quite a bit of sunlight, so remember to crack open those blackout curtains during the day.

A smaller, low maintenance option is an aloe vera plant like this one available on Amazon. Its naturally occurring gel is well-known for its healing properties for sunburns, but aloe vera also emits oxygen which helps cool down surrounding areas. It’s a great option if you don’t have a ton of space and want to add a pop of green to your nightstand.

If you ever accused me of being a shill for Hydroflask, I would say that’s honestly a pretty fair assessment. Even before trying to actively reduce heat from my bedroom, my 21-ounce Hydroflask ($32.95 at Amazon) has lived on my bedside table every night since 2016. Why? Because as any obnoxious insulated water bottle owner will tell you: I can go to bed with cold water inside and wake up with it still perfectly refreshing.

Sometimes when you wake up drenched in sweat in the middle of the night, all you need is a few cold sips or dabs of water on your wrist to cool back down. Plus, the sleek design of the Hydroflask means it won’t look too out of place next to your new aloe vera plant and vintage-style fan.

Your mattress is the most essential part of your bedroom.
Come see what Nectar has to offer. Find your mattress and say hello to a new way of sleeping. Click below and take the jump.
Get a Good Night's Sleep

The Best Mattress for Your Money — and Every Kind of Sleeper