Meet the Wall St. Billionaire Who Bought the Most Expensive Home in Three Major U.S. Cities 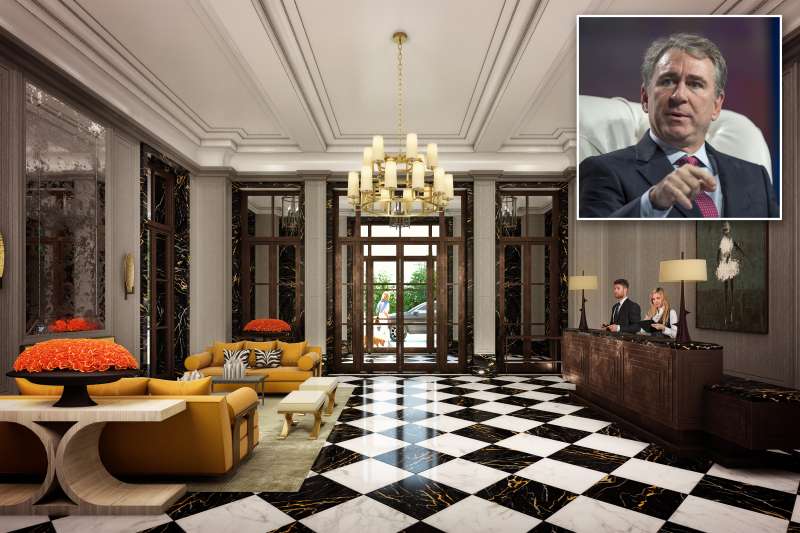 When it comes to picking out a house, many of us have trouble choosing. So, apparently, does billionaire investor Ken Griffin.

The founder of hedge fund Citadel LLC, Griffin purchased several floors of a Chicago condominium for $58.75 million in November. The sale may have set a new real estate record in the city. Here’s what’s even more remarkable: It’s nowhere near Griffin’s most exorbitant home purchase.

The hedge fund magnate, whose wealth Forbes pegs at $8.7 billion, has purchased seaside homes and luxury properties across the U.S., including deals touted as the biggest on record in two other major cities: New York and Miami.

Here are the most stunning buys in Griffin’s portfolio of notably extravagant properties:

Griffin’s record-breaking $58.75 million purchase at No. 9 Walton Street includes not one, not two but four floors at the top of the luxury Gold Coast condo building, The Chicago Tribune reported Wednesday. The sale gives Griffin more than 25,000 square feet of raw space across four the buildings 35th, 36th, 37th and 38 floors.

Yes, raw space. Crain’s says finishing the 35th, 36th, 37th and 38th floors could cost Ken Griffin an extra $25 million on top of the already astonishing purchase price, possibly raising the total cost to over $80 million. According to Crain’s, the penthouse space includes a private pool, while all of the floors feature high ceilings, panoramic views and outdoor space. The building itself includes a fitness center, private wine storage and dry cleaning service.

The condo at No. 9 Walton Street might be Ken Griffin’s most recent Chicago purchase, but it’s far from his only one. For all we know, the top four floors of the Gold Coast building are but a pied-à-terre for the richest man in Illinois, who currently owns three other homes in Chicago.

Griffin purchased a full-floor condo on the 37th floor of the Waldorf Astoria Chicago for $13.3 million in 2014, The Tribune reports, and also owns the two top floors in the Park Tower, the 12th largest building in the city. The Citadel founder bought Park Tower’s top unit for $6.9 million in 2000 and the unit below for $15 million in 2012. Add on the extra $11.75 million Griffin paid to ex-wife Anne Dias to buy her share of the Park Tower penthouse in 2015 and Griffin’s earlier Chicago expenditures ring in around $46.95 million.

The most expensive single residential real estate deal in Manhattan was no big deal for Ken Griffin, who The New York Times said agreed to pay $200 million for three floors at Manhattan’s 220 Central Park South, a towering skyscraper currently under construction on the southwest edge of Central Park, in 2015.

The Times reports Griffin doesn’t plan to live in the building himself, but considers the condos, which measure a total 18,000 square feet, an investment opportunity.

Ken Griffin’s plan to build a football field-length Tahiti-inspired beach house in one of Florida’s most expensive areas has been in the works since at least 2013, when the Citadel founder purchased four properties in Palm Beach for a combined $130 million. Located just a few minutes south of President Trump’s Mar-a-Lago, the four Blossom Estate properties Griffin acquired total nearly eight acres, according to The Wall Street Journal.

The hedge fund founder picked up a fifth Palm Beach property in 2015 for the price of $15.25 million. The home, The Palm Beach Daily News reports, will be used as a guest house.

Griffin’s vision for a beach house at the spot became public in 2016, when town officials approved plans for the home. The 33,500-square-foot glass and limestone structure will feature floor-to-ceiling windows and a landscape inspired by Tahiti, the Sun Sentinel reported.

The Citadel founder rounded out his Florida real estate portfolio with the $85 million purchase of a neighboring property in early 2017. A 4.18 acre parcel of land, Griffin’s latest Palm Beach acquisition comes with a 21,350-square-foot mansion valued at $6 million that will be demolished to make way for the founder’s beach home. The Palm Beach purchase was the second most expensive real estate deal ever recorded in the Florida town, according to the Palm Beach Daily News, following the price of a home sold in 2008 by President Trump. Not to be upstaged, Griffin received the highest property tax bill in town for five years in a row, according to The Palm Beach Daily News.

In total, Griffin’s Palm Beach land alone has cost him about $230 million.

Ken Griffin first put down roots at the Four Seasons’ exclusive Hualalai community in 2009, when the billionaire bought four acres of land for $11.38 million, the Wall Street Journal reports. I know what you’re thinking: Why is Ken Griffin, a demonstrated collector of the highest-end real estate he can find, slumming it with such a comparatively affordable property purchase?

Maybe Griffin wondered the same thing, or maybe the Balinese-style seaside home a mere 318 feet away just had a better view of the ocean. Whatever the reason, Griffin bought a second Hawaii property in the exclusive community for $17 million just three years later. The 5,600-square-foot second home comes with stunning views of the Pacific Ocean from both inside the house and its seaside infinity pool, according to Business Insider.

When the top two floors of Miami’s Faena House sold for $60 million in 2015, the sale set a new record, even as its buyer was steeped in mystery. A representative for the anonymous buyer, who purchased the home for $10 million more than its original asking price, would only tell The Wall Street Journal the client “liked the privacy afforded by the fact that the building is relatively small.”

If you’ve read this far, it should come as no surprise that Ken Griffin was eventually unmasked as the Miami home’s elusive owner — at least for awhile. Griffin placed the two condos back on the market in January 2016 for a combined $73 million.

According to The Wall Street Journal, the top-floor penthouse measures approximately 8,270 square feet and includes five bedrooms, a 7,300-square-foot wraparound terrace and a rooftop deck with built-in pool, while the second unit, one half of the 15th floor, measures about 4,240 square feet.

Ken Griffin’s remarkable spending isn’t restricted to real estate. The hedge fund founder gave a record-breaking $150 million to Harvard in 2014 and spent a combined $500 million on two works of contemporary art in 2016. The billionaire who once told The Chicago Tribune the ultra-rich “have an insufficient influence” on politics has set partisan records as well: Griffin gave a record $20 million to Illinois Governor Bruce Rauner in 2017 and gifted $324,000 to the Republican National Committee in 2015, setting a new record in the process.