Yes, the World is on Fire. Here's Why I Started Saving for Retirement Anyway 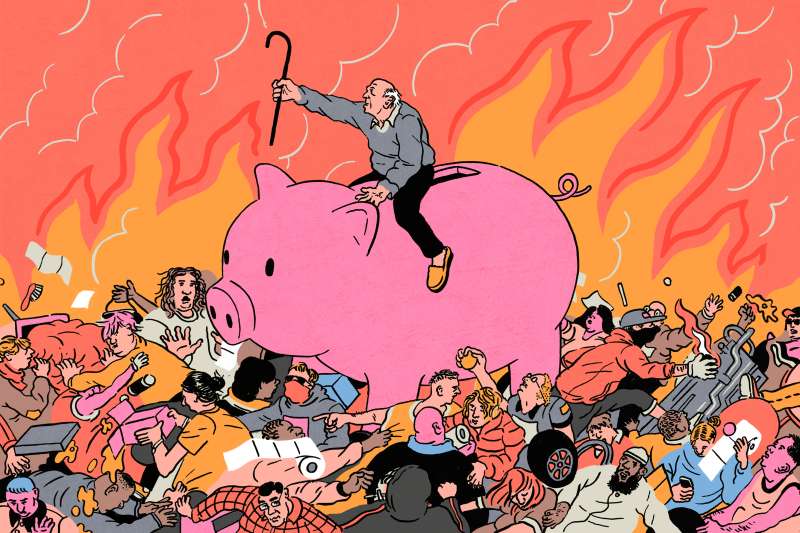 Up until a year ago, I was a freshly-graduated college student with a million things on my mind. None of which included what it might be like to retire someday.

On the contrary, I was desperately trying to find a job that could help make a dent in my burgeoning college debt while simultaneously consuming hundreds of hours of doom-and-gloom climate change news. Like, leave me alone, mom! The weight of a world that needs to be saved is on my generation’s shoulders — can we save the 401-nonsense for later?!

I’m not the only one. Even before the coronavirus outbreak, young people have been keenly aware of how recent economic crises will impact our futures, and how we may never be able to “retire” in the traditional sense because of them. On top of that, a recent Money and Synchrony Bank survey found that 39% of retirees are still saving for retirement, in retirement. Add in reports that we’re about to experience the worst recession of our lifetimes—with job prospects at an all-time low thanks to the pandemic—and the idea of sitting on a pile of money we can’t touch until we’re old seems laughable.

In good times and bad times, everyone is united in one economic goal: saving money.
Further expand your financial knowledge on how to save efficiently with key findings from Synchrony's Money and Savings Guide, free to download below.
View Interactive Report

“It’s difficult for a lot of people to feel empowered to save when the future is more undefined than ever,” says Douglas Boneparth, a financial advisor and president of Bone Fide Wealth.

But that’s a dangerous—and wildly misinformed—mindset. “People conflate difficulty with inability and we have to change that,” Boneparth says.

No matter how nihilistic your outlook, the reality is, the world probably won’t “end” any time soon. And as deeply uncool as this sounds, if you want the future you to stand any chance of enjoying a high-quality of life, you need to start mapping out your finances now — and that includes building up your retirement funds.

That isn’t to say that a lot of millennial and Gen Z “doomerisms” are unfounded. In all likelihood, my age group will be working a lot longer than our parents, and in more excruciating conditions. But as with every crisis we’ve experienced thus far — coronavirus being the most recent addition — people who are financially prepared almost always fare better.

“There’s a lot to be concerned about right now,” says Tanja Hester, author and co-host of The Fairer Cents podcast, “But a lot of people are working from home right now and spending less. They have more room in their budget to contribute more to a retirement account and create more security for themselves.”

We can look at the spending habits of current retirees as an example of what the future of retirement might look like: working part-time beyond the typical age of retirement, finding unique ways to lower overhead costs, or — if you’re lucky — turning a passion project into a business in order to keep up with the cost of living. But federal retirement staples like Social Security? Don’t put all your money on it.

Interested in further educating yourself financially?
Download Synchrony's Money and Savings Guide for free to learn key discoveries on money, savings and financial happiness.
Get Started

“We know that programs like Social Security won’t be enough for younger generations because people are already spending almost half of their Social Security benefits on health care,” says Hester.

Other factors, like the cost of home insurance if you live in a coastal area (or any place that stands to be majorly affected by a warming planet) make it clear that many millennial retirees will need a hefty stockpile to stay afloat. And that it’s never too soon to get started.

As a refresher: The most common retirement fund is a traditional, employer-sponsored 401(k), which is funded with pretax dollars, and Roth 401(k)s, which are funded with after-tax dollars, Both accounts let you automatically contribute a percentage of your paycheck towards retirement each month and earn a company match from your employer (as of last year, the average employer match in the U.S. was 4.7%).

For the self-employed, contract workers, and anyone who wants a retirement fund but doesn’t have a traditional employer, there are two main options: a traditional Individual Retirement Account (aka an IRA) or a Roth IRA. With a traditional IRA, the money you contribute remains untaxed until you begin pulling it out, no later than age 72. The money in a Roth IRA, like a Roth 401(K), is taxed now, making it the better option for people who think they’ll be in a higher income tax bracket when they retire than they’re currently in.

If saving for retirement feels like a lot of hassle and jargon for very little reward, that’s because it is — if you don’t have specific goals in mind.

Young people might not retire in the traditional way that our grandparents did, but we still need to envision the type of life we want to live in old age — and act to create it.

“The future is impossible to predict,” says Lauren Wybar, a senior financial advisor at Vanguard. “I always advise my clients to focus on what they can control, especially their spending and saving.”

Looking to maximize your savings and optimize your budget?
Synchrony's Money and Savings Guide can help steer your budget to hit, and even exceed, your financial goals. Download for free by clicking below.
Get Started

This Is What Millennials Can Actually Expect From Retirement, According to Experts

Boomers Are Postponing Their Retirements Due to Coronavirus. Here’s Why That’s a Good Idea

Before You Take an Early Retirement Buyout, Complete This 6-Step Checklist