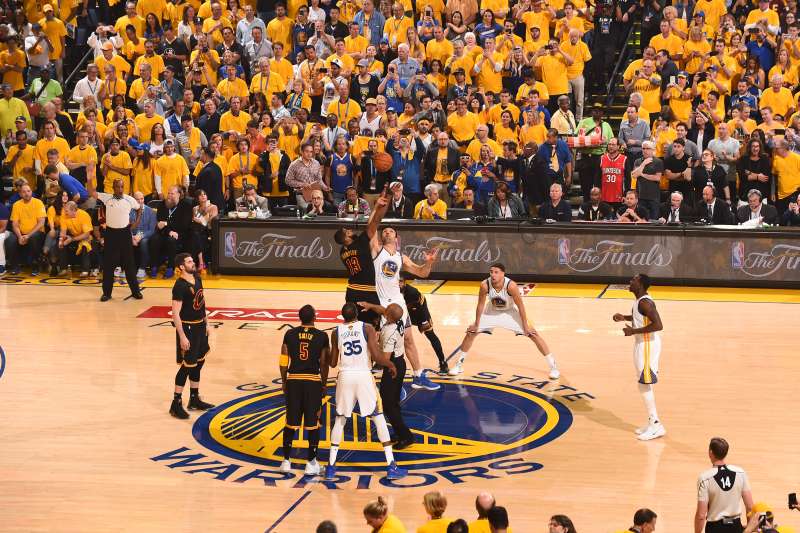 The 2018 NBA Finals, featuring the Golden State Warriors vs. the Cleveland Cavaliers, is being broadcast tonight on ABC starting at 9 p.m. ET.
Noah Graham—NBAE/Getty Images

The 2018 NBA Finals tip off Thursday night, with the Golden State Warriors facing the Cleveland Cavaliers in the championship for the fourth year in a row.

It’s the first time ever in NBA Finals history that two teams square off for the league championship in four consecutive years. For that matter, the 2018 NBA Finals marks the first time in any major sport that the same two teams are facing each other for the championship title four times in a row. (In the NHL, the Detroit Red Wings played the Montreal Canadiens in the Stanley Cup Finals three years in a row, and in Major League Baseball the New York Yankees and New York Giants met up in the World Series in three consecutive seasons.)

As for 2018 NBA Finals predictions, Stephen Curry, Kevin Durant, and the rest of the Golden State Warriors are strong favorites to beat LeBron James and the Cleveland Cavaliers. As many observers have noted, this year probably represents LeBron James’s toughest test yet, seeing as he must face the heavily favored Warriors without All-Star guard Kyrie Irving (who was traded to the Boston Celtics) and without a fully healthy Kevin Love (who was injured in the previous series and may miss at least Game 1 of the NBA Finals).

Here’s everything you need to know about watching Game 1 of the 2018 NBA Finals, including what time the game starts, what channel it’s on and how to live stream it — no matter if you’re watching on TV or want to live stream the Cavaliers-Warriors.

The 2018 NBA Finals are being broadcast on ABC. If you have a TV and access to free, over-the-air channels, all you have to do is find your local ABC channel and tune in. If you don’t have a cable TV package with networks like ABC, you most likely can still watch the NBA Finals for free with a digital antenna designed to get reception of free broadcast channels.

The ABC broadcast of Game 1 of the NBA Finals will start at 9 p.m. E.T., on Thursday, May 31. The NBA Finals Game 2—which like the rest of the series is also on ABC—is set to air at 8 p.m. E.T. on Sunday, June 3. Game 1 and Game 2 are both being played at Golden State’s home venue, Oracle Arena in Oakland, California. Here’s the full 2018 NBA Finals schedule.

How to live stream the 2018 NBA Finals

If you prefer to live stream the 2018 NBA Finals online for free on a laptop, smartphone, or other device, you can watch the games via the ABC app. Bear in mind, however, that ABC will require you to log in online with a participating pay TV provider account.

If you don’t have such an account, you can still stream the 2018 NBA Finals by using a live-streaming TV service such as Hulu Live, DirecTV Now, Playstation Vue, Sling TV, or YouTube TV. All of these services have free trial periods of around one week for new subscribers, and in many markets the packages include free broadcast channels like ABC.

Live-streaming TV packages generally range from $20 to $40 per month, after the free trial period is over. Remember to cancel the service if you don’t want to pay after the trial period ends.