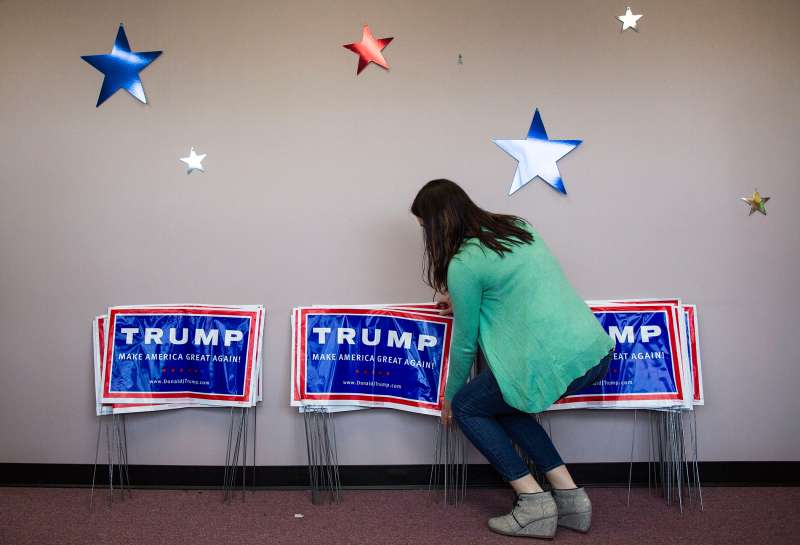 A campaign worker organizes campaign signs to be given out at the opening of the Donald Trump for President Raleigh campaign headquarters, in Raleigh, N.C., March 5, 2016.
Al Drago—AP

The presidential campaigns filed their latest financial disclosures this week, showing Hillary Clinton is beating Donald Trump handily in the money race. Trump spent some of the week trying to show he can catch up, with his first public pleas for funds.

We’ve combed through the campaign expenditures. That’s one of the best ways of understanding how a modern campaign works. That might be especially true of the Trump disclosures, which turn up interesting news–such as the cost of hats and Facebook ads–that might not show up in bigger campaigns that outsource some functions to specialists. And the disclosures keep turning up surprises, like the cost of hotels (higher than you’d think for Trump’s lean campaign) and wine.

• The Trump campaign is just as hands on with social media as you’d imagine. The May report shows $79,717.60 in spending on Facebook ads during the month. That seems to be done in-house. The Clinton campaign has no similar line on its report. It’s likely that the campaign has spent money to boost Facebook posts, but that’s probably done through outside ad experts. (The Clinton campaign did not respond to an email asking for clarification).

• Those emblematic Trump hats cost real money. Trump reports spending $207,868.13 on hats in May (yes, they are indeed made in America). That’s only a part of what Trump has spent on various sale items and giveaways. There’s another $694,000 on mugs, t-shirts and the like. Overall, that’s more than $900,000, or 13 percent of Trump’s May spending — surely the highest share of any presidential campaign spent on this kind of stuff. That said, selling hats has never been a key presidential fundraising tool before Trump.

• Every kind of fundraising, with or without hats, is expensive. The Center for Responsive Politics (CRP) calculated that in the 2012 election cycle the Barack Obama and Mitt Romney campaigns spent $1.3 billion between them. Of this, $179 million, or 12.8 percent went to fundraising. If the Trump hats were his campaign’s only fundraising expense, they’d be par for the course.

• Advertising is far and away the biggest campaign cost. According to the CRP’s OpenSecrets.org, of the 2012 Romney and Obama spending, $763 million went to ads. The bulk of that went to television, though at least $94 million went to web ads.

• On broadcast spending, it makes sense for candidates not to rely on parties and political action committees. Super-PACs, which spend money to elect a candidate but are not technically part of the campaign have many fewer restrictions on raising funds. But candidates are entitled by law to the lowest broadcast advertising rates. This makes a big difference in tight media markets. In the Iowa and New Hampshire primaries, Super-PACs had to spend much more to buy the same ads.

• There are some strange, and potentially unnerving recipients of campaign cash. On the Trump side, the May finance report shows $35,000 in expenditure for web advertising to a firm called “Draper Sterling” the name of two of the principals in the Mad Men television series. According to reports in Gawker and Think Progress, it’s hard to determine just what this firm actually does. Meanwhile, on the Clinton side, there are payments of $73,452 to Clinton Executive Services Corporation. That’s a company set up, apparently, to manage technology for the Clintons. If the name sounds a bit familiar, it’s because the same company also paid the bills for Hillary Clinton’s infamous private mail server.

• It’s not clear that Trump’s lean operation really is more efficient. Take hotels. In May, the Clinton campaign, with a paid staff of reportedly around 700, spent $283,000 on what we could identify as hotels (that includes all the bookings on Expedia.com. The Trump campaign, meanwhile, spent about $252,000, not much less — and surprising considering his campaign staff is only a tenth the size of Clinton’s.

• How money gets spent is a source of tension between campaigns and the national parties. Insiders who are used to navigating the party system take in a lot of money from campaigns. Often the parties want candidates to work with experts and vendors they know, and effectively make it a condition for Congressional candidates to get party funds.

• The ultimate insider is the candidate with the outsider campaign: Trump. As many outlets have reported, 20 percent of Trump’s spending went to his own properties. That includes a whopping $423,371.70 to rent Mar-a-Lago, Trump’s Florida resort, and about $13,000 to his son’s winery. Trump has paid most of these bills out of his own pocket. But so far he’s called that a loan. Donors will be looking at whether Trump ultimately foots the bill, because even active supporters aren’t eager to help Trump turn a profit on his campaign.

Read More: Most Stock Investors Think Trump Will Be Better for Their Portfolio. Here’s Why They’re Wrong.