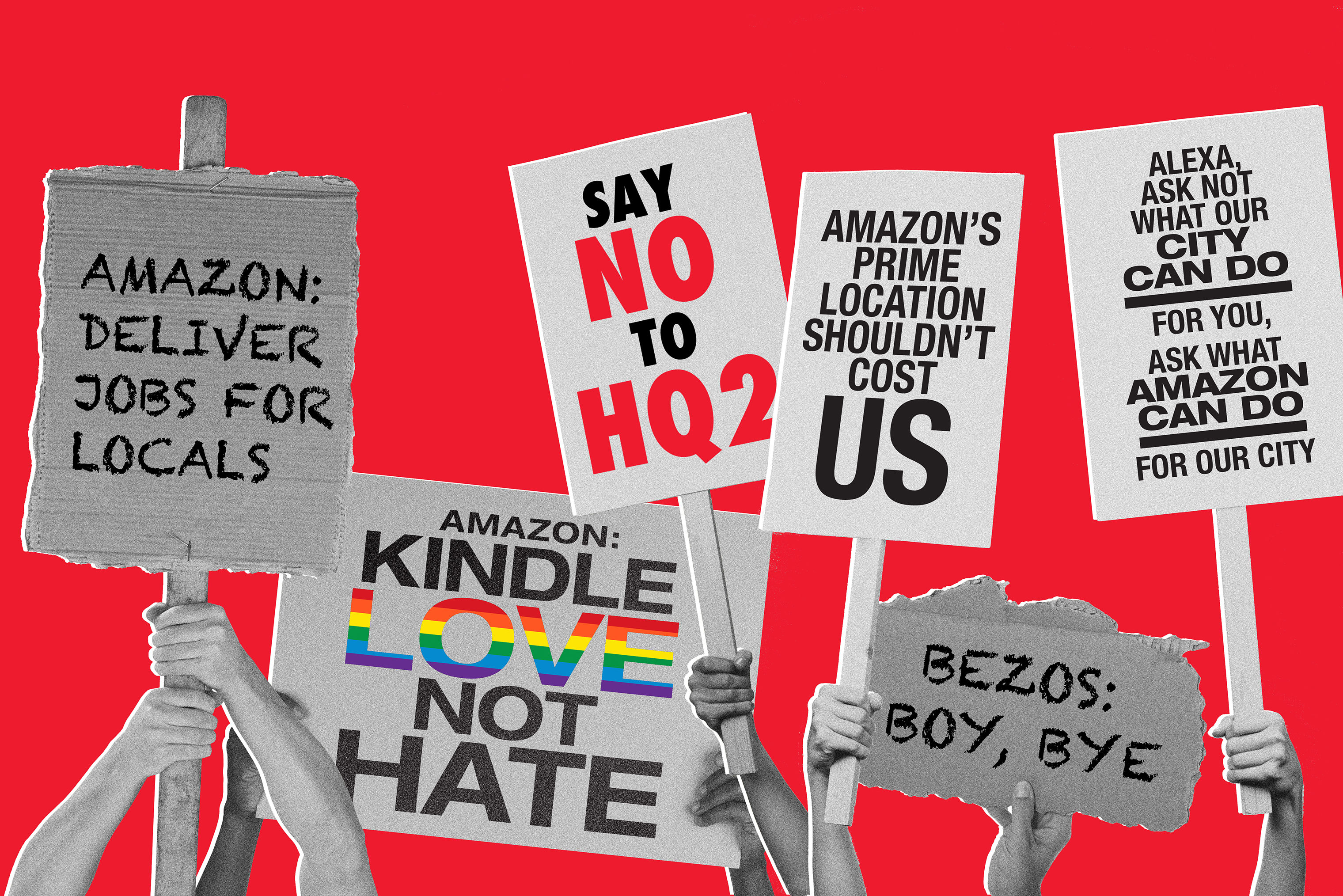 The HQ2 resistance is real.
By Julia Glum

On its face, Amazon's pitch for its second headquarters may seem pretty tempting: The chosen city will get a $5 billion facility, 50,000 high-paying jobs and the influence that comes with landing the second-largest company in the United States.

But not everyone thinks that's a prime deal.

Resistance to HQ2 — and, by extension, Amazon — has been quietly spreading across the country ever since the tech giant announced the top 20 candidates for its second home in January. The levels of (un)enthusiasm vary: Over half of Atlantans like the idea of hosting HQ2, but just one out of every three people in Austin and Denver strongly support it, according to a recent Elon University poll. But in many places, there are organizers staging protests, holding town halls and creating sleek websites to oppose Amazon's selection process and alert people to the consequences HQ2 could have on their local communities.

So what's the problem? Here are five reasons Amazon protesters say they're telling Jeff Bezos to keep out.

The process is too sketchy.

When Amazon announced its plans to open a second corporate headquarters last September, it immediately kicked off a highly competitive bidding war among interested cities. Nearly 240 regions and cities submitted proposals for HQ2, and the field was packed with gimmicks. Just a few examples: Tucson, Arizona, shipped a 20-foot-tall cactus to Amazon's offices; Birmingham, Alabama, installed giant replicas of Amazon boxes on its sidewalks; and Stonewall, Georgia, voted to rename itself "Amazon" if it wins.

But other details of the bids are still secret. Amazon required its 20 finalists to sign nondisclosure agreements limiting what city officials can say about the incentives they offered the company in pursuit of HQ2. As a result, "the public knows almost nothing about six of the 20 HQ2 bids, and only two city bids and two state bids have been fully disclosed," according to a recent report by policy resource center Good Jobs First.

The center's executive director Greg LeRoy tells Money he's not OK with that lack of transparency. People in Pittsburgh, Chicago and Newark, New Jersey, have resorted to filing lawsuits in order to see the full proposals.

"Amazon wanted all the leverage provided by starting out as a public auction but then [went] into the back room where they can control everything again," LeRoy says. "What's wrong with this picture here?"

The contest is a rat race.

The HQ2 fervor has inspired what Indianapolis city council member Jared Evans calls a "race to the bottom" — essentially, a bidding war where cities are competing to offer the biggest discount.

"There are so many people ready to bend over backwards and do whatever they have to do to land this type of company," he tells Money.

In lieu of having the actual documents, protesters are building their cases on crumbs of information they've been able to scrounge up about various proposals. Newark, New Jersey, is offering Amazon $7 billion in state and city tax credits. Grand Rapids, Michigan — which did not make the top 20 list — vowed to give Amazon up to $2 billion in tax incentives, according to Crain's.

Evans says those big numbers trouble him. Ditto the fact that, even as an elected official, he's not currently permitted to know what's in the package Indianapolis offered to Amazon.

"Originally, I was excited about the thought of trying to get Amazon and the fact that Indianapolis had even made the cut," he says. "[Then] some of the proposals began to come out ... I hope to God we're not considering giving a billion or a billion and a half dollars to this corporation."

Jobs probably won't go to locals (and even if they do, they won't be good ones).

In other words, people will have to deal with the repercussions of the company's move into their city, but they won't get any of the benefits.

Devan Spear, the executive director of Philadelphia Jobs With Justice, says she's similarly wary of the kinds of opportunities Amazon would offer in her state, given the company's history of exploiting employees. Amazon warehouse workers have said they avoid bathroom breaks because they're terrified of missing their quotas, have developed depression on the job and earn less than minimum wage.

"We want to see good union jobs, we want to see living-wage jobs, and we're a little wary about the types of jobs that Amazon offers," Spear says.

Amazon's business practices are also causing concern for LGBT advocates. The recently launched "No Gay? No Way!" campaign asks the company not to build HQ2 in any of the nine finalist areas without anti-discrimination laws, among them Miami, Raleigh and Nashville.

It could seriously impact infrastructure and housing.

According to Margaret McLaughlin, the chair of Metro D.C. Democratic Socialists of America, people in her area are already feeling pushed out by gentrification. Amazon's presence would only make drive housing prices up further.

"We have hundreds of people in D.C. that sleep in the streets every single night, and people die every single winter of exposure," she says. "And Mayor Bowser is still trying to give an incentive package in the hundreds of millions to Amazon."

McLaughlin says there needs to be a discussion about how to bring Amazon in while also helping the homeless population, which has grown 9 percent since 2012, and funding the school system, where just 42 percent of high schoolers are on track to graduate.

HQ2 is seeing similar pushback in Pittsburgh, where University of Pittsburgh sociology professor Jackie Smith helped plan a February forum to address the city's candidacy. Smith says she's especially concerned about the potential pressure on the transit system, which is already considering reducing service to outlying areas dominated by poor and minority residents. The median income of black households in Pittsburgh is nearly $31,000 less than those of white households.

"We know if Amazon comes here, these racial inequalities are going to get even worse — and they're already at the bottom," she adds.

Residents are challenging Mayor Bowser to fund communities, housing, schools and transit, not give away our money to the worlds richest man and Amazon, Watkins Field Recreation Center, Washington, D.C., February 22, 2018.
courtesy of Zach Weinstein

Nobody is paying attention.

Smith says that she's continually surprised by "how little people have really thought about this." She wants community members to stop allowing themselves to be distracted by silly stories about flashy proposals and start asking Amazon the tough questions.

All of the activists Money talked to are working to inform people about how Amazon's presence would impact the various communities. Last week, protesters in places like New York City and Philadelphia put on rallies as part of a national #NoAmazonWithoutUs campaign. They raised a litany of issues and referred Bezos to an October 2017 wishlist they put together demanding Amazon provide good jobs, pay taxes, prevent displacement and be accountable.

Their goal is to encourage constituents to be curious about the proposals and their potential consequences. Spear, for example, says she knows they can't stop the HQ2 project completely — and they're not trying to.

"We're not necessarily saying, 'Amazon, stay out' because we know HQ2 is going to go somewhere," she says. "But we do want to imagine a world where cities can ask what Amazon can do for them instead of the other way around."