The Big Risk of Donald Trump's Fight With Apple 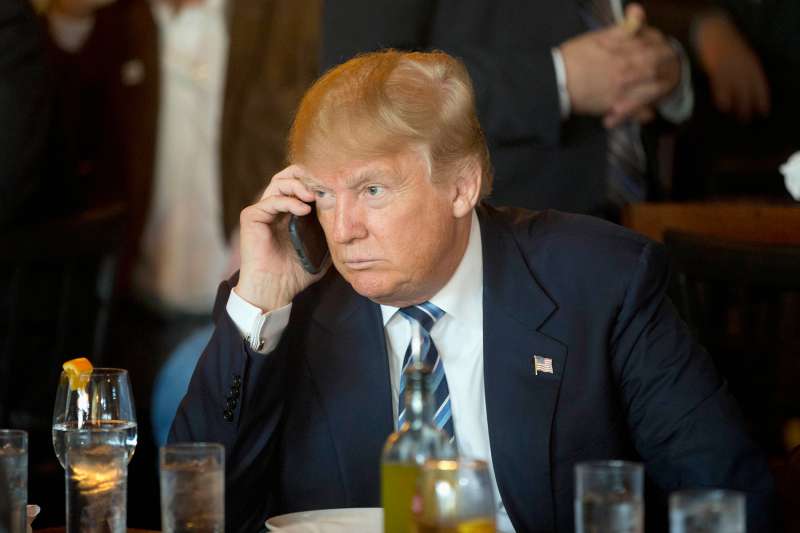 “I would come down so hard on him — you have no idea — his head would be spinning all of the way back to Silicon Valley.” —Donald Trump, about Apple CEO Tim Cook

It seems that the more enemies Donald Trump makes, the more votes he gets, and as he races through the primary calendar Trump stepped up his campaign against one of his bigger targets: Apple. Trump’s calling for a boycott of Apple (and apparently a head-spinning knockout punch at the CEO) until Apple agrees to unlock the San Bernardino shooter’s phone.

Really, the Trump-Apple fight started before the San Bernardino shooting. It’s not just failing to unlock the phones that Trump thinks is un-American. It’s much of Apple’s way of doing business. A month ago, Trump promised that when he’s president, he’ll “get Apple to start building their damn computers and things in this country, instead of in other countries.” The message here is that Apple sells stuff here while making it abroad, and we shouldn’t stand for that.

That’s an argument brought out, in various forms, whenever politicians talk about how to create jobs. Unfortunately, the Donald approach fails in two ways: First, a trade war would hurt American companies (including Apple) and their investors more than anyone else. And second, forcing Apple to make phones in the U.S. would likely do a lot less to create jobs than you might guess.

Let’s take trade. Apple does manufacture its products abroad. Cost is one reason for this. But so is expertise, as Cook has often pointed out. Once merely an inexpensive place to make things, China now has developed an expertise in manufacturing that’s unmatched anywhere else.

As China’s own industry has grown, something else has happened: China has become a very, very big market for U.S. companies. Apple’s sales in China last year totaled $58 billion. Overall, 60% of Apple’s $234 billion in sales came from outside the Americas. (You can see a breakdown, taken from Apple’s annual report, at the end of this post.) Apple doesn’t break out more detailed numbers for each country, but Apple probably sold more iPhones in China last year than in the United States.

So if you talk about building the damn computers in this country, it’s worth wondering if other countries will take a similar approach. Actually, stop wondering: They will. China has its own rising mobile phone makers — hello, Xiaomi — who will be happy to take over Apple’s production lines, and a government that (yes, like Trump) favors local manufacturers.

Now let’s say the U.S. is willing to forgo a large share of its foreign sales in favor of a “sell it here, build it here” philosophy. How many jobs does that create? One way of thinking about that is to compare it with the experience of Motorola, the phone manufacturer briefly owned by Google. With much fanfare, Motorola opened a Texas plant that reportedly employed about 2,000 workers and could manufacture 100,000 phones a week, or about 5 million a year.

Last year, Apple sold 231 million iPhones. It doesn’t break out how many of them were sold in the U.S., but we know that 40 percent of Apple’s revenue comes from the Americas — that includes Canada, Mexico, and all of South America, not just the United States. Let’s use the same number as a guesstimate for its phone sales; this would mean Apple sold about 92 million phones in the Western hemisphere. If Apple’s plants need the same number of workers as Google’s to produce the phones, we are talking about 35,000 or so jobs.

For comparison, Apple now has about 76,000 U.S. employees. Some of those are in retail stores, but many are in highly paid programming and research and developments jobs. Adding some factories would add a few of those (setting up factories takes specialized skills), but most of the assembly line jobs would not be very highly skilled or paid. Economically, it’s just a drop in the bucket, a much smaller factor than the tens of billions of dollars in sales Apple would give up in a “sell it here, build it here” world.

If you cut through the rhetoric, the real issue economic issue here is that even if Apple did make its phones in the U.S., it wouldn’t come close to creating as many jobs as the industrial powerhouses of previous decades. Those, by the way, don’t create as many jobs as they used to: General Motors had more than 700,000 workers two decades ago; now it’s at less than a third of that.

Technology companies do create good jobs, just not enough of them. This is a genuine 21st century problem, for which no one—least of all Trump— has offered a fix. Demands that Apple move a few factories from Shenzhen to Arkansas only underline how far away we are from solving it.