This Is the Best 'Fast Casual' Chain in the U.S.—Beating Chipotle, Panera, and Shake Shack 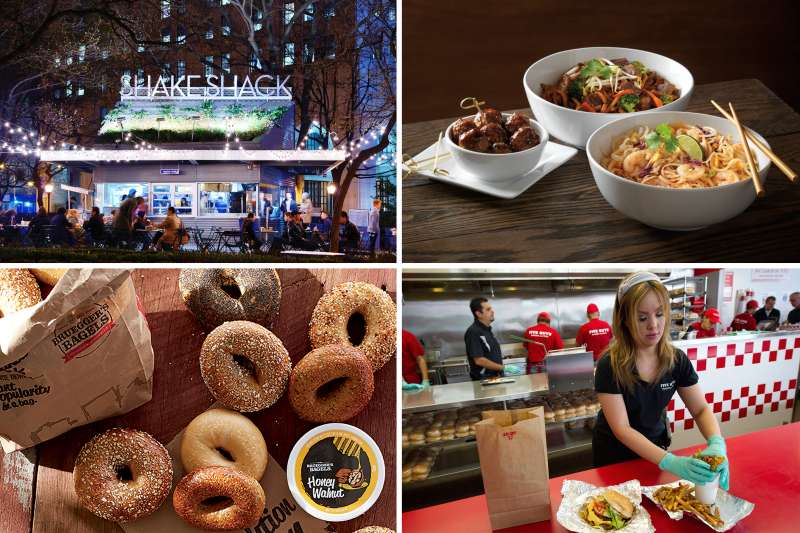 If you’re heading to Panera or Quiznos on your lunch break, you’re missing out. There’s a better sandwich shop that offers the most for your money, according to a new Money analysis.

In recent years, joints like Panera and Chipotle (typically referred to as “fast casual” restaurants) have raised the bar on the typical fast-food fare. But you generally end up paying a bit more at these types of restaurants than, say, McDonald’s. So which of these chains deserves your hard-earned cash? Money set out to find out.

To start, Money identified the pool of contenders: chains with over 150 locations nationwide that generally serve made-to-order dishes of higher-quality food than that typically found at fast food chains (and supposedly with fewer frozen or processed ingredients). Then Money staffers weighed in, rating their recent dining experiences. We ranked all of the chains by factoring in both the average cost of an entree and the level of customer experience.

The results: These are the top 15 “fast casual” chains for your money. As always, I’m happy to take on the haters. Tweet me directly at @megan_leonhardt.

Jimmy John’s got its start in the 1980s with a tiny location that delivered sandwiches to students living in the Eastern Illinois University dorms. Over 30 years later, you can still find many of its locations near college campuses, serving up gourmet cold subs at low costs to hungry students. Plus, the chain sells its day-old loaves for a mere 50 cents (perfect for the broke college student).

Named for its five founders, all members of the Murrell family, Five Guys has grown from a single location in Alexandria, Va., to nearly 1,500 locations worldwide. The chain is known for its made-to-order fresh beef burgers and its addicting hand-cut fries. (Five Guys only uses peanut oil, which they say makes their fries tastier.)

A relative newcomer to the scene, Shake Shack started out as a stand in Manhattan’s Madison Square Park in 2004. The chain’s signature burgers, crinkle fries and thick milkshakes proved a hit, with lines quickly wrapping around the park during all hours of the day. Money staffers were fans too: Shake Shack earned their highest average rating.

Customers wait in line to make a purchase at the drive-thru of a Starbucks Corp. coffee shop in Pinole, California, on April 23, 2018.
David Paul Morris—Bloomberg via Getty Images

As the joke goes, there’s a Starbucks on every corner. But there’s a reason that this ubiquitous chain works so broadly—it’s relatively inexpensive and better than average. Starbucks is currently expanding its lunch offerings with new salads and sandwiches (already available at select locations in Chicago, San Francisco and Seattle).

More than just a bagel joint, Bruegger’s serves up soups, salads, and cleverly named sandwiches like the Leonardo da Veggie and Herby Turkey. The chain has locations all along the East Coast, as well as spots out west in Arizona, California and Texas.

Plates of food on the counter inside Panera Bread.
Jeff Greenberg—UIG via Getty Images

Known for its “You Pick Two” deal, which offers diners any two smaller servings of a sandwich, soup, or salad, Panera scored above average with Money staffers. As befits its name, Panera offers bakery items (such as freshly baked artisan breads, cookies and bagels) along with its cafe menu.

Einstein Bros., which operates in 44 states, has won fans with quirky bagel flavors like Cheesy Hash Brown, Green Chile and Spinach Florentine. Diners can use those same bagels as the base for the chain’s dozen hot and cold sandwich options, plus its pizza bagels.

Founded in Chicago, Potbelly specializes in hot sandwiches, as well as soup, salads, shakes, smoothies—along with soft, chewy cookie flavors like oatmeal chocolate chip, chocolate brownie and lemon cheesecake. True to its name, each one of its over 400 locations has an actual antique potbelly stove on the premises.

Tied with Noodles & Company (below), McAlister’s high satisfaction from Money staffers helped make up for its higher cost. The chain started in a renovated gas station in Oxford, Miss., and some of its design elements, such as the black-and-white tile floors, reappear in many of its locations. In addition to its sandwiches, the chain serves up “Texas-size” baked potatoes and its famous sweet tea (which diners can buy by the gallon).

Playing off its name, this chain serves up practically any noodle dish you can think of—from buffalo chicken mac ‘n’ cheese to Thai green curry with shrimp. Headquartered in Colorado, Noodles & Company has over 500 locations across the U.S.

Chipotle’s above-average cost hurt the chain’s overall value score, and the chain’s issues with food safety may have hurt its Money staff score, but you certainly do get a filling meal for your money at this chain. Known for its burritos and burrito bowls, Chipotle uses responsibly raised meat and organic tofu.

Burger lovers from far and wide descend on the new Smashburger restaurant in New York.
Alamy

The chain says its burgers are “made-to-order, never frozen, smashed and seared to perfection”—with the high heat locking in the fat and juices for flavor. Along with its signature offerings, Smashburger also offers create-your-own and local speciality burgers. For dessert, the chain has shakes and malts made with Häagen-Dazs ice cream.

This Tex-Mex chain offers a wide range of expected menu items—from nachos to tacos and burritos. There are also Moe’s signature “stacks,” which sandwich your choice of protein with beans, cheese and veggies between two tortilla shells—and then wrap it all up in a large flour tortilla for grilling.

The “home of the toasted sandwich,” Quiznos fared poorly in Money’s ranking because of below-average staff satisfaction scores. The chain, which has around 1,500 stores all over the U.S., offers over a dozen different types of sandwich options that can be customized hundreds of ways.

Started in Boston, Au Bon Pain (which means “from good bread”) offers both cafe items and baked goods. The chain operates in almost 30 states, with a heavy presence on the East Coast.

Money evaluated over 30 of the biggest fast-casual dining chains in the U.S., sticking to brands that had at least 150 locations nationwide. Using sample menus on Menu-Price.net, Money calculated the average cost of an entree. Finally, staffers rated each restaurant based upon their recent overall dining experience. Nine restaurants did not receive enough ratings to be considered.