How to Strike a Balance With Bonds 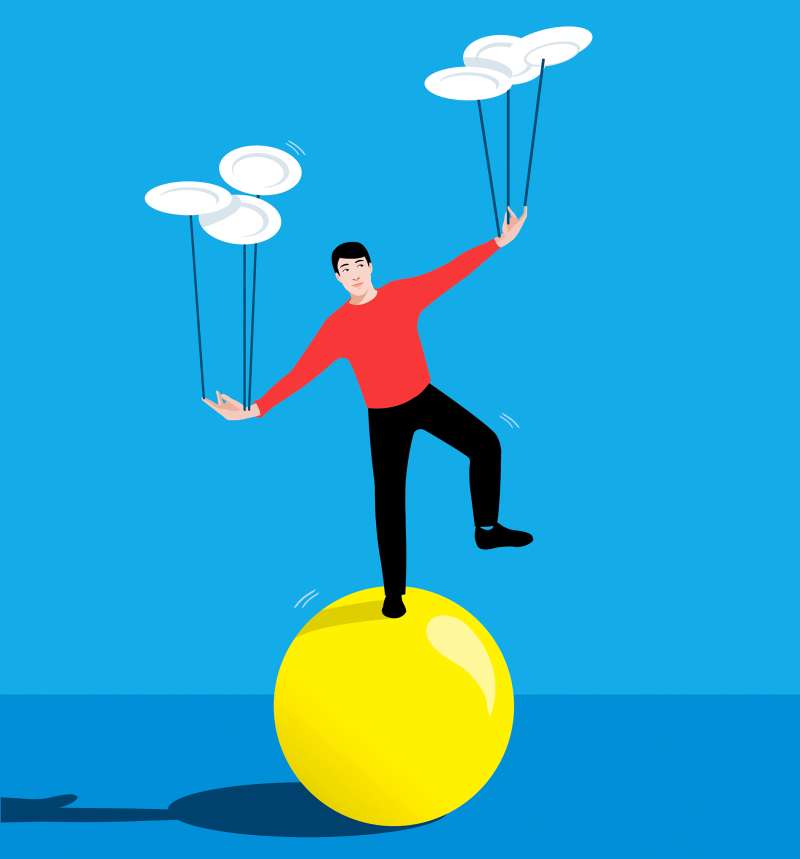 In recent years, the main challenge for bond investors seemed clear: How can you squeeze out a tad more income from a market plagued by historically meager yields?

Last year, though, showed that there’s another, equally important objective to owning bonds that you can’t lose sight of. That’s the stability that bonds are supposed to offer. “You keep bonds not just for the returns, but for the risk mitigation they provide your portfolio,” says Roger Aliaga-Diaz, senior economist for the Vanguard Group.

That lesson was driven home in 2015, when high-yield, long-term, multisector, foreign, and nontraditional fixed-income funds — which investors have used to “reach” for incrementally higher payouts — all sank in value. Some emerging-market bond funds, in fact, fell by double digits in 2015.

There could be more choppiness ahead if the Federal Reserve continues to raise interest rates this year. Bond prices fall when rates rise, and the Fed has stated that it intends to “normalize”—read “raise”—short-term rates, barring an unexpected meltdown in the economy.

To be sure, few expect a big spike in rates. In fact, conventional wisdom says the Fed will hold rates where they are when policymakers meet today. And investors now expect only one or two rate hikes in 2016, not the four rate hikes that were previously assumed.

In the meantime, market forces should keep somewhat of a lid on long-term interest rates. German 10-year bonds are yielding just 0.44%, and Japan’s bonds are paying 0.21%, so demand for 1.9% U.S. Treasuries from international investors should remain strong.

Nevertheless, rates may rise and interest rate hikes have a tendency to unnerve markets. So it’s time to gird your portfolio.

This doesn’t mean doing anything drastic. Just stop fixating on yields and focus on the total picture. Here are the key steps to follow:

It’s unlikely that you’ll be bragging about the great performance of your bond portfolio this year, as expectations for the bond market are lower than an ant’s ankles.

“In the past 30 years, bonds have averaged about a 7% total return,” says Aliaga-Diaz. Over the next several years, “we’re thinking 2% to 3%, barely beating inflation.” Indeed, a surprisingly accurate gauge for forecasting annualized fixed-income total returns over the subsequent decade is to see what 10-year Treasury securities are yielding today. And right now, they’re paying just under 2%.

Stay calm. Since July, fund investors have yanked more than $81 billion out of their fixed-income portfolios as rate-hike fears have heated up. But even if the Fed lifts rates this year, pundits aren’t predicting massive losses, but rather modest gains for fixed income. And as meager as the expectations are for bonds, the outlook for cash — money-market securities and bank CDs and the like — is worse.

Another reason to stay invested: Bonds can be potent tonic for when the equity markets get choppy, like they have this year.

Also, even if fixed income takes a turn for the worse, bond bear markets are rarely as severe as the periodic swoons of the stock market. The worst calendar year for intermediate-term bonds was a loss of 5% in 1994. By contrast, the worst year for blue-chip equities was a drop of 43%, during the Great Depression.

Keep your tweaks small. Making big adjustments to your portfolio now because you think rates will rise more could backfire, warns Aliaga-Diaz. Suppose you move all your bond money into short-term funds to minimize the effects of a rate hike.

“You could well have a situation in which short yields don’t increase as much as anticipated,” he says, “because the Fed decides to pause—which is very possible. Then you’d be sitting in a portfolio yielding 0.5% and giving up a lot in forgone income.”

Think inside and outside the box with Treasuries

At 1.9%, 10-year Treasuries are paying about what they did at the end of 2014. But that’s likely to change this year. “Assuming a 2% inflation rate, fair value for the 10-year Treasury would be around 3.25%,” says Bryan Whalen, portfolio manager for TCW.

Given the sluggish economy and low oil prices, Whalen says he’d be surprised if the 10-year Treasury yield hits that level. But the consensus forecast from the National Association for Business Economics puts the 10-year yield around 3% by the end of 2016.

Why does this matter? If you plan to hold on to your Treasury securities until maturity, it doesn’t really. Uncle Sam has such a fine record of paying his obligations that Treasuries are considered virtually risk-free.

Hang onto your bonds and you’ll get all your interest payments on time and your principal back when the bond matures.

The trouble comes if you have to sell before maturity or if you invest through a fund. In the case of an individual Treasury, suppose you have a 10-year note that pays just under 2% interest. Now assume market rates rise and new Treasuries start paying 3%. Other investors will look at your 10-year notes as they do a skunk in the cellar.

You can’t go back to the U.S. Treasury and ask for a higher yield. Instead, you’ll have to reduce your note’s price so that the interest payment divided by the price equals 3%.

Mutual funds that invest in Treasuries or other types of bonds must mark their holdings to current prices every day. So your fund’s share price will reflect the daily increases or decreases in interest rates, leading to a bouncy ride.

With new money, shorten up … With rates rising, play it safe when it comes to the interest-rate sensitivity of your investments, says Brian Brennan, a portfolio manager for T. Rowe Price. Start by looking at the so-called duration of the funds you’re planning to buy.

Duration is a calculation that measures a fund’s reaction to interest rate fluctuations (most funds provide that information on their websites, or you can look up a fund’s duration at Morningstar.com).

A broad bond market fund has a duration of about five years, which means that if market rates were to rise one percentage point, the fund’s value would drop 5%. Add back the yield, and you’re looking at a total loss of around 3%. On the other hand, Vanguard Short-Term Bond (VBISX), which is in our Money 50 list of recommended funds, sports a duration of 2.7 years and yields 1.2%. So if rates were to rise one point, losses would be closer to 1.5%.

… and think counterintuitively. In a low-yielding world, few bonds pay less than Treasury-Inflation Protected Securities, making these inflation hedges a hard sell. Yet they could represent a good opportunity, especially if oil prices rise and inflation is back in the discussion.

The paltry yields on 10-year TIPS reflect an assumed inflation rate of just 1.6% for the next decade. The government’s consumer price index rose less than 1% in the 12 months ended December, but that’s entirely because of the drop in oil prices, which have since fallen even further to around $30 a barrel.

If crude returns to the $60 to $80 level — the consensus estimate from the National Association for Business Economics is $54 by the end of 2016 — CPI should rise faster than current TIPS yields reflect. “If oil goes up, they’re underpriced,” Brennan says.

When you invest in a corporate bond, you expect a higher payout than what you’d get from a Treasury, because there’s always a chance that the issuer will default. Ten-year high-quality corporate bonds were yielding 2.6% at the end of last year. And low-quality “junk” bonds — rated BB or below by S&P, or Ba and below by Moody’s — were yielding 8%, up from 5.9% earlier in 2015.

That type of payout may seem tempting, but be very careful in 2016. There’s a reason junk bonds have to pay you so much.

Lighten up on junk. The high-yield default rate in October rose to 2.8%, up from 1.7% a year earlier, according to Moody’s Investor Services. While that’s below the historical average default rate of around 4.5%, “it’s on a rising trend,” says John Lonski, managing director and chief economist for Moody’s Capital Markets Research Group. “We expect it to rise another percentage point” in 2016.

Why? For starters, tighter monetary policy by the Fed could slow the economy, making it that much harder for weak companies with higher debt levels to thrive.

At the moment, the greatest default risk comes from bonds issued by companies in the energy and commodity sectors, which are having miserable years and which account for about 30% of all junk bonds, according to Kevin Kearns, a bond fund manager at Loomis Sayles. Adds Lonski: “While there’s still some upside potential in the high-yield market, I think the downside risks exceed the potential gains.”

Instead, think about a high-quality corporate bond fund that dabbles in the lower end of the high-quality pool — such as iShares iBoxx $ Investment Grade Corporate Bond (LQD). The Money 50 fund owns no junk, but more than 40% of its portfolio is rated BBB, the lowest end of the investment-grade universe. This allows the fund to sport a yield of 3.5%. While that’s shy of the 5.5% average yield for junk funds, LQD is about 20% less volatile than high yield.

Despite some recent high-profile defaults in Stockton, Calif., Detroit, and Puerto Rico — whose debt was held by a surprising number of funds — an area of relative strength is municipal bonds issued by state and local governments. “Overall, the default rate is very low, and given that the U.S. economy will grow at a faster pace than most of the developed world, that bodes well for muni credit for the next 12 to 18 months,” says David Hammer, portfolio manager at Pimco.

Plus, muni income is federally — and in some cases, state and locally — tax-free.

Bolster your stake before rates rise. Munis were recently yielding about 85% of what Treasuries of similar maturities paid, which is in their normal range. Even if you’re in the modest 25% income tax bracket (earning $37,651 to $91,150 for singles), the 1.6% payout of a 10-year AAA-rated muni is the equivalent of earning nearly 2.1% on a Treasury.

Munis also tend to fare better in rising rate environments. One reason: As rates rise, tax-free yields become more attractive to investors. At the same time, budget-conscious states and municipalities issue fewer bonds. So demand for munis will probably increase just as the supply of this debt is set to fall.

A good way to invest in munis is through a home-state fund to capture state and local tax breaks. But if your state isn’t financially sound, go with a diversified national portfolio like Vanguard Intermediate-Term Tax-Exempt (VWITX), which sports a duration of less than five years. The fund has beaten nearly 80% of its peers over the past decade.

Here, too, go with quality. More than 75% of Vanguard Intermediate-Term Tax-Exempt is held in bonds rated AA or higher, which offers added stability if rate hikes hurt the economy. Beyond quality, check funds for potential Puerto Rico holdings. Some Puerto Rican debt is in default, and the situation is unresolved. “Even small exposure can have a big impact on your fund,” Hammer warns.

You won’t make a ton of money in munis in 2016. On the other hand, you won’t pay taxes on what you do make. And this year, the point isn’t to make off like a bandit. It’s to strike a balance.