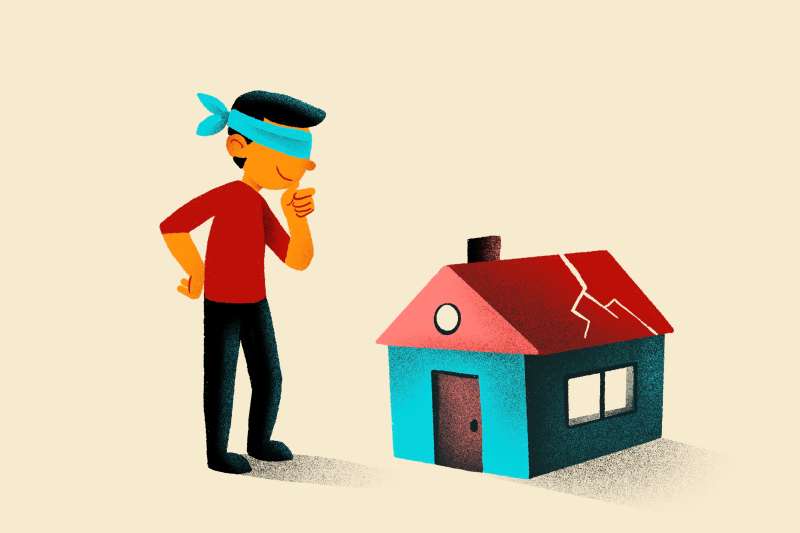 Jeff and Jessica Falkowski’s homebuying journey should be a cautionary tale. The couple, along with their one-year-old son Jack, have been shopping for a home in Westchester, N.Y. since February. Though they’ve made offers on four homes, they’ve yet to actually buy one.

In two deals, they were outbid. The other two? They backed out after home inspectors found serious defects on the properties.

“Of the houses that failed inspection, one had a termite infestation, and one was covered in asbestos floor to ceiling,” Jeff says. “We found out about the problems after the sellers had accepted our offers and we were doing the inspection before closing. At that point, we were really emotionally invested and heartbroken when we found out.”

The losses hit hard for the Falkowskis, who have outgrown their small Manhattan apartment — especially with another little one on the way.

“There’s been tears, junk food binge eating and short weekend getaways to deal with the misery,” he says. “After you have an accepted offer, you just can’t help but imagining yourselves living in the house, and then suddenly it’s over. You have to pick up the pieces, get back out there looking and start the whole process again.”

The Falkowskis’ story underscores the importance of home inspections in the homebuying process — a step many buyers are skipping to get ahead in today’s competitive market. According to data from real estate brokerage Redfin, 20% of winning buyers waived their right to an inspection in June. That’s up 13% from a year earlier.

“Removing the inspection contingency means that a buyer will not ask for repairs,” says Karen Parnes, owner of NextHome Your Way realty in Rockville, Md. “It’s also one less reason that a deal can fall through.”

The dangers of waiving your inspection

In most transactions, a buyer includes what’s called an inspection contingency in their sales contract. This allows them to get a professional inspection of the property — within a certain number of days — and then renegotiate based on the inspector’s findings. (Home inspections cost $300 to $400 and typically takes around 10 days, though it varies by state. In California, the default contingency period is 17 days.)

If the inspection reveals problems, the buyer has a few options: ask the seller to repair them, request closing credits to offset the cost of making the repairs themselves or renegotiate the sales price. (Some sellers will include a clause saying they are not responsible for repairs below a certain value.) If the defects are severe enough, buyers can also back out of the deal entirely.

“There is a lot of competition for homes in certain areas,” says Karen Kostiw, a real estate agent with Warburg Realty in New York. “Sellers are receiving multiple offers — often significantly above the list price — and buyers are desperate to distinguish themselves from the competition. To do so, many buyers are waiving their inspection contingency in order to win the bid.”

Waiving that contingency can have grave consequences, though. For the Falkwoskis, it would have meant moving into an asbestos- or termite-ridden home. For others, it might mean hidden flood damage, mold, mildew, pest infestations or other costly repairs and concerns.

“The dangers are you may buy a home that is not in great shape, has some structural issues or, worse, has some safety issues,” says Christopher Arienti, broker/owner at RE/MAX Executive Realty in Franklin, Mass.

Welmoed Sisson, a home inspector with Inspections by Bob in Frederick, Md., has seen some of those safety issues first-hand.

“During one inspection, I discovered that a natural gas water heater was improperly vented and was spewing carbon monoxide-containing exhaust into the living space,” Sisson says. “The owners didn’t know about it, as the break in the pipe was virtually impossible to see. This is the kind of defect that can kill people from carbon monoxide poisoning.”

Glen Champlin, who owns Glen’s Home Inspections in Deep Creek Lake, Md. has seen his fair share of issues, too. Some of the worst? Those include bat colonies in the attic, dead animals in the furnace and a main sewer pipe that emptied into a home’s crawl space.

Even when an inspection doesn’t reveal major problems, it can provide a buyer with important information about the maintenance and repairs they may need to take on later.

“The dangers of waiving the home inspection can be significant,” says Kathleen Kuhn, president and CEO of New Jersey inspection company HouseMaster. “Without a home inspection, the homebuyer has no way to budget for major repairs or system replacements down the road. These costs can really add up.”

(In general, it’s smart to budget about 1% of your home’s value toward annual maintenance. Four percent if it’s more than 25-years old.)

Stay competitive, but reduce your risk

Clearly, skipping an inspection could come back to haunt you. Fortunately, doing so isn’t your only way to stand out as a homebuyer.

Here are a few other strategies agents recommend instead:

“There are ways to improve your contract without canceling an inspection. Many buyers are doing a pre-inspection — which is a shorter inspection before placing the offer, but it checks the main systems of the property. The risk in this is paying for an inspection without having your offer accepted yet. If the seller chooses another offer, you may have inspected the property for nothing.” — Parnes

“Shortening the inspection contingency is the next best thing. Most inspections now are ‘as-is,’ so even if there is an inspection, a buyer is stating that they will not ask for any repairs. Placing an as-is inspection that is one or even two days long is still competitive and allows a seller to quickly move on to the next contract if things don’t work out.

When we are negotiating a normal contract, a home inspection contingency is seven to 10 days. When there are multiple offers it’s usually five days, and with the recent craziness, the shortest I have done is one day.” — Parnes

3. Have a contractor or home inspector attend a showing with you.

“Having a trusted contractor or home expert walk the home with buyers prior to making an offer is always a good way to learn more before taking the risk. At least then the buyer has an idea of the home’s condition from an experienced professional and feels more confident about their choice to waive inspections.” — Tim Garrity, co-founder of Copper Hill Real Estate

4. Include an appraisal guarantee.

“Let’s say the purchase price is $300,000 and the home appraised for $275,000, so there is a difference in $25,000 that the buyer can’t get via a loan from the mortgage company because it appraised low. If they had that appraisal guarantee in the purchase agreement, the buyer would have to bring an additional $25,000 to closing … We’re seeing a lot more of that.” — Kris Lindahl, CEO and founder of Kris Lindahl Real Estate

“Purchase a home warranty, as they are not expensive and can cover major items, such as a roof — maybe not replacement, but at least repair.” — Garrity

“I recommend requesting property records to gain a full understanding of any renovations or construction that has previously taken place on the property.” — Carolina Gerdts, executive vice president of RelatedISG International Realty

Get to Know the ‘Leaseback,’ the Pandemic House Selling Trend Where no Move Is Required

In the Competitive Coronavirus Housing Market, This Loophole Is Making It Easier to Buy a House