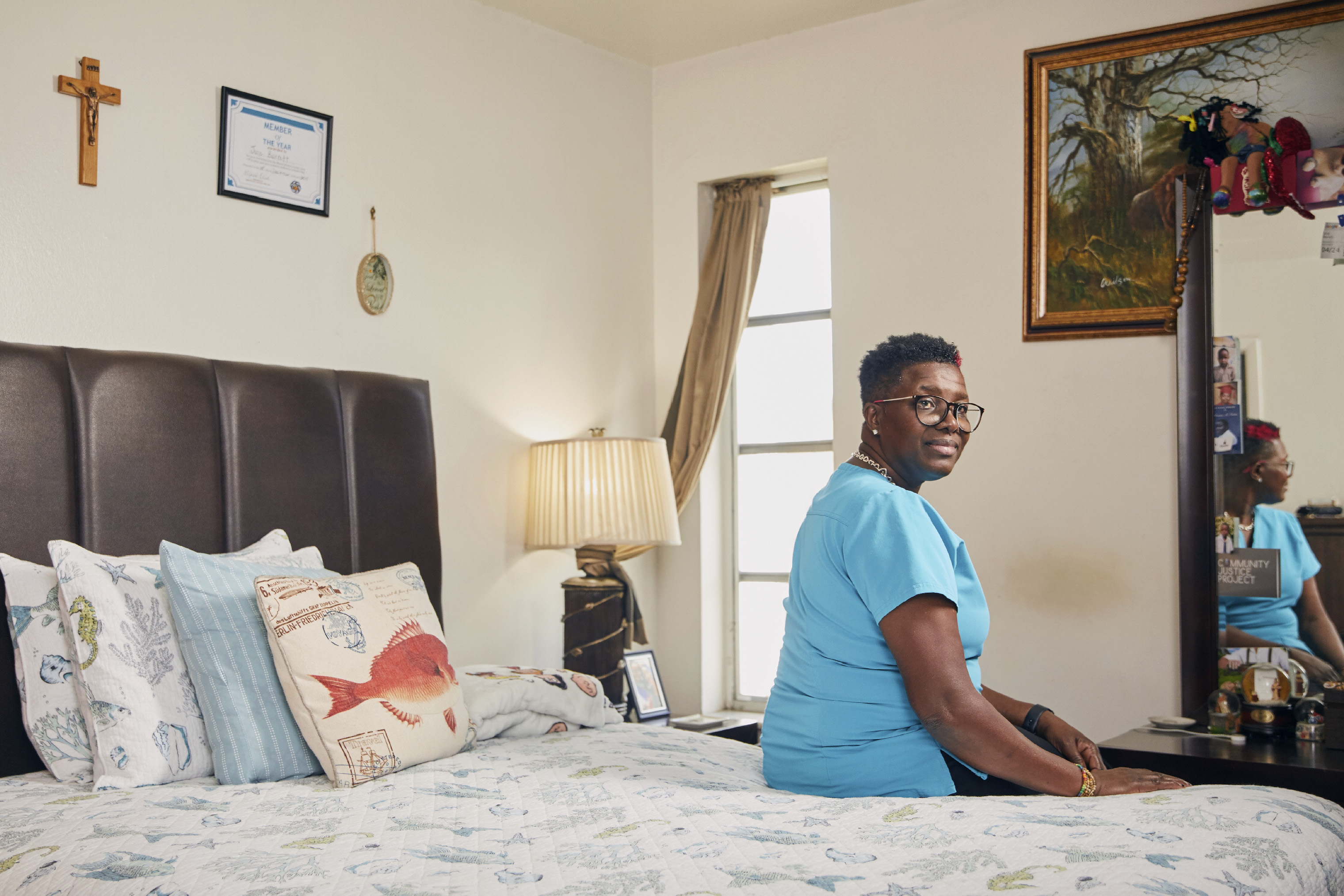 June Barrett at her home in Miami, Florida on March 29, 2019.
Photograph for Money by Mary Beth Koeth

'There Is a Real Crisis': Domestic Workers Are In High Demand, but the Jobs Have Few Protections and Little Pay

“Just about everyone is struggling with finding care for someone.”
Jennifer Calfas

On her first day as a caregiver for an elderly man in 2014, June Barrett's new client asked her to join him in bed. The next morning, he grabbed Barrett's breasts. And for weeks, he continued to sexually harass and assault her, saying explicit things and groping her without permission.

Barrett, now 55 years old, has been a caregiver her whole life — starting when she was just 14 years old in Jamaica. For decades, she worked for different clients, mostly in Miami, persisting through sexual harassment, working while sick, and taking home smaller paychecks than what she originally agreed to. That’s because Barrett had little to no workplace protections or options legally to report these issues — a situation millions of domestic workers find themselves in today.

“The worst part was that I had to stay until I was able to transition from out of there,” says Barrett, recalling her experience with sexual assault on the job. “Where would I go? I had my bills to pay. I’m strong, but it was horrific.”

Domestic work is one of the fastest growing professions in the United States. It’s also one of the least protected. Whether caring for toddlers or the elderly, domestic workers have been historically left out of major labor protection laws. Their employers — ranging from agencies that help place domestic workers with clients to individuals looking for nannies or home health aides — aren’t required by federal law to provide paid sick leave or vacation time or benefits like health care or retirement plans. They aren’t required to pay minimum wage or follow overtime rules. And there's little oversight in how cases of sexual harassment or assault of domestic workers on the job are handled.

There are more than 2.5 million domestic workers in the U.S. and that number is expected to balloon over the next decade. The number of home health aides and personal care aides alone is expected to grow 47% and 39%, respectively, over the next several years, according to data from the Bureau of Labor Statistics. (The number of childcare workers is expected to jump by 7% — which is about as fast as the average job growth in all occupations measured by the agency.) Because this work is often based in the privacy of individual households, “there is a lack of visibility” that makes this growth less noticeable and, therefore, less protected, says Peggie Smith, a law professor at Washington University in St. Louis and a prominent scholar on the regulation of care work.

Operating without basic protections, while demand for work grows at a rapid pace, simply isn’t an option, domestic workers, advocates, and researchers say.

The rapid growth anticipated for these occupations is, in large part, a result of an aging baby-boomer generation that is living longer than those before them. More domestic workers are needed to keep up — especially since more families are opting for in-home care rather than nursing homes, according to the Bureau of Labor Statistics and labor economists.

“Just about everyone I talk to is struggling with finding or managing care for someone that they love,” says Ai-jen Poo, a prominent labor activist and director of the National Domestic Workers Alliance.

The growing demand for caregivers has helped fuel a national movement of domestic workers fighting for basic workplace rights and better protections. The National Domestic Workers Alliance, created and organized by prominent activists and domestic workers, has pushed for the implementation of a bill of rights for these workers to protect them from sexual harassment and racial discrimination, provide paid sick leave, and require employers to pay at least the minimum wage.

Without protections like these, advocates argue, it’s hard to imagine an influx of workers willing and able to leap into this profession.

“If these jobs continue to be devalued and seen as less-than work, then we’re going to continue to not be able to attract people to it,” says Stacy Kono, director at Hand in Hand, a domestic employer network that has worked with more than 5,000 clients across the country.

“There is a real crisis that’s already here,” adds Smith, the law professor at Washington University. “That’s only going to get worse.”

But legal change could soften the blow. Within the last nine years, eight states and one municipality have implemented their own bill of rights for domestic workers. Now, the National Domestic Workers Alliance is pushing for these protections on the national level. Sen. Kamala Harris, a 2020 Democratic candidate for president, and Rep. Pramila Jayapal plan to introduce legislation in Congress this year.

“We’ve got a completely unsustainable workforce, unless we make these jobs good jobs, where you can earn a living wage, get benefits, take pride in,” Poo says. “We can actually try to restore the American dream for the next generation. That, I believe, is a major opportunity in investing in the care workforce.”

Some employers are taking matters into their own hands. More than 200,000 domestic employers have signed a Fair Care pledge — created by the organization, Hand in Hand, and Care.com in 2015 — that stipulates employers must pay a $15 minimum wage for childcare providers and home attendants, grant paid time off and overtime pay, and create a written work agreement for both parties, among other guidelines.

Correcting a history of prejudice

Domestic workers and farm workers were intentionally left out of the National Labor Relations Act of 1935 and the Fair Labor Standards Act in 1938, which gave workers the right to collective bargaining and provided basic protections like minimum wage and overtime pay, respectively. The profession is predominantly comprised of women of color — and prejudice against them kept their jobs unprotected, scholars say.

“[Domestic work] was largely, at that time, a black, African American workforce,” explains Saba Waheed, research director at the Labor Center at University of California, Los Angeles. “Coming out of slavery, the resistance came from Southern lawmakers who, just across the board, did not really see women’s work as real work.”

That prejudice has largely continued to today. “Home work is not valued as real work, and not seen as labor,” Waheed adds.

Conditions for domestic workers have improved somewhat since the 1930s on the national scale. Dorothy Bolden, a domestic worker and civil rights activist in the '50s and '60s, created the Domestic Workers’ Union in Atlanta, where she fought for higher wages and guaranteed Social Security benefits, encouraged members of her organization to register to vote, and set the groundwork for the advocacy workers are engaging in now.

In the 1970s, the Fair Labor Standards Act was expanded to provide more protections for some domestic workers but still excluded baby sitters and health care aides. Little progress came in the decades that followed — and now advocates are following the lead of Bolden and other domestic workers who came before them.

“None of the work we’re doing today is by chance,” says Allison Julien, a former nanny who helped launch the National Domestic Workers Alliance and views Bolden as a role model.

These studies also found that undocumented workers were more susceptible to workplace abuse and lower wages than their documented counterparts. In a national bill of rights for domestic employees, undocumented workers would be protected under the labor, says Rocio Avila, staff attorney for the National Domestic Workers Alliance.

“Workers’ rights, as with other worker protections, apply to someone whether they’re documented or undocumented,” says Kono, the network director for Hand In Hand. “There isn’t a difference in how folks should be treated.”

Julien, who helped launch the National Domestic Workers Alliance, was working as a nanny when she first met Poo in 2002. Poo, who was then the lead organizer of New York’s Domestic Workers United, had been organizing workers for years, visiting playgrounds and commuter hubs around New York City with the intention of finding domestic workers on the job.

A third-generation domestic worker, Julien knew little about the restrictions and limitations of her profession before she met Poo. “Prior to this, none of this clicked,” Julien, who immigrated to the U.S. from Barbados, says. “All parts of that made me know I wanted to do more.”

Domestic workers and advocates who spoke with Money all detailed varying experiences with similar issues: long hours, few breaks, little time off, and unregulated standards. With such restrictions, domestic workers have sacrificed their own personal lives for the sake of caring for another family's livelihood — a reality that was on full display in the Academy Award-winning 2018 film Roma, which followed the story of a domestic worker in Mexico in the 1970s.

Working as a nanny meant 10-hour-a-day shifts, no paid sick leave, and no time to go to the doctor, Julien says. She seldom booked any doctor or dentist appointments, since going to an appointment would often mean missing work — or missing a paycheck. One time, she caught the flu from her clients’ children and her employer berated her for the “inconvenience” it posed, she recalls.

“I don’t believe there should be a negotiation on how we choose to keep ourselves healthy,” she adds.

Change, perhaps, is on the way. New York became the first state to pass a bill of rights for domestic workers in 2010 — with seven states and Seattle following. This past winter, actress and activist Jane Fonda lobbied on behalf of domestic workers and farm workers in Congress. In February, a number of domestic workers and advocates attended the Academy Awards in honor of the film Roma, which, due to its international accolades, has further fueled their work in recent months.

But the work doesn’t stop once these protections are put in place. Enforcing them is a whole other issue — especially since individuals who hire domestic workers may not think of themselves as employers.

Silvia Gonzalez, a domestic worker based in Seattle where a bill of rights went into effect in March, is working to educate her colleagues around the city, she tells Money in an interview while speaking Spanish. She’s holding monthly outreach meetings through Casa Latina, a Seattle-based organization, chatting with other domestic workers on their commutes on the bus, and heading into the suburbs to meet with other workers.

“I can’t look back at how things have been,” says Gonzalez. “I want to look forward.”

So does Barrett, the Miami-based worker. She recently made the decision to leave her full-time, overnight job as a domestic worker to complete a two-year fellowship for the National Domestic Workers Alliance. Now, she will travel the country to advocate for a national bill of rights, use her story to amplify the #MeToo movement in her line of work, and advocate for black domestic workers with the organization’s We Dream in Black program.

With decades of work under her belt, Barrett says domestic work is all she knows. But she hopes her work will inspire others to step forward and fight for a higher standard in the profession, too.

“When you suffer, it’s like you’re in a relationship and it’s abusive,” Barrett says. “Now, I get the chance to go out and tell my story.”

Masiel Torres contributed to this story as a translator.

This post has been updated to more accurately reflect the years in which Dorothy Bolden engaged in activism.