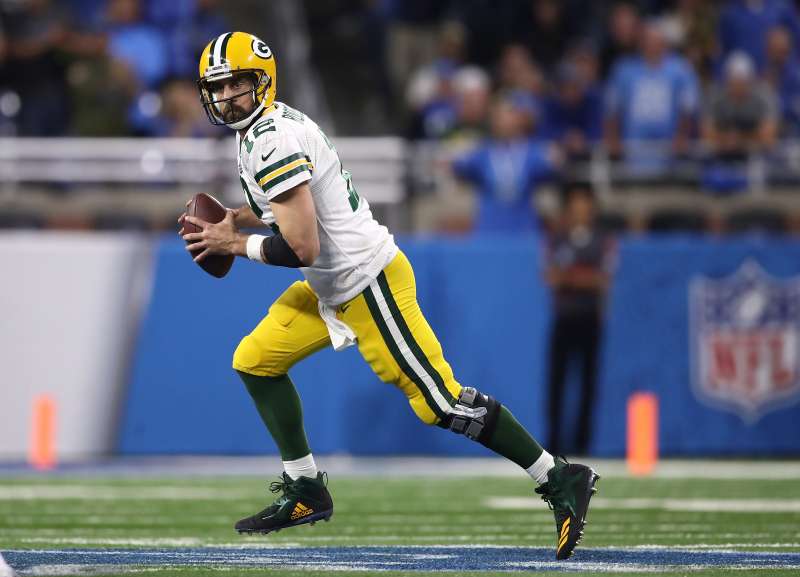 Aaron Rodgers #12 of the Green Bay Packers playing the Detroit Lions on October 7, 2018. The Packers play the undefeated Los Angeles Rams on Sunday, October 28.
Gregory Shamus—Getty Images
Each product we feature has been independently selected and reviewed by our editorial team. If you make a purchase using the links included, we may earn commission.

The NFL game schedule today starts with the Eagles vs. Jaguars, live from London’s Wembley Stadium with a broadcast time of 9:30 a.m. ET.

Some of the other big NFL games today include Broncos vs. Chiefs, Ravens vs. Panthers, Packers vs. Rams, and Saints vs. Vikings, plus Patriots vs. Bills on “Monday Night Football.”

Here’s everything you need to know about how to watch NFL games today for free — online or on TV — during week eight of the 2018 NFL season.

What NFL Games Are on TV Today?

Here is the full NFL game schedule today (Sunday, October 28), including the primetime “Sunday Night Football” Saints-Vikings matchup, and which channels are broadcasting NFL games around the country:

With the exception of the morning game played in London (Eagles vs. Jaguars), which is being broadcast on the NFL Network, all of the other NFL games today are airing on a major broadcast network: CBS, Fox, or NBC. Bear in mind, however, that your local stations won’t be showing every game; you should be able to watch your region’s local team and a few other premier games.

To watch these NFL games for free today on TV, turn on your local CBS, Fox, or NBC station. If you have a satellite or cable TV package, you probably have these channels — and perhaps you have the pay channel NFL Network too.

If you don’t have cable, you can still watch the NFL games for free that are airing locally on CBS and Fox, plus the “Sunday Night Football” game, which is broadcast nationally on NBC. All you need to do for access to these channels is hook up your TV to a digital antenna. A basic digital TV antenna costs around $25, and in most of the country that’s all you need to do to watch over-the-air networks, including Fox, CBS, PBS, NBC, and ABC — totally for free.

How to Live Stream the NFL Games Today for Free

As we have previously reported, there’s a new way to live stream NFL games for free on your phone in the 2018 season:

How to Watch NFL Games Online for Free on Any Screen

If you instead want to watch NFL games on a screen that’s larger than your phone, consider signing up for a free trial of a streaming TV service such as Fubo TV, Hulu Live, DirecTV Now, PlayStation Vue, or YouTube TV.

Each of these services allows you to live stream dozens of channels — including local broadcast networks in most of the country — and they all offer free trials lasting about a week for new subscribers. So, if you were hoping to watch the NFL games today online for free, you could register with one of these streaming services and try out their live streaming capabilities on a tablet, connected TV, or any other screen you like.

Packages with these streaming TV services start at $40 after the free trial period expires. Take careful note of when the free trial is over, and be sure to cancel if you don’t want to become a paying subscriber. You’ll be charged automatically for the first month’s service if you don’t cancel in time.

How to Watch Every NFL Game Today

All of the strategies listed above for watching NFL games are limited by what’s being broadcast on your local TV stations.

If you want to watch games that aren’t being broadcast locally on CBS or Fox, check out a special NFL subscription package, such as the DirecTV NFL Sunday Ticket. With this package, you’ll be able to watch out-of-market NFL games, but you’ll pay for it: Prices start at about $300 for the 2018 season.

The other option to watch out-of-market NFL games is the NFL Game Pass package. It starts at $99.99 for the 2018 NFL season, though you can try it out for free during a seven-day trial period.

NFL Game Pass lets subscribers watch (or stream) every NFL game, but there’s a catch: Access to the games is available only after the games are over. In other words, you can’t watch games live. The tradeoff, beyond a price that’s cheaper than some other packages, is that NFL Game Pass allows you to save time and watch condensed, no-commercial versions of each game.