My Family Evacuated During Hurricane Matthew, and Here's What It Cost

The alarm went off at 3 a.m. last Wednesday, roughly three hours after I’d collapsed in bed after a long night of packing suitcases and debating with my wife about which valuables and sentimental belongings we would be taking with us when we fled our home.

I groaned, turned off the alarm and contemplated ignoring it, finally wrenching myself from bed when I remembered the news reports saying that up to 1 million people would be on the roads that day.

I roused my wife and (very cranky) nine-year-old from their slumber, loaded our belongings and dog into the car -- and our evacuation from Charleston, S.C. was underway.

Hurricane Matthew was coming – and every local authority had made it clear that leaving town was the wisest course of action.

Read Next: See How Hurricane Matthew Is Impacting Businesses and Homeowners

Media reports about major storms usually cite totals in mind-boggling numbers. Matthew, for instance, is being estimated as a weather event that ultimately carries a $4 billion to $6 billion price tag.

Numbers that big are virtually impossible for most people to digest. But individual costs, like the ones my family and I faced, can be a bit more palatable.

Before Governor Nikki Hailey issued the evacuation order, we were thinking about riding it out. But then my wife, a property manager, heard through channels at her office that the storm was tracking closer to Charleston than originally forecast, so she called me with orders to get cash, stock up on gas and other necessities. I filled up my car, bought 15 gallons of gas for our generator (which we’d bought prior to a previous hurricane), along with a few 24-packs of bottled water, batteries and plenty of non-perishable foods.

As we learned more about the projected severity and impact of the storm, we decided evacuation was the best option. In 2015, our area had faced severe flooding and we weren’t eager to relive that experience.

We ultimately decided on a two-fold plan: We would drive to Atlanta, where my sister and her family had graciously agreed to take us in, then I would proceed to Denver, where I had work assignments, allowing us to keep money coming in while we rode out the storm.

Leaving at 4 a.m. that Wednesday was grueling, but ultimately proved wise. Taking my wife’s car, since it has more cargo space, we avoided any nightmare traffic jams and made it to Atlanta in just under six hours, stopping twice for gas (total cost: $49, making our running total $318) and swinging by an iHop so our daughter (who had mercifully fallen back asleep for part of the drive) could get some breakfast ($20 more, bringing the total to $338). Not wanting to be mooches on my sister’s generosity, we offered to pay for some groceries and amenities once we arrived, adding another $64 to the bill.

In order to avoid the 90-120 minute (at best) rush hour drive to the airport for my early morning flight the next morning, I stayed at the DoubleTree Hotel near the Atlanta airport Wednesday night. (Cost: $163.)

Read Next: These Are the Essential Items You Need in a Hurricane

After a chaotic flight to Denver (that involved boarding, de-boarding and switching planes before we ever got out of Atlanta), things settled into a fairly normal rhythm – or at least as normal as it could be – for us all. My wife tried to work remotely. I stayed busy attending events and writing in Denver. And my daughter played with her cousins and tried to get ahead in her schoolwork, while taking a few side trips to places like a used book shop and a nail salon keep her as happy as possible.

Various meals and expenses over these three days, as the storm drew closer to our house and eventually began to impact the area, totaled $561. Add in my hotel fees in Denver of $618.

I flew back to Atlanta Sunday morning. We had originally planned to drive back to Charleston that afternoon, but word from our neighbor (who had decided to brave the storm) was that power was out throughout the neighborhood – and there were downed tree limbs on most major roads. And a quick check of road conditions with the South Carolina Department of Transportation showed Interstate 26 (the primary route back to the city) was packed. (The average drive from Columbia, S.C. to Charleston - normally a 1.5 hour commute - was at or above 4 hours.)

We opted to stay in Atlanta another night.

Read Next: How to Help the Victims of Hurricane Matthew 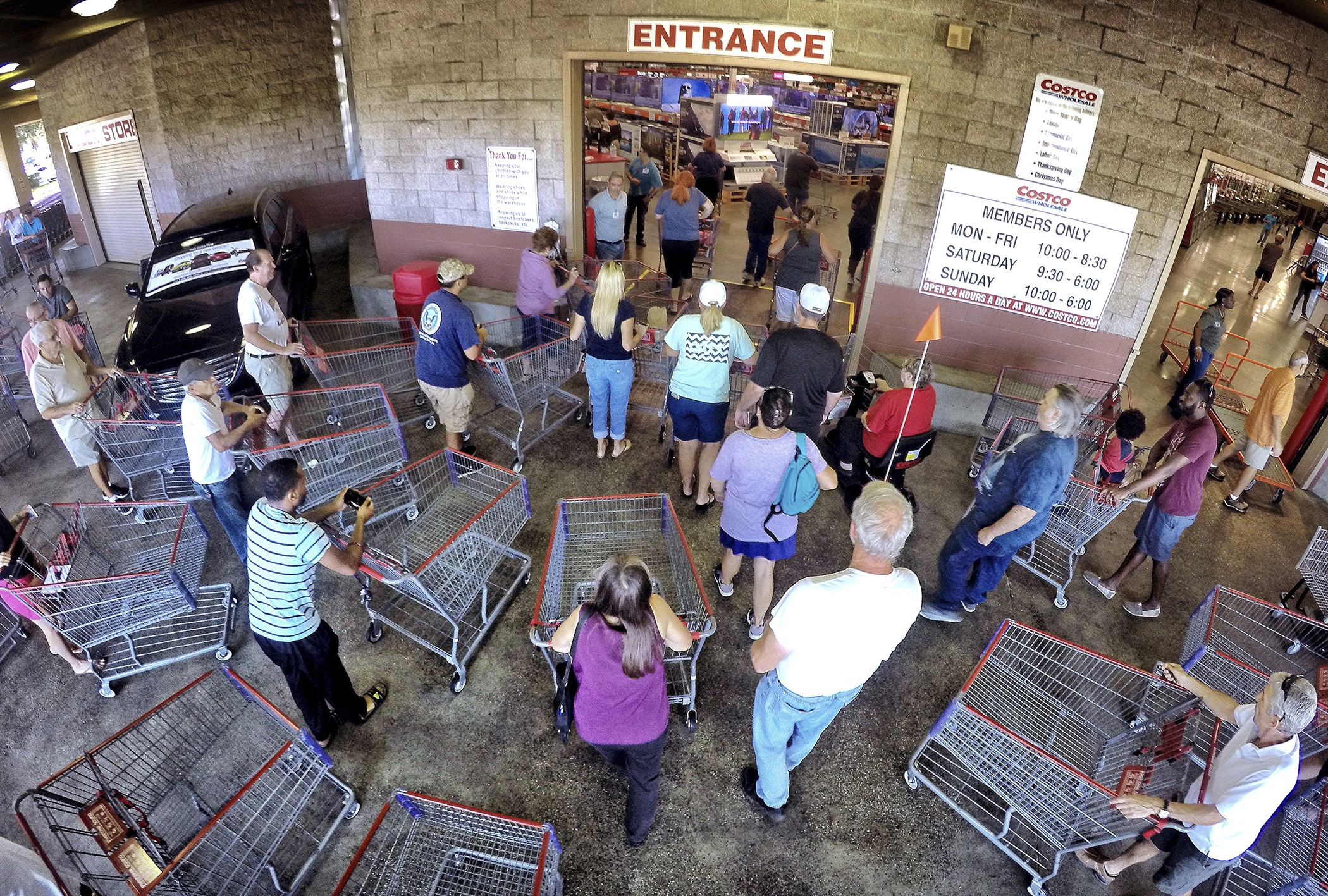 Shoppers crowd the entrance to the Costco store on Oct. 5, 2016 in Altamonte Springs, Fla,. as central Floridians prepare for the anticipated strike of Hurricane Matthew.
Joe Burbank—Orlando Sentinel/TNS via Getty Images 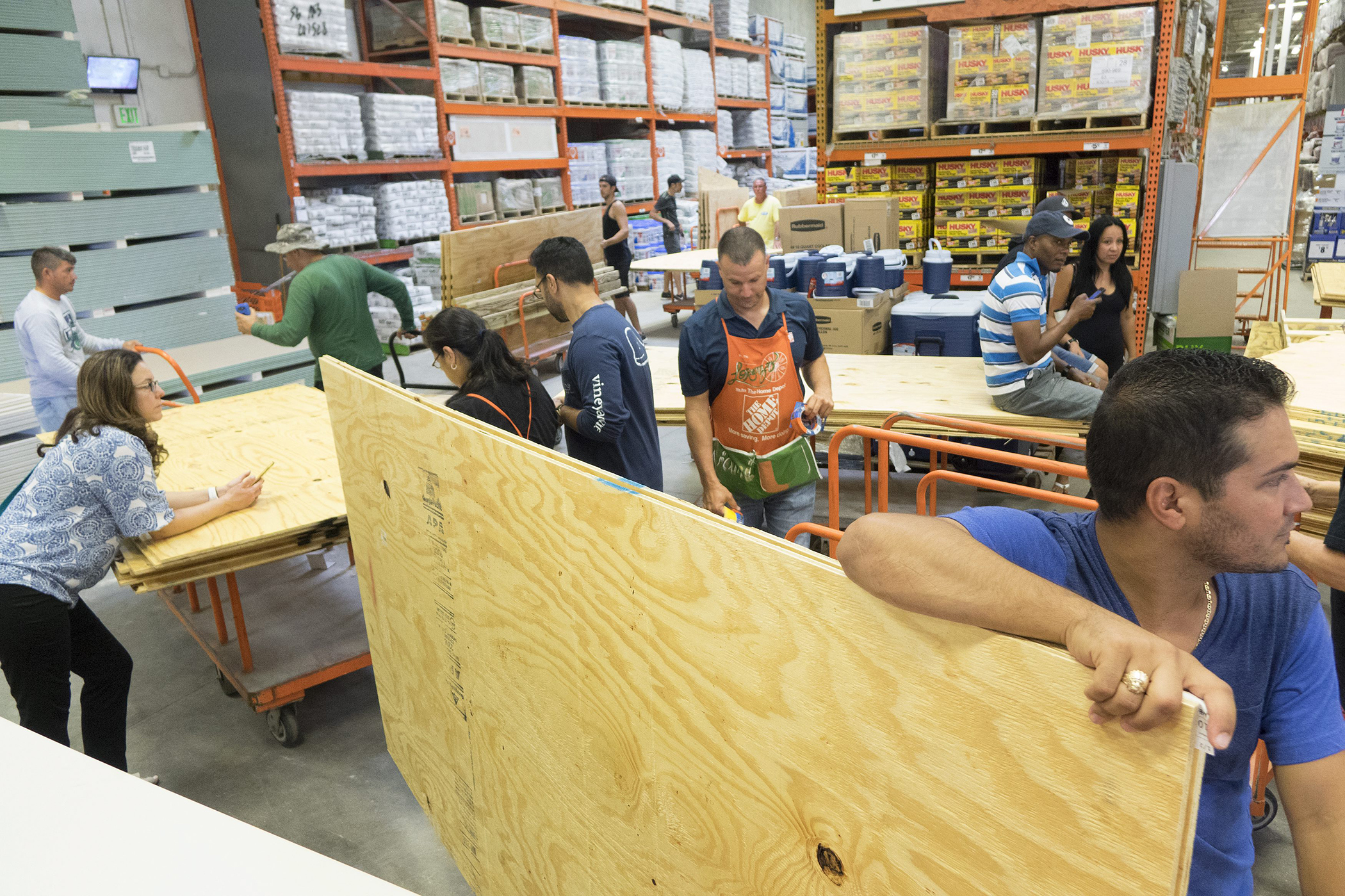 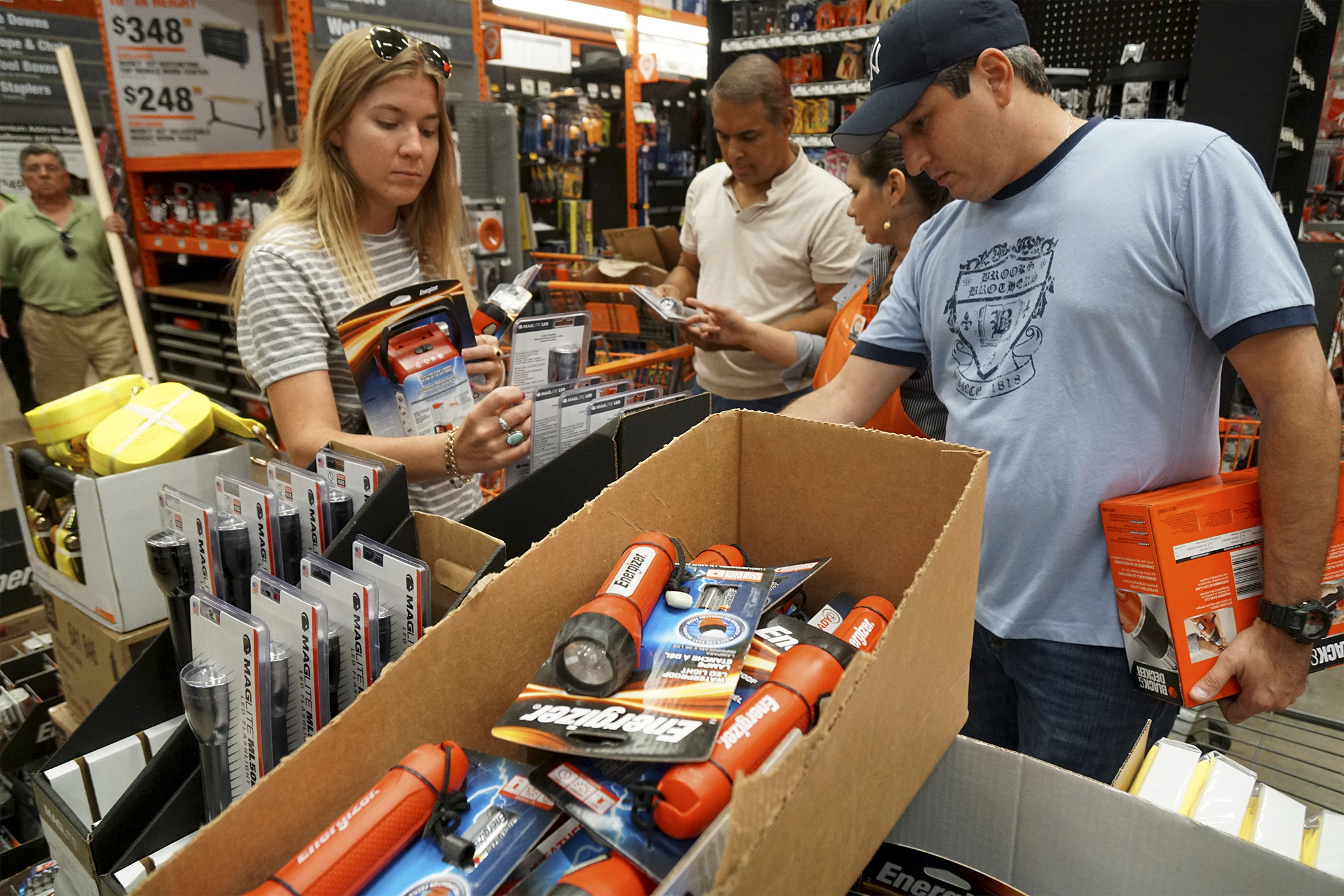 Customers shop for flashlights and batteries at a Home Depot Inc. store in Miami, Florida, on Oct. 4, 2016.
Bloomberg via Getty Images 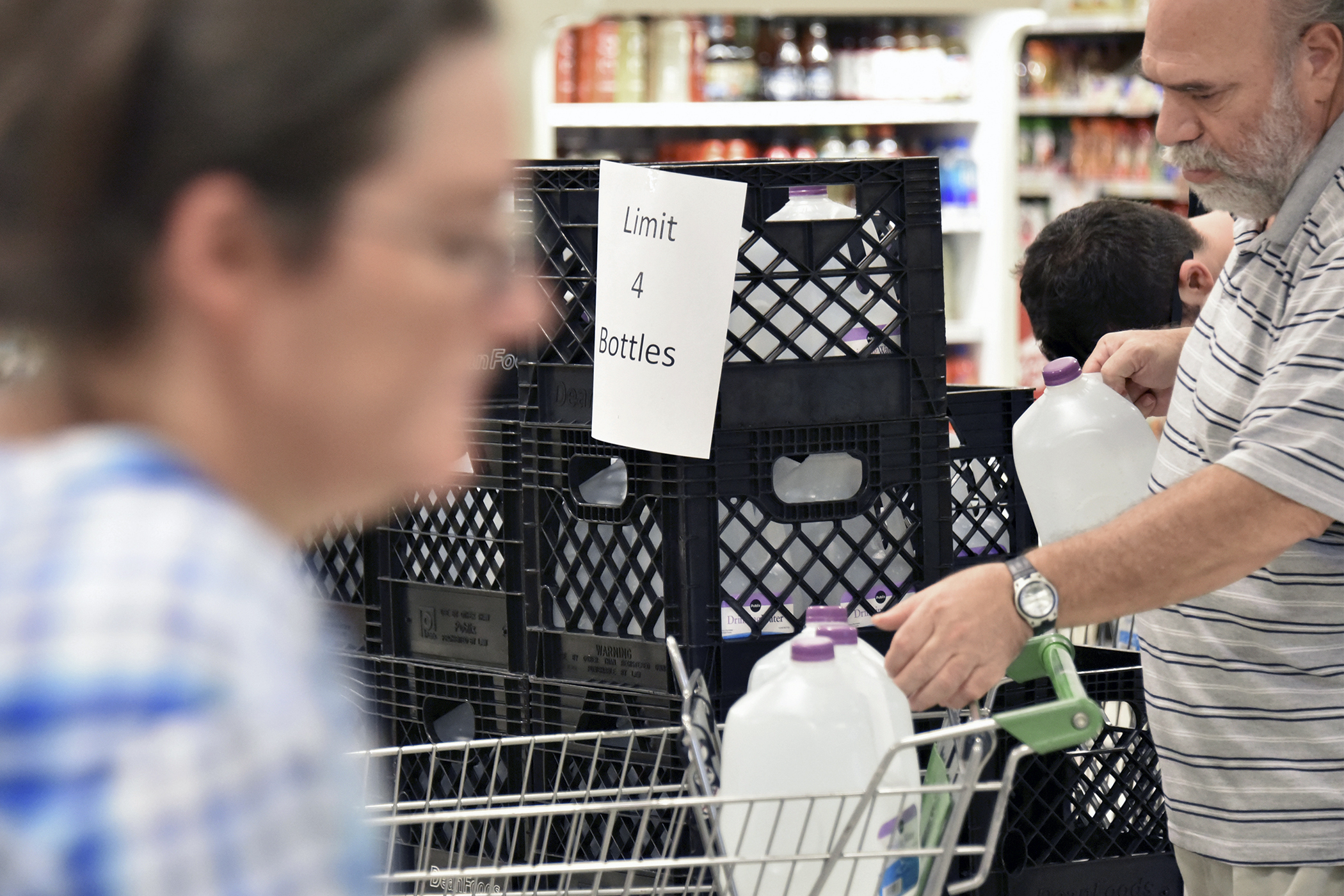 A customer grabs Publix Super Markets Inc. brand purified water bottles at the company's store ahead of Hurricane Matthew making landfall in West Palm Beach, Florida, on Oct. 5, 2016. Hurricane Matthew has thousands fleeing the U.S. Southeast where its expected to batter the coastline and threaten electricity supplies to more than 1 million people. Potential losses are seen as high as $15 billion.
Mark Elias—Bloomberg via Getty Images 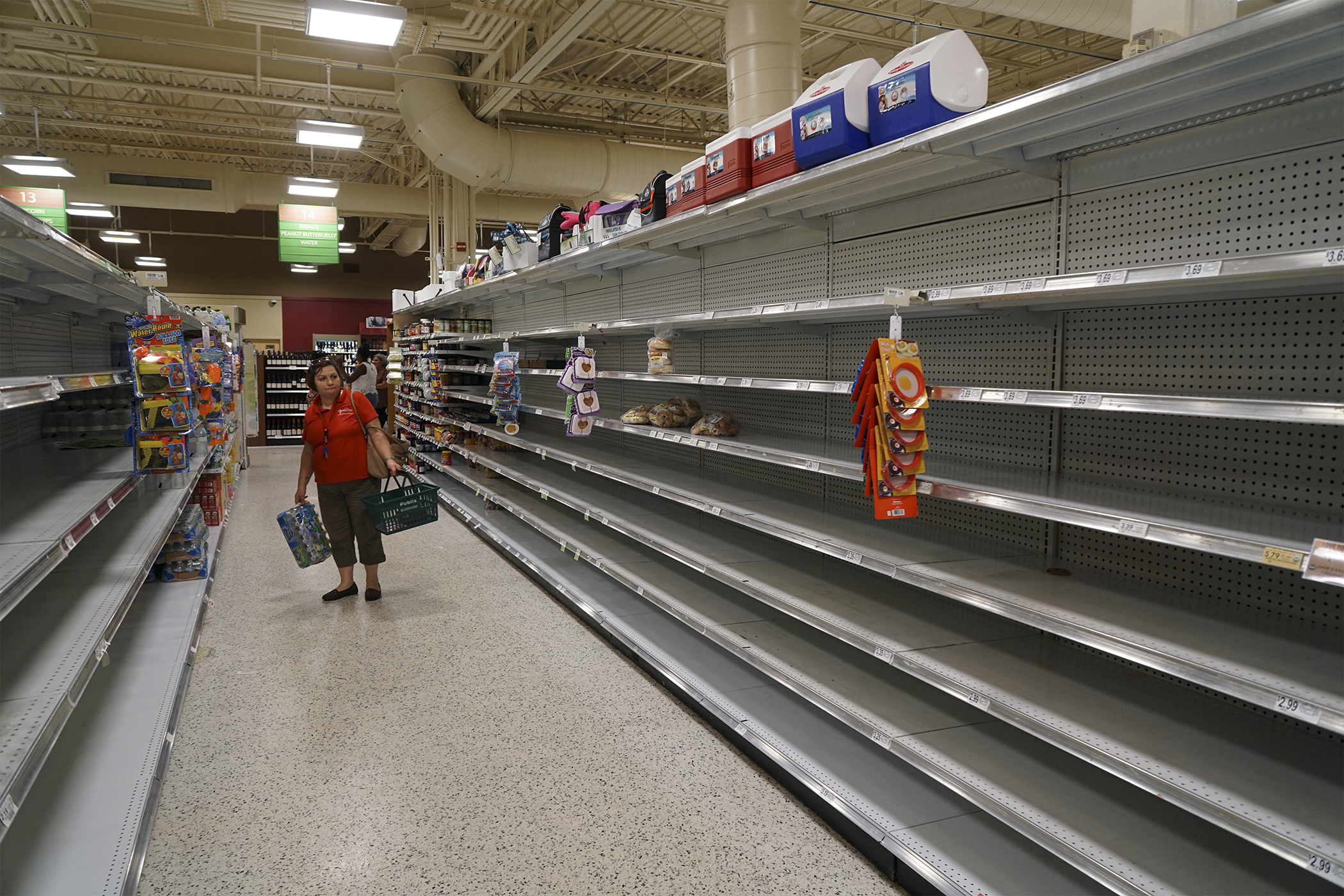 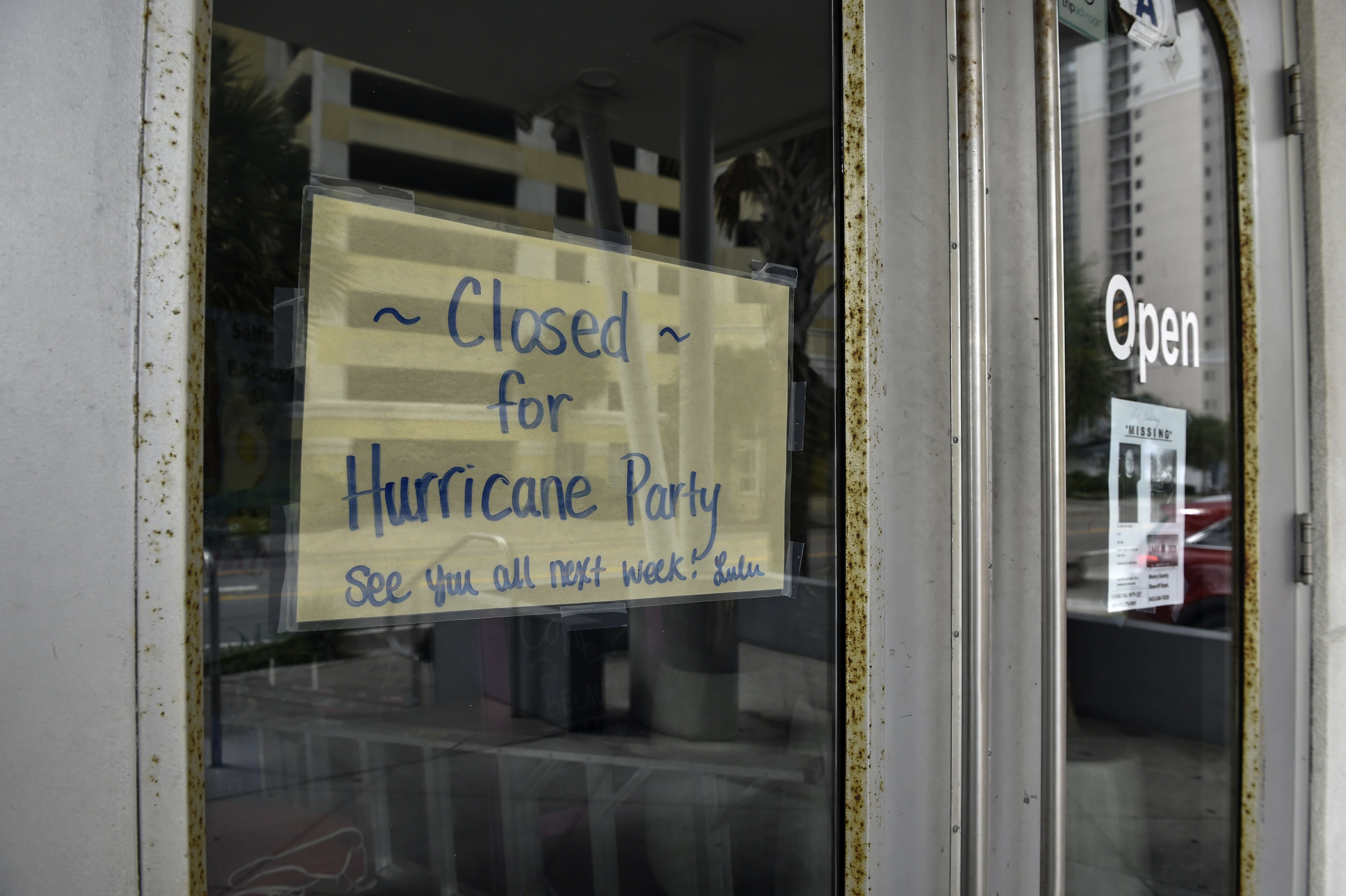 A sign is seen in the door of a cafe in Myrtle Beach, South Carolina on October 6, 2016 as Hurricane Matthew makes its way towards the United States.
Nicholas Kamm—AFP/Getty Images 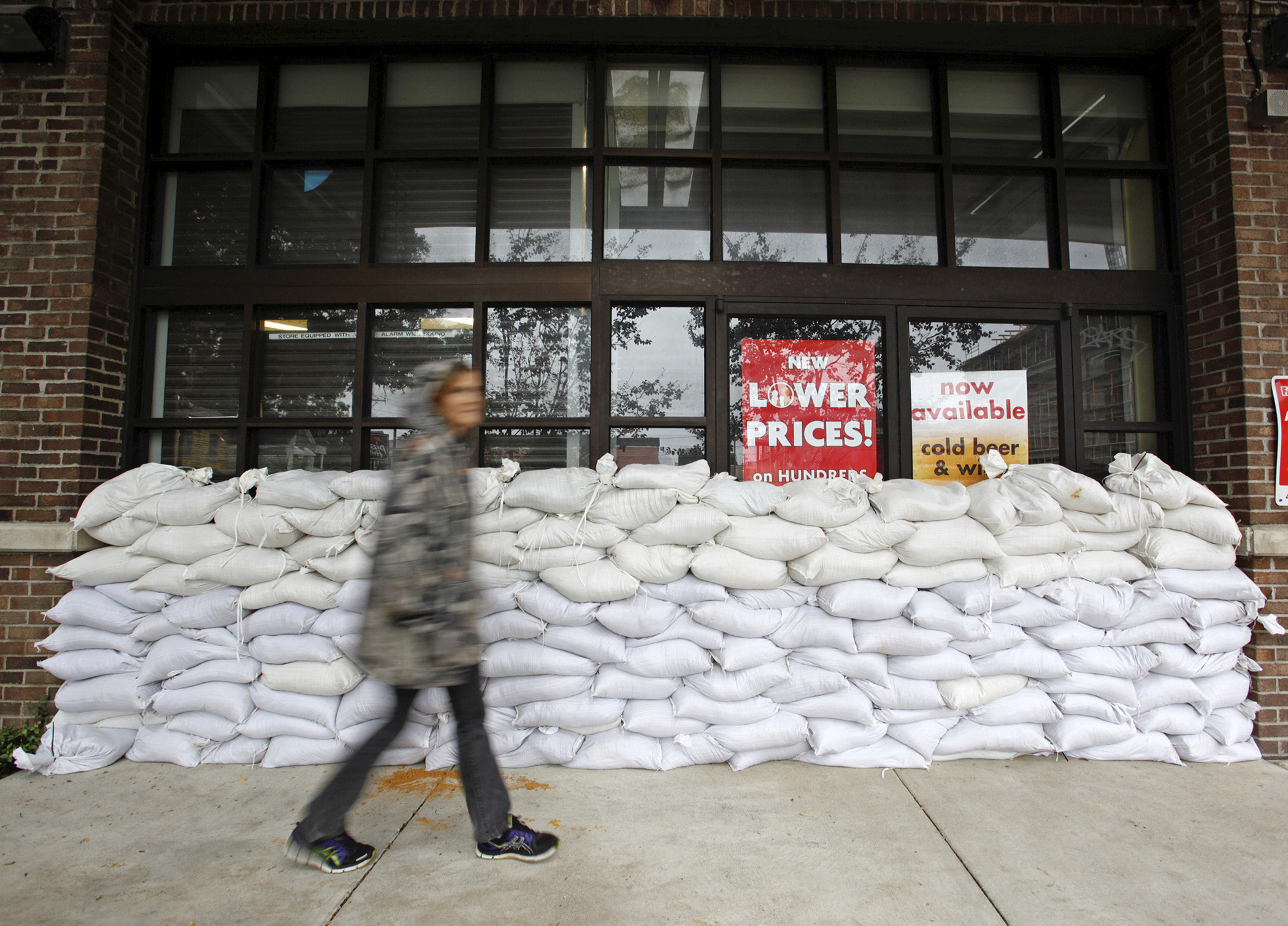 A resident walks past a wall of sandbags protecting a store in one of the city's low-lying areas before the arrival of Hurricane Matthew, in Charleston, South Carolina, October 7, 2016.
Jonathan Drake—Reuters 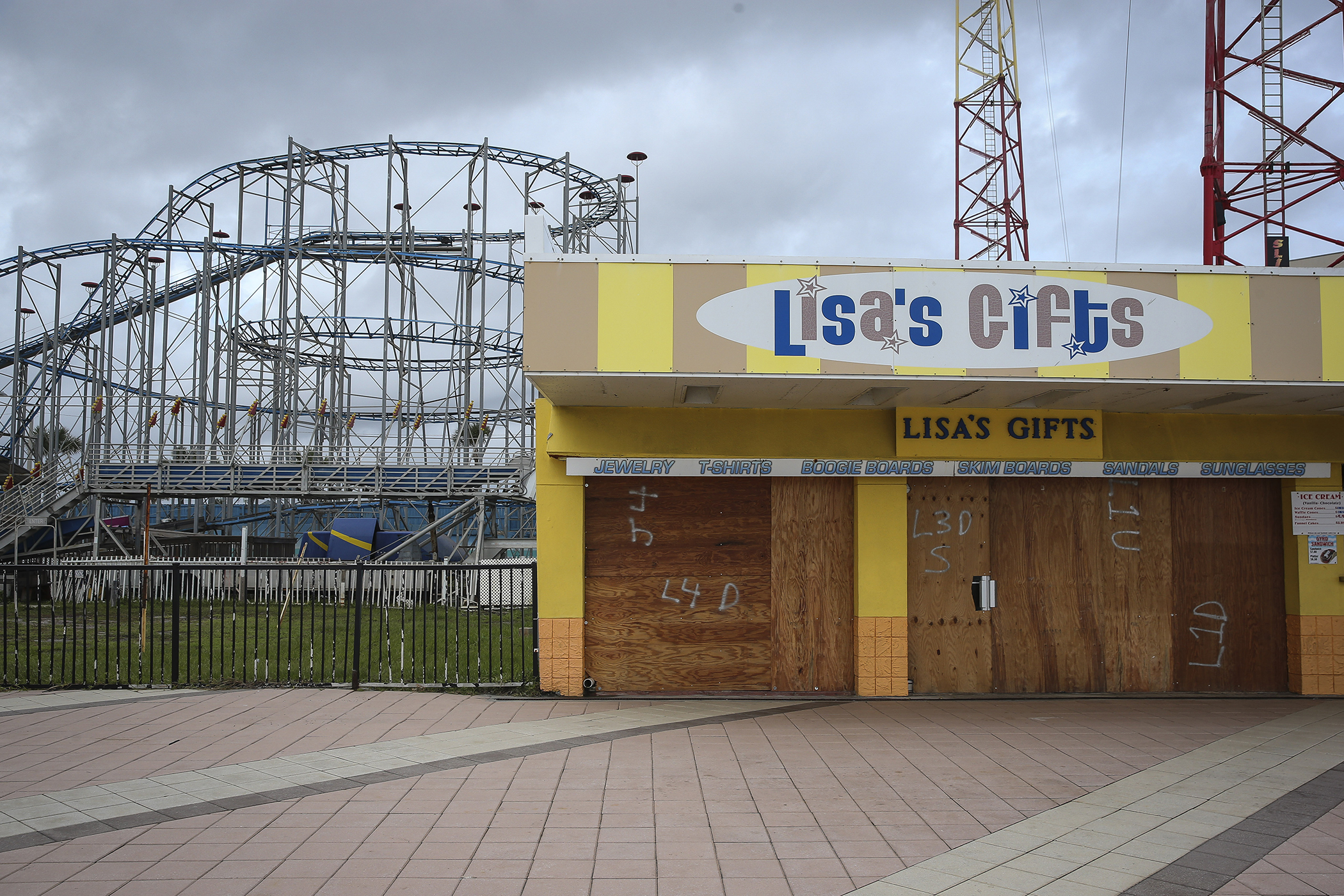 Lisa's Gifts at the Daytona Beach Boardwalk and Pier stands closed and boarded up ahead of Hurricane Matthew in Daytona Beach, Fla. on Oct. 6, 2016.
Will Vragovic—Tampa Bay Times/AP 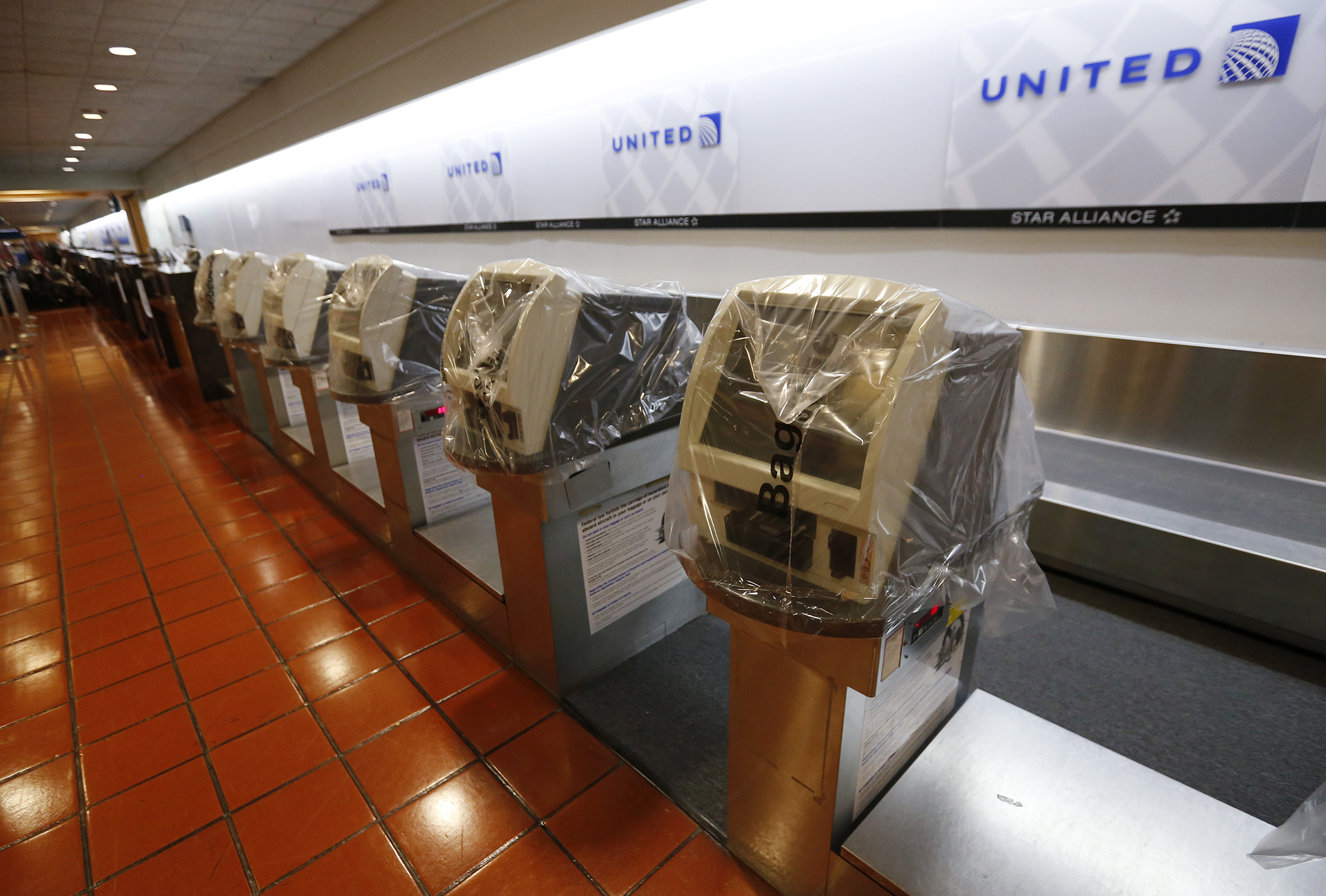 Ticketing machines are covered in plastic and flights in and out of the Palm Beach International airport in the afternoon as Hurricane Matthew advances, Thursday, Oct. 6, 2016, in West Palm Beach, Fla. The National Hurricane Center in Miami said the storm's maximum sustained winds had strengthened to 140 mph as of late Thursday morning and were expected to maintain their strength as the storm approaches the Florida coast.
Wilfredo Lee—AP 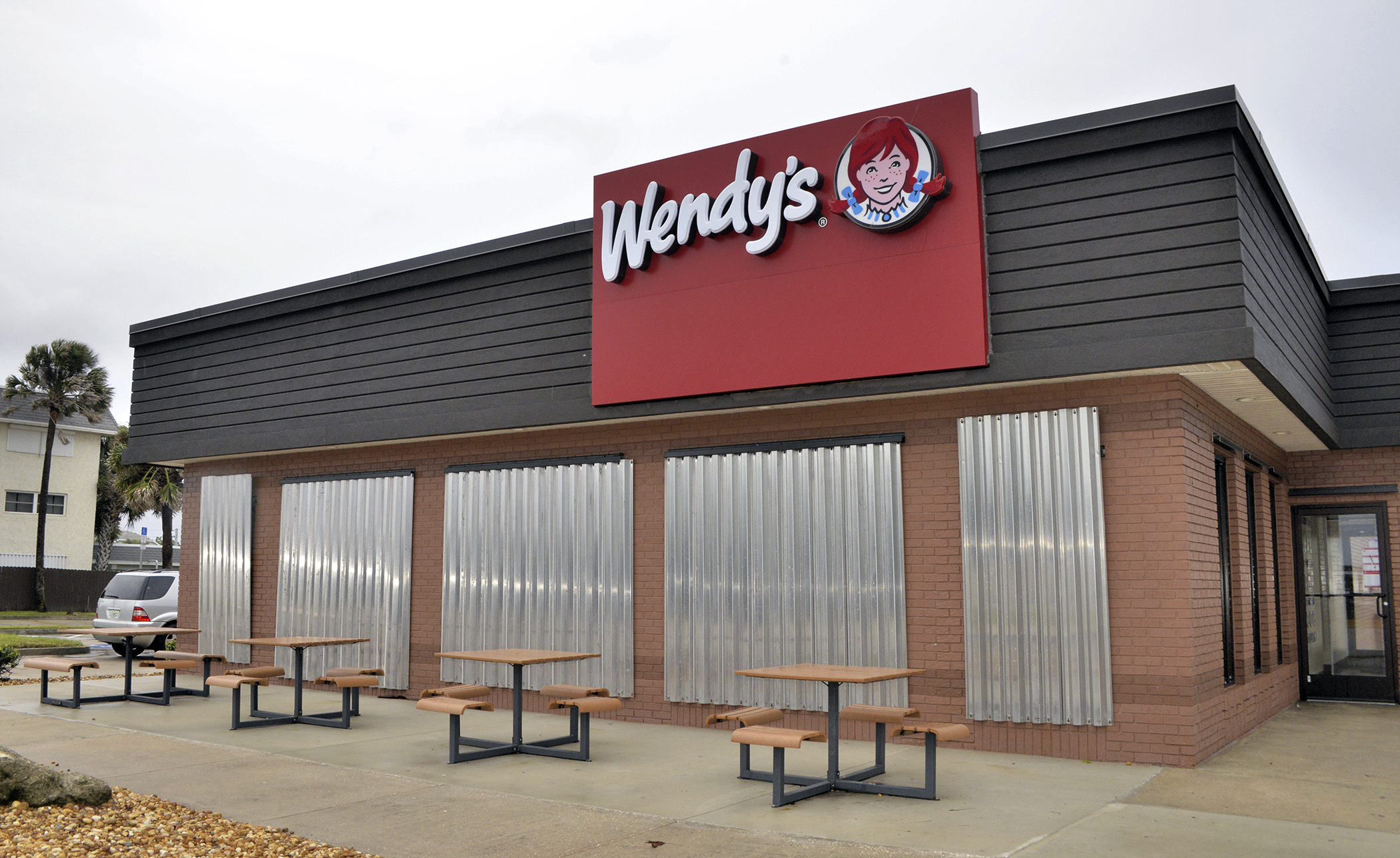 A Wendy's restaurant in Indialantic is closed for the coming hurricane on October 6, 2016. Hotels and businesses in Florida cities and towns like Indialantic, Melbourne and Melbourne Beach are closed, and people stock water, food and gas to be prepared for the potentially devastating storm.
Julian Leek—newzulu.com/Newscom 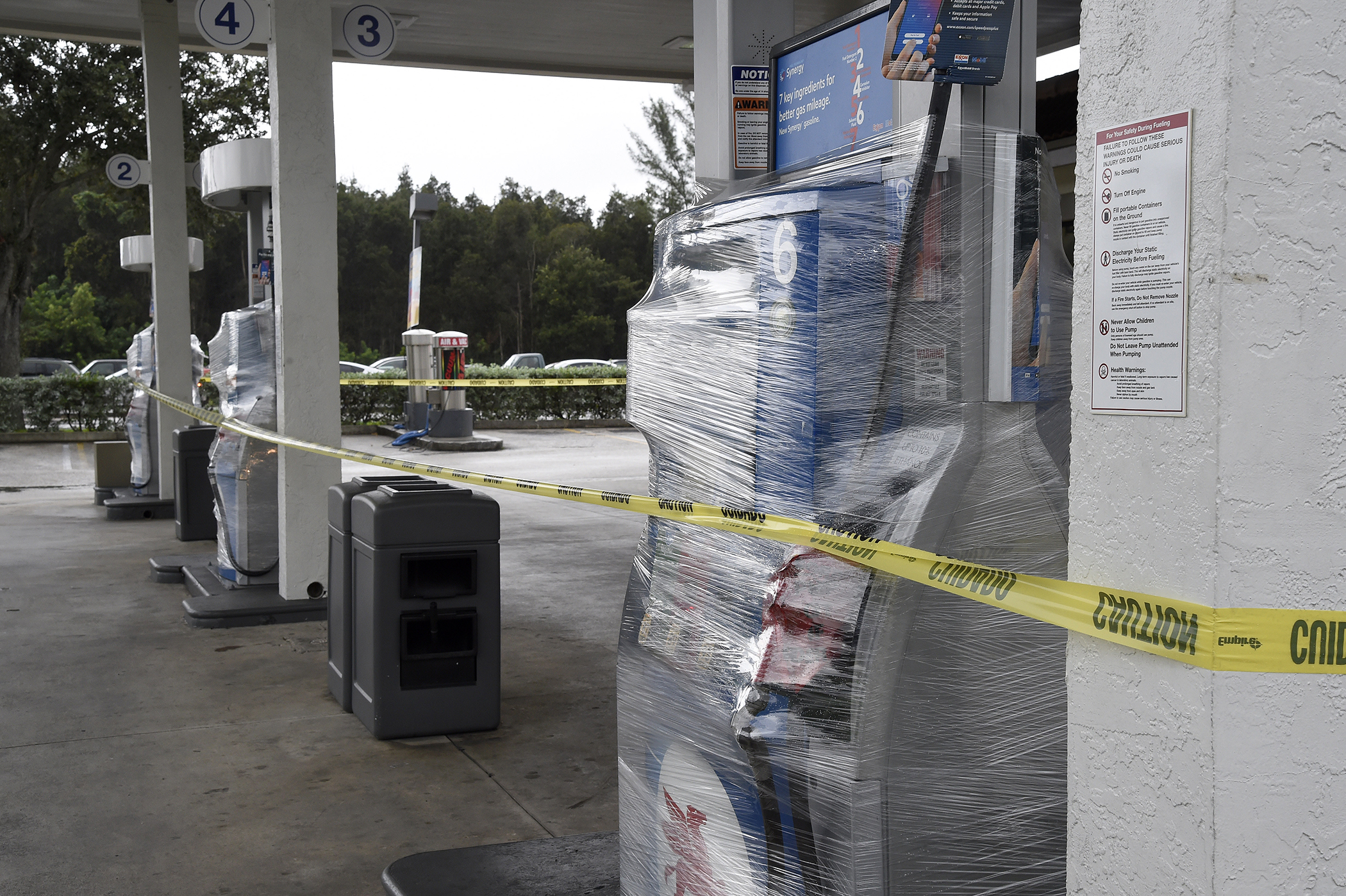 A gas station's pumps are wrapped and closed as many stations in south Florida are out of gas in Miami, Florida on October 6, 2016.
Rhona Wise—AFP/Getty Images 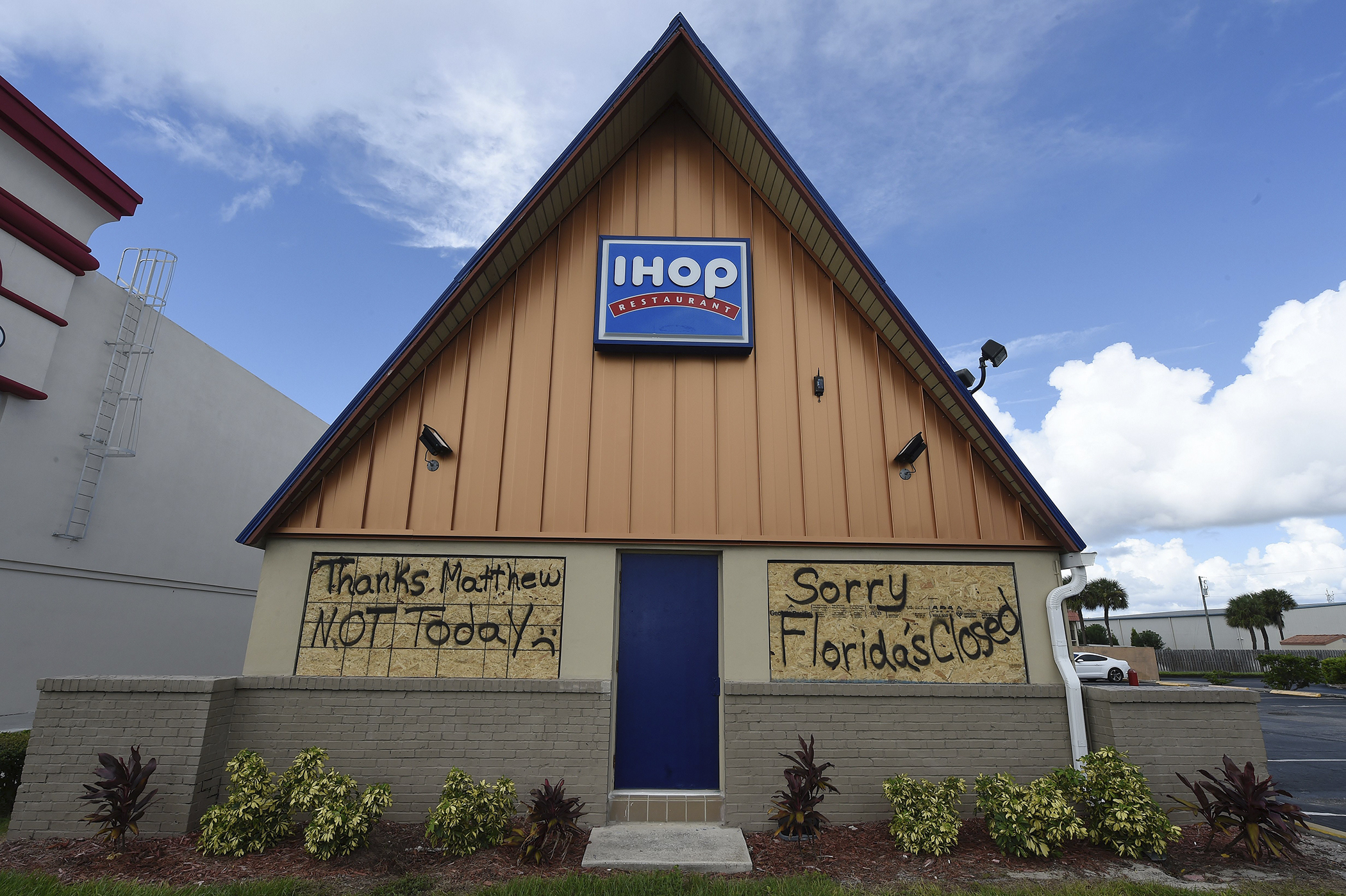 A closed sign is seen at the Exploration Tower in Port Canaveral, Florida on October 5, 2016 as Hurricane Matthew heads north toward the east coast of Florida, possibly as a category 4 hurricane.
Paul Hennessy—Polaris/Newscom 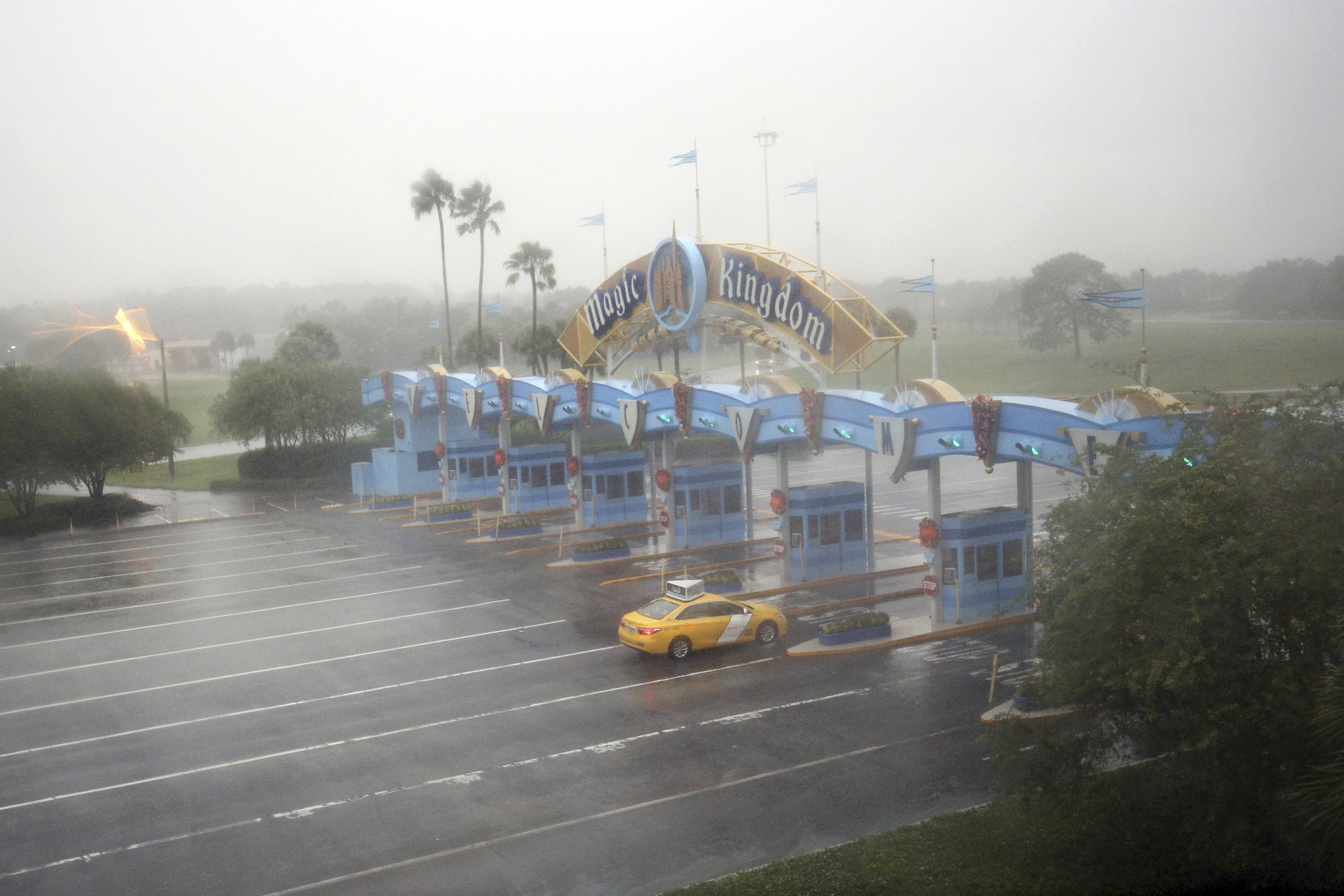 A lone taxi heads toward the Walt Disney World Resort area in Orlando, Florida, before the landfall of Hurricane Matthew, on October 6, 2016.
Gregg Newton—AFP/Getty Images 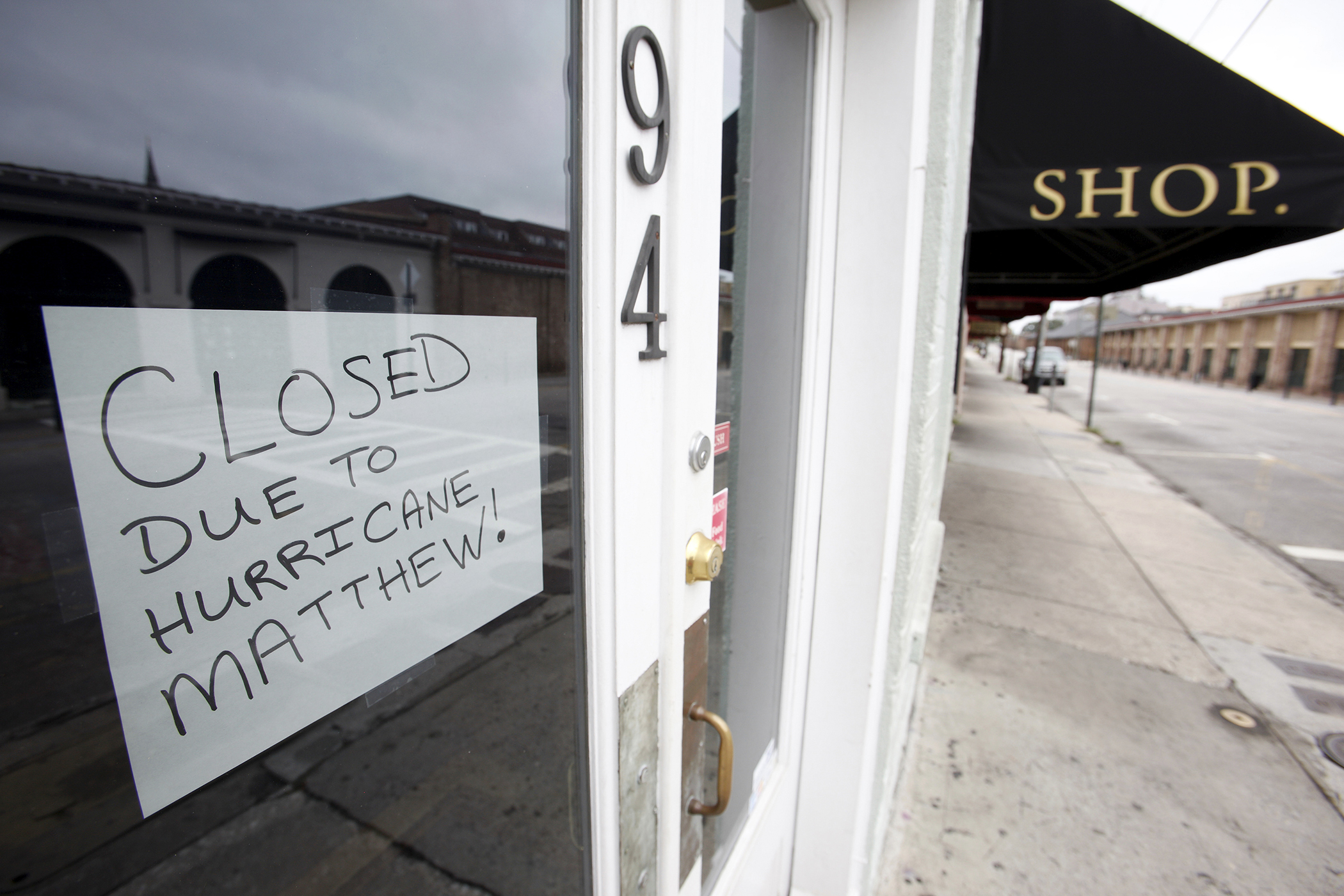 A sign in a shop window explains that they are closed due to the threat of Hurricane Matthew, in the mostly-empty historic district of Charleston, South Carolina on October 6, 2016.
Jonathan Drake—Reuters
❮
❯
1 of 15

Monday morning was a repeat of the previous Wednesday. We woke up obscenely early and made our way back to Charleston, largely successful in our goal of avoiding gridlock. (Gas and food charges: $65)

Unfortunately, the power was still out when we got home – so we rolled out the generator to get some lights running in the house and charge our electronics as we began clean up.

Fortunately, the house survived without any significant damage. But because the power was out for so long, one of the first jobs was tossing out all of the food in our refrigerator and freezers. We have multiple refrigerators, and all were well stocked, so let’s conservatively put the estimate of those losses at $1,000. (That number could be higher if some of the high-end beers I keep in one of the fridges in the garage go skunky due to substantial temperature fluctuations, but it’s too soon to determine if that has occurred.)

With no power (and the grill locked in the garage and inaccessible), we chose to eat out for lunch and dinner, adding another $74 to expenses. A trip to get some cleaning supplies added another $15 to the list.

Read Next: 12 Things Insurance Might Not Cover After Hurricane Matthew

Fortunately, since our house was largely spared from storm damage (and the power has come back on since I started writing this story), that’s unlikely to go much higher.

Some friends and neighbors have higher totals, though, as they had to rush out and buy generators (ranging anywhere from $299 to $650). Others didn’t have family nearby and ran up hotel bills well in excess of $800, with food, gas and other costs adding hundred, if not thousands, of dollars more to that total. (Some of those also came home to minor flood or wind damage, which will bump their overall costs up even further.)

In both my own case and those of my neighbors, the direct impact of Hurricane Matthew on our bank accounts may fall short of the numbers being discussed on national newscasts, but it’s still a bite that’s going to sting for some time.

Chris Morris is a freelance writer based in Charleston, S.C.