Remember the Ice Bucket Challenge? Here's What Happened to the Money 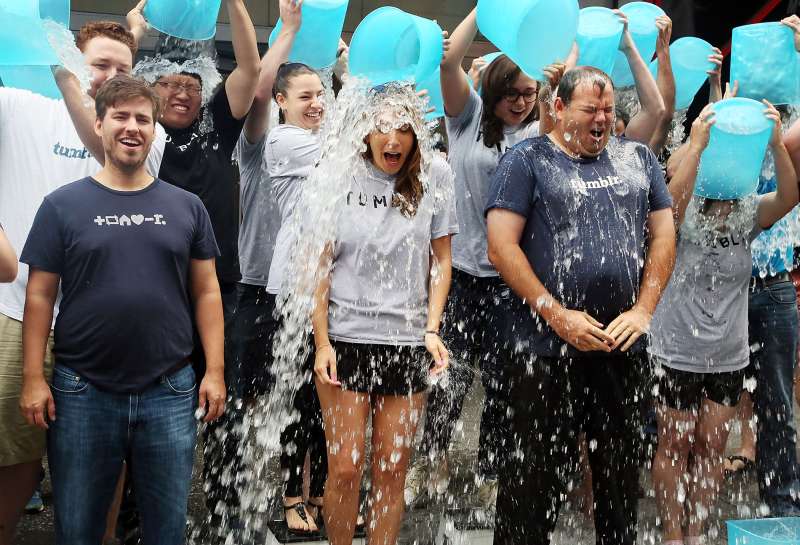 Ken Little, VP Engineering at Tumblr, Katherine Barna, Head of Communications at Tumblr, and Lee Brown, Head of Global Sales at Tumblr accept the ALS Ice Bucket Challenge during the ringing of the opening bell at the NASDAQ MarketSite on August 21, 2014 in New York City.
Astrid Stawiarz—Getty Images

One year ago, icy water inundated the Internet in what may have been the online equivalent of the largest chain letter ever—the ALS Ice Bucket Challenge. In endless autoplaying Facebook videos, people hoisted buckets filled with ice water, announced their philanthropic intentions, and upended the buckets over their heads. Breathless, they would nominate a few friends, demanding that they do the same upon penalty of a charitable donation to ALS.

The Ice Bucket Challenge was immensely successful—a break-the-Internet phenomenon that spread all the way up to President Obama. But with this barnstorming success came an undercurrent of critical skepticism. Were people actually following through with donations? Was the campaign saying it was better to be cold and wet than a charitable giver? Was the stunt overshadowing the actual disease? Was the whole thing actually raising meaningful awareness?

Twelve months down the road, here’s where things stand.

How much money did the campaign bring in?

According to the national chapter of the ALS Association (ALSA), the challenge brought in a staggering $115 million. Participants also donated an additional $13 million to the association’s regional branches. As you might expect, these kind of numbers were unheard of for the ALSA—the charity’s Form 990 filings show they brought in $23.5 million in 2013.

How much has been spent so far, and on what?

The ALSA reports it has spent around $47 million of the $115 million raised thus far, with two-thirds allocated toward research in five different areas: gene discovery, disease model development, identification of biomarkers, clinical trials, and drug development. Some 20% of the money has been spent on patient and community services; the remaining 11% has gone to education, fundraising, and processing fees.

According to Charity Navigator’s Acting COO Tim Gamory, the ALSA has been very forthcoming about its spending, which it put into an easy-to-read infographic as well as an exhaustive, detailed list. “We commend them for making information really transparent on their site,” he told Money in a phone interview.

Charity Navigator gives a firm no. While the intensity of the Ice Bucket Challenge had the trendy spike of a disaster-relief effort, Gamory notes that it’s important to remember there wasn’t actually a disaster that brought ALS to the public consciousness, but rather an independent viral sensation. “[The ALSA isn’t] a disaster organization; they’re trying to solve a problem that isn’t going to take a year or two,” he said. “It’s good to be thoughtful to determine the greatest impact.”

Since ALS is a disease with no known cure, the fight against ALS is largely focused on research. Eradication is more of a priority than palliative care, seeing as the disease is 100% fatal. In interviews with Charity Navigator, multiple chapters of the ALSA described spending plans of up to three years, because research often gets paid out over multiple years. And since one study frequently begets another, smart spending is even more important.

What concrete accomplishments can ALSA point to?

Direct patient and community services have produced most measurable results, since patient care is immediate and concrete. For example, the Palm Beach Post reported that the ALS Association Florida Chapter was able to hire a bilingual regional care manager.

Some progress has been made thanks partly to Ice Bucket Challenge research funding. Working with Ice Bucket money, researchers from Johns Hopkins University identified a protein that fails in the cells of most ALS patients, and showed that if they repair the protein, the damaged cell can heal.

“I remember reading a lot of stories about people complaining that the ice bucket challenge was a waste and that scientists weren’t using the money to do research,” said lead researcher Jonathan Ling in a Reddit AMA interview. “I assure you that this is absolutely false. All of your donations have been amazingly helpful and we have been working tirelessly to find a cure.”

It can takes years or even decades for researchers to find scientifically proven treatments, let alone cures for deadly diseases, so donors may have to be patient to see what other results the ALSA-funded research yields. As Gamory stressed, “The key is following up with them year after year to see how this money isn’t just spent but the outcomes from the spending.”

Lots of money was raised, but what about awareness?

During the campaign, various people raised concerns that participants were more more caught up in the viral sensation than the cause, giving less money than a typical donor and often without even knowing much about the disease. “Some people didn’t even know about ALS—it just became Ice Bucket Challenge,” said Gamory. “So it would be interesting to see data as far as what people actually know. I can tell you from our site, the searches for ALS went up a ridiculous amount, from around 500 to 68,000 in August. And then it went right back down.”

According to Gamory, there are two kind of donors, those who are deeply engaged in the cause, giving over many years, and those who respond to the social media wave. “As far as any longer term impact on those donor people who were exposed, it’s questionable,” said Gamory. “Many of the donors were flash-in-the-pan.”

Even if most donors don’t know what the letters “ALS” stand for or anything about the illness, it’s hard to look a $115 million gift horse in the mouth.