Why Candy Companies Hate the Way You're Shopping 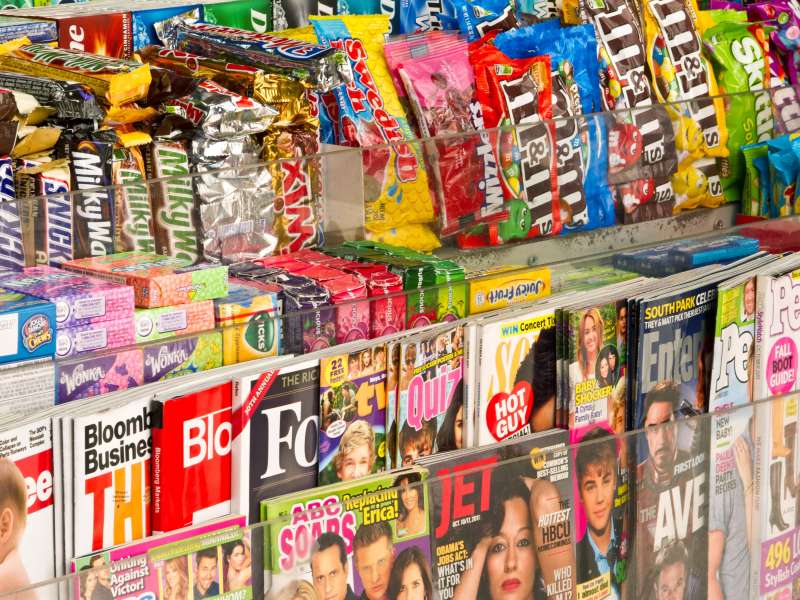 No one heads to the supermarket or drugstore with a shopping list that reads:

At least, we hope no one has ever created such a shopping list.

Regardless, those items are snatched up and purchased by many shoppers, typically because they’re tempted while waiting in the checkout area. As customers stand in line, surrounded by the goodies stocked in the vicinity of the cash registers, sometimes their rumbling stomachs and base curiosities get the better of them. The result: They drop a few bucks to satisfy a chocolate craving or read about the latest contrived Kardashian scandal, and the store wins some quick and easy profits.

But what if there were no opportunity for the store to tempt you into making such ill-advised impulse buys? Well, in fact, it’s getting harder for stores to nudge customers into making checkout impulse grabs, and tech is a big reason why.

While the advent of smartphones doesn’t eliminate the possibility of checkout impulse purchases, research indicates that our iPhones and Androids serve as “mobile blinders” that shield us from mindlessly eyeing the candy shelves and other checkout area temptations. In other words, because we’re checking email or Twitter or Instagram or playing some silly game on our phones, the odds are lower that we’ll buy, or even see, gum, chocolate, and the latest issue of Cosmo.

What’s more, online shopping, as well as the increasingly popular option of ordering groceries or other goods online and then picking up purchases curbside, all but negates any chance for the shopper to make an impulse buy. Another potential impulse purchase killer is self-checkout: Because shoppers are occupied with scanning their orders, they’re not thinking about how wonderful that chocolate bar in front of them would taste.

For obvious reasons, companies whose business relies on such impulse purchases aren’t happy about any of this, and at least one large candy company is doing something about it. Recently, the blog Retail Wire took note of some comments on the topic—and what’s known by insiders as “dwell time”—made by Chris Witham, a senior manager of front-end experience for Hershey, at an industry event.

“Anytime there is a pause in the shopping trip and shoppers take a look at some of the merchandising that is available, that is dwell time,” explained Witham. Obviously, retailers and companies like Hershey want shoppers to encounter some “dwell time” in order to maximize the odds that they will add an impulse purchase to their carts. Still, they don’t want shoppers to get annoyed by being forced to wait around forever. “As they get to pay points, how much is a good amount of dwell time [going] to encourage impulse purchase, but not have a detrimental effect on the shopping trip as a whole?”

Among the strategies Hershey is actively working on to counter the effects of technology and boost opportunities for impulse buys are adding on-demand chocolate dispensers to self-checkout areas, as well as candy and snack kiosks and vending to curbside pickup areas and perhaps near the pumps at gas stations. What’s clear is that candy companies aren’t simply going to give up on pushing impulse sales, no matter how technology changes the game.

“Impulse, in an indulgent business, is really important … But shopping is changing, and impulse is under threat,” said Frank Jimenez, Hershey’s senior director of retail evolution, according to The (UK) Guardian. “What happens if and when the checkout goes away?”

And what happens if the majority of shoppers turn into those described by the Wall Street Journal last fall:

There’s little to no chance a store can ensnare this kind of shopper in an impulse buy. It’s a good thing for stores, and for companies such as Hershey, that other research indicates that 9 out of 10 consumers buy things that aren’t on their shopping lists, and that millennials are most likely to make impulse buys not because they spotted a good deal or promotion but simply to pamper themselves.

Among the takeaways for shoppers who don’t want to be suckered into impulse purchases: 1) Shop with a list. 2) Stick to the list. 3) Keep your head down at the checkout area to avoid temptation. 4) Take advantage of online shopping and/or curbside pick-up services when they make sense.