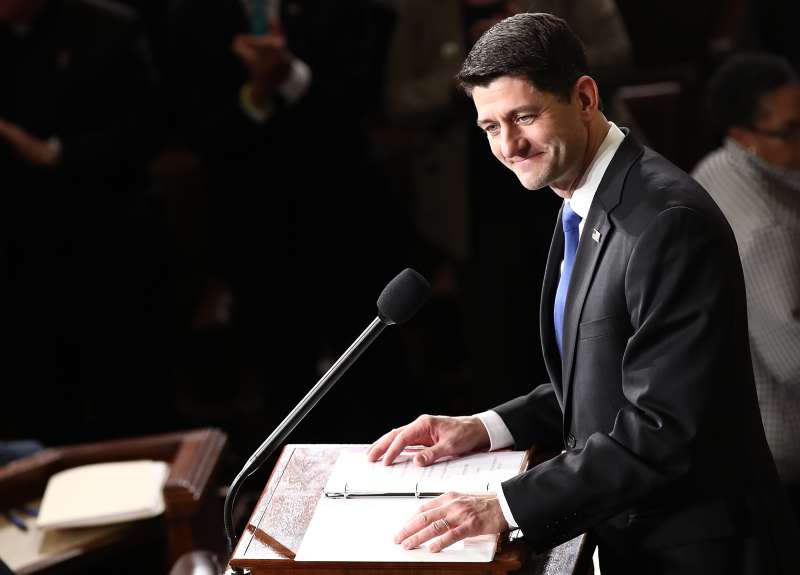 At long last, House Republicans have unveiled their replacement plan for the Affordable Care Act.

The bill drastically cuts tax credits for the oldest and poorest Americans, while giving the upper class a major tax break. It also rolls back the Medicaid expansion and nixes the individual mandate, which requires everyone to buy health insurance. Crucially, it has not been scored by the Congressional Budget Office, so overall impacts are tough to gauge at this early point.

House committees will begin work on the bill this week. In the meantime, here are five key things to know now:

1. Tax Credits Will Decrease Overall (But Especially for the Poor and Elderly)

As previously reported, the GOP plan provides significantly less financial support to those purchasing individual insurance plans through government-run exchanges. Under the ACA, tax credits were provided to 85% of people enrolled in the exchanges, and the amount of the subsidy was determined based on income level, geographic region, and age. The amount of the tax credit in the House bill is based exclusively on age: The older you are, the more you get per month (though still less than you would get under the ACA). The rationale is that older people have higher health care costs than the young, though of course this isn’t always the case.

While at first there was no income limit on the tax credits—every person who purchased individual coverage was set to receive a subsidy under a previous iteration of the bill—far-right outrage led the GOP to begin phasing out the credits at $75,000 for individuals and $150,000 for joint filers. After that, the credits decrease.

Here’s the age breakdown for enrollees below those income levels:

As we reported previously, a report from the non-profit Kaiser Family Foundation found that older Americans will receive significantly less help paying for their premiums (more on that below), as will the poorest young Americans. Americans earning $40,000 to $75,000, on the other hand, are the winners—their subsidies will increase, based on KFF’s projections.

2. Pre-Existing Conditions Will Be Grounds for Costlier Insurance Again

Under the ACA, insurers could not discriminate against people with pre-existing conditions like cancer, diabetes, or heart disease. The GOP plan does away with this popular component and institutes a continuous coverage provision.

Per the House bill, those with lapses in insurance cannot be denied coverage, as in previous iterations of the GOP plan. But they can be charged more, starting in 2019 (or 2018 for those gaining coverage during a special enrollment period). Enrollees cannot have gone 63 continuous days (or more) without coverage, or they would pay a 30% penalty on premiums.

Older consumers would pay more for coverage under the GOP plan. The oldest consumers on the individual market are 64, just shy of the Medicare eligibility age of 65, and under the Affordable Care Act they can be charged no more than 3 times what a 21-year-old would pay. The GOP plan would broaden the age bands, as these rate limits are called, to 5 to 1, allowing insurers to charge the oldest consumers five times more than younger ones. What’s more, the proposal would give the states the latitude to broaden those limits even further or to constrict them back to 3 to 1 or another level.

Moving to a 5-to-1 rating would increase monthly premiums for a silver plan in 2018 by 25% for a 64-year-old before tax credits, according to a research report conducted by Milliman on behalf of the AARP Public Policy Institute. (Meanwhile premiums would decrease by 25% for 21-year-olds.) “We do not want to go back to pre-ACA days when people couldn’t afford their premiums,” says David Certner, legislative counsel with AARP.

Older consumers would get hit with a double whammy: not only may their premiums increase, but the restructured tax credits won’t go as far as those under the Affordable Care Act in subsidizing the premium cost, Certner says. The new tax credits are based on age, not on income, while in reality many of the consumers on the individual market are lower income, according to the Kaiser Family Foundation: about two-thirds of all enrollees have incomes at or below 250% of the poverty line, or approximately $31,250 for a single person.

The new tax credits would also rise at a slower rate than under the Affordable Care Act, where credits were pegged to the cost of the second-lowest cost silver plan in the consumer’s region. That benchmark reflects the true market cost of the plan. The new peg, by contrast, is pegged only to a measure of inflation.

4. The Medicaid Expansion Will Be Phased Out

The GOP’s plan includes the phase out of the Medicaid expansion, despite pleas from Republican governors to keep it in place. About 10.7 million people were newly eligible for Medicaid coverage after the ACA went into effect, according to the Kaiser Family Foundation.

One of the only ways to pay for the GOP’s health subsidies and cut taxes the ACA imposed on the wealthy is to cut off federal Medicaid funding. States will be allowed to continue to enroll people into Medicaid until 2020. Then, it will “freeze,” and no other enrollees can be added, the thinking being people will eventually drop out of the program as they earn more money.

States that did not expand Medicaid will receive $2 billion in extra funding over five years.

The GOP proposal is unusual in that it hasn’t yet been scored by the Congressional Budget Office, the federal agency that calculates the impact that proposed legislation would have on the debt other considerations, AARP’s Certner says. “Clearly, there hasn’t been a great desire to share this information with the public,” he notes. The CBO report will likely come by the time the bill reaches the House’s budget committee. In the coming days, lawmakers in the Energy and Commerce Committee and the tax committee will work on the bill and then pass it along to the budget committee.

The bill will not likely proceed to the full House for a vote unless lawmakers are sure in advance that it will secure the needed 218 votes to pass, Certner says. If all proceeds smoothly, the full House could vote on the bill within two weeks, he projects. Then the bill would move on to the Senate, and if it passes there will likely get signed into law by President Donald Trump.