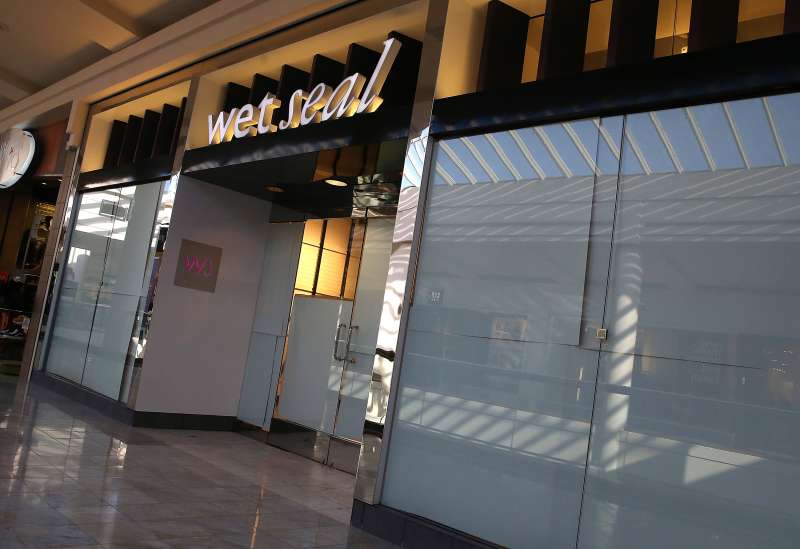 Expect to see more blank storefronts at your local mall—that is if you even go to the mall anymore. Teen clothier Wet Seal announced this week that it will close 338 stores after years of slow sales.

The once popular teen clothing store Delia’s filed for bankruptcy in December with plans to shut down entirely, and yet another apparel specialist targeting teens, Deb Stores, slid back into bankruptcy that same month. The struggles of youth-oriented retailers don’t stop there. Aeropostale lost $141.8 million in its most recent fiscal year and shut 120 stores last year. Rival Abercrombie & Fitch fared little better, while American Apparel has posted net losses of more than $300 million since 2010.

At the same time, sales are booming at shops like H&M, Zara, and Forever 21. The latter plans to double its number of stores in the next three years.

So what happened? Why are teens no longer shopping at the stores that were once the hallmark of “cool”?

Thanks to social media—in particular the popularity of searching “outfit of the day” or “OOTD” posts on Instagram—teens now can view hundreds of different products and looks to help them figure out what they want to buy and how to style it. They don’t need a store or brand to help dictate their look for them and aren’t relying on a single brand’s cachet. Instead, millennials favor individuality and shop accordingly. They’re less attached to brands and more willing to mix and match to create their own style, surveys by Nielsen, the Boston Consulting Group, and others have found.

Even Abercrombie, whose name and moose logo were signature design embellishments for every shirt, has realized this. A spokesperson acknowledged to Reuters: “They no longer want to be a walking billboard of a brand. Individualism is important to them, having their own sense of style.” To that end, Abercrombie has shrunk its well-known logo and increased the assortment of offerings in an attempt to better appeal to teens who don’t want to look like store mannequins (or each other).

Abercrombie isn’t the only company that has taken note and been busy “de-branding” designs, notes the Intelligence Group, which found in a study on millennials that they also favor more durable purchases, not flash trends, like classic dark plain denim jeans that can be worn for several years. Retailers that have been more successful with teens of late such as H&M and Forever 21 tend to focus more on selling clothes that seem brandless and still trendy, without prominent logos.

Stores like Zara, H&M, and Forever 21, which have much shorter waits between when clothing is ordered and when it goes on sale than traditional teen retailers, can roll out new clothing options each week, not each season, meaning they can quickly adopt trends from the catwalk and rapidly bring them to a sales floor. They can also better capitalize on cuts and patterns that are trending well with teens, giving them exactly what they want, faster than ever.

These “fast fashion” shops typically sell clothes at low prices—ideal when your clientele doesn’t have much money—and an ever-changing roster of products lures teens back into stores (or websites) again and again to see what’s new. It’s easy to see how this trend snowballs and hurts the competition, with teens having less time or inclination to look at other shops selling the same 14 sweaters they were a month ago.

3. Malls Are No Longer a Hangout

Remember Clueless, that movie that Iggy Azalea replicates in the “Fancy” music video? In it, privileged 1995 teen Cher’s default retreat is the mall. It’s where she goes to find comfort and break in her new clogs, and where a major popularity restructuring happens. Such a plot point wouldn’t be happening today, and I don’t just mean about the clogs.

Twenty years later, Cher’s counterpart’s default hangout could be at a fast-casual restaurant or at home in front of a screen of some sort. Basically, anywhere but the mall, which has seen a drop in foot traffic across all age groups, but among young people in particular. Strict “parental supervision” policies, like the one Ford City Mall announced this week, make it impossible for some teens to hang out at the mall even if they wanted to, with requirements that anyone under 18 be accompanied by a parent on Friday or Saturday evenings. Roughly 80 other malls have implemented similar policies, according to the International Council of Shopping Centers.

Add in the fact that in 1990, about 3 million retail jobs were held by 16-to-19-year-olds, vs. about 1 million today. When someone works at the mall, they’re more likely to shop there simply as a matter of convenience. Plus, isn’t part of the fun of going to a mall getting to annoy your working friend by unfolding all the shirts or pretending to be interested in smoothies so you can spy on your Jamba Juice crush?

Oh, and young people today are less likely to have driver’s licenses or own cars than prior generations, so it’s just plain more difficult for them to get to the mall. Assuming they wanted to go there, of course.

Clothing simply isn’t the top spending priority for teens it once was. In 2003, teens spent nearly 30% of their budgets on clothing. Nowadays, that figure has dropped to 21%. Of course, teens in 2003 didn’t have the newest iPhone 6 and its accompanying data plan to pay for or selfie sticks to buy. The best a 2003 teen could hope for was a pink Motorola Razr, if they got a cellphone at all. But the point is that today’s teens and millennials are likely to spend less on clothing and more on electronics and eating out at restaurants like Chipotle.

Skinny jeans? Flare? Colored? Forget them all. No teenage girl wants to buy new denim each season when she can slip on the modern uniform involving some variation of yoga pants, leggings, or upscale sweatpants. Sales of these “athleisure” offerings, embodied best by retailer Lululemon, have soared this past year as millennials swap their jeans for bottoms that can do double duty at the gym and school. Sales for activewear topped $35 billion last year and now make up 17% of the total clothing market, according to market-research company NPD Group.

With leggings offering greater wardrobe versatility at a lower cost than a typical pair of denim, teens just aren’t feeling the urge to buy those artfully ripped jeans in 10 different washes that still dominate the offerings from American Eagle Outfitters and Abercrombie & Fitch. And though AEO and Aeropostale have tried to break into the leisurewear market with new offerings, they’re having a hard battle for attention with established players likes Lululemon and Athleta.