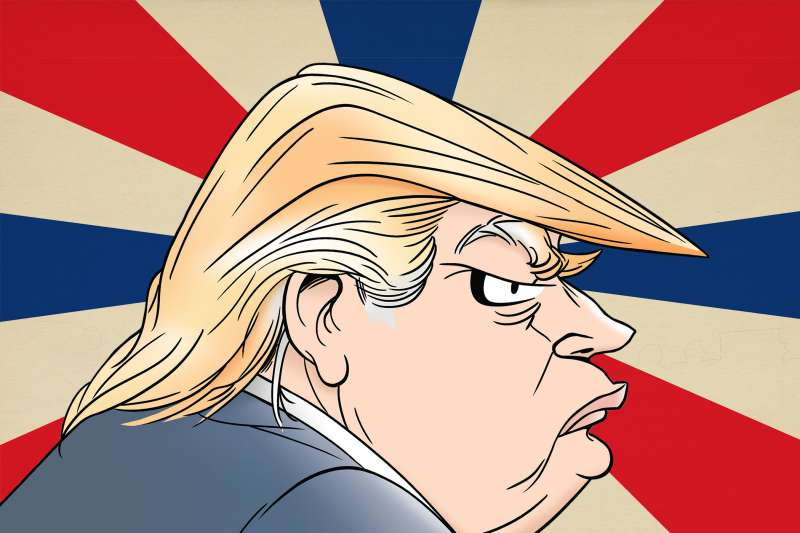 Americans who live outside the orbit of New York City’s gossipy tabloids may have first gotten to know Donald Trump as a two-dimensional figure, a character in the comic strip “Doonesbury.”

Since his debut there in 1987, the Republican presidential nominee has played a recurring role in the strip, providing enough material to fill cartoonist Garry Trudeau’s latest collection, Yuge! 30 Years of Doonesbury on Trump, published last month.

While the flesh-and-blood Trump may be a singular political phenomenon, the pen-and-ink version is part of a long line of cartoon characters who have run for president—a tradition that stretches all the way back to the election of 1908. He isn’t the only ‘toon in the race this year, either. Both Dr. Seuss’s Cat in the Hat and the Marvel Comics character Loki have declared, as well.

Here are 10 of the most colorful cartoon contenders over the years, along with their economic platforms (to the extent that they had one).

The smart-alecky lead singer of the Chipmunks, best known for their 1958 Christmas classic, “The Chipmunk Song,” threw his tiny hat into the ring with a 1960 single, “Alvin for President.” Fellow candidate John F. Kennedy, who would face off against Richard M. Nixon that fall, welcomed him into the race, remarking, “I’m glad to know that I have at least one worthy opponent.”

Dilbert’s villainous talking dog in the Scott Adams comic strip, Dogbert has made at least two runs for the presidency but devotes most of his energy to the business world, job hopping among occupations like CEO, management consultant, investment banker, and tech support specialist. A return to the political arena would not be surprising, though. As he confessed in one 1999 strip, “I need a job where my immense ego seems normal.”

Economic platform: “You want it! You got it!”

One of an assortment of Hanna-Barbara animated cartoon characters to enter the presidential fray in the 1960s (see Yogi Bear, later), Magilla Gorilla declared his candidacy in the election that pitted incumbent Lyndon Baines Johnson against challenger Barry Goldwater. Although he would lose to LBJ, his timing was smart: By the time of the next presidential election, in 1968, he was no longer on the air.

Occupation: Anything involving a get-rich-quick scheme

The taller half of the cartoon duo Mutt and Jeff, Mutt is believed to have the broken the glass ceiling for cartoon character presidential candidates in 1908—the first of several unsuccessful bids. His running mate was his new sidekick Jeff, whom he had met earlier that year in a mental institution. (Jeff was apparently genuinely mad, while Mutt was merely a dumbbell.) Though their strip ran in newspapers for 75 years, ending in 1983, Mutt and Jeff are probably best remembered today as a catchphrase for two pals of strikingly different heights.

Mad magazine’s perpetual cover boy made his first run for the presidency in December 1956, pitting himself against Dwight Eisenhower and Adlai Stevenson, as a write-in candidate. (He was a little late; the election happened in November.) Undeterred, he has returned repeatedly since. Among his campaign slogans: “You could do worse, you always have!”

Economic platform: Unknown (When asked by another character if he had any planks, he offered boards from his porch.)

Star of a sophisticated, Cold War-era newspaper strip bearing his name, Pogo was first put forward as a presidential candidate in 1952. His candidacy proved especially popular on college campuses, with Pogo for President rallies at Harvard, Cornell, MIT, Rice, UCLA, and at least a dozen other schools. Harvard’s rally got a bit out of hand—characterized in news accounts as “a bottle and beer can brawl with club-swinging police” that ended in the arrests of 28 students. Though Pogo would lose to Dwight Eisenhower that year, his name continued to be floated for higher office long after the demise of his comic in 1975. Today he may be best known for the saying, “We have met the enemy and he is us.”

Economic platform: “Pizza on every table,” “federal aid to surfing.”

While other “Peanuts” characters have also had a go at higher office (Charlie Brown, Lucy, and Linus, among them), Snoopy may have come closest with his 1968 bid—complete with an official theme song, “Snoopy for President,” by the Royal Guardsmen, the band that had previously celebrated his World War One flying ace heroics in “Snoopy vs. the Red Baron.” Though shot down this time, Snoopy would try again in 1972 and 1976. In 1980, as Ronald Reagan faced his own presidential race, the Republican candidate wrote cartoonist Charles Schulz, “Anything you can do to talk Snoopy out of running will be appreciated. How would he feel about a cabinet post?”

The comic-book heroine Wonder Woman may have enjoyed her greatest political triumph in the 1972 election, when the new feminist magazine Ms. featured her on its cover under the banner “Wonder Woman for President.” But she was not a total stranger to presidential politics. A 1943 issue of her comic, published during the 1944 race, showed her under a similar banner—though with the disappointing disclaimer that the story was set 1,000 years in the future.

Economic platform: “Whatever our opponents may promise, we promise you more!”

In a friendly rivalry with his fellow Hanna-Barbara cartoon star Magilla Gorilla, Yogi Bear also made a bid for the 1964 election. His running mate, Huckleberry Hound, had attempted his own, unsuccessful run at the presidency in 1960.

Economic platform: Unknown, if any

A 1970s underground comics star gone mainstream, Bill Griffith’s Zippy, sometimes known as Zippy the Pinhead, seems to have made his first bid for higher office in 1980, the year Ronald Reagan won his initial term. Zippy’s nonsensical statements, while not uncommon for politicians, offer little clue to his ideology—although he is on record as saying, “All life is a blur of Republicans and meat.” Zippy is perhaps best known for his question, “Are we having fun yet?”