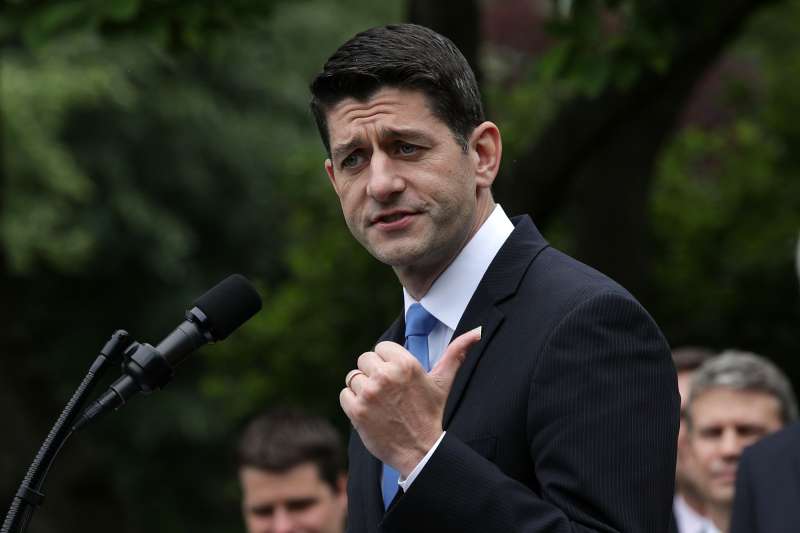 Speaker of the House Rep. Paul Ryan (R-WI) speaks during a Rose Garden event May 4, 2017 at the White House in Washington, DC. The House has passed the American Health Care Act that will replace the Obama era's Affordable Healthcare Act with a vote of 217-213.
Alex Wong—Getty Images

The Republican bill to repeal and replace Obamacare narrowly passed the House of Representatives on Thursday, advancing a plan that would gut health coverage for millions of Americans while delivering tax cuts to the rich.

The American Health Care Act, as the bill is called, had been tweaked in several ways since it was pulled from a House vote in March after failing to garner enough support. In making changes, Republican leaders tried to appease both hardline conservatives who thought the previous version was too much like Obamacare (aka, the Affordable Care Act or ACA) and moderates who worried about people losing coverage.

But the nonpartisan Congressional Budget Office (CBO) has not yet scored the revised bill, so lawmakers voted without key projections on how the legislation would affect the number of insured, premium costs, the federal budget, and other measures. The last CBO score—delivered in response to the prior iteration of the bill—estimated that the legislation would increase the number of uninsured people overall by 24 million by 2026.

Proponents, including House Speaker Paul Ryan, say the bill will restore choice to consumers and lower premiums that spiraled out of control under Obamacare. But critics counter that the bill’s effects on premiums would vary greatly based on an individual’s situation, and that weakened consumer protections could ultimately hurt everyone, including those with employer coverage.

Generally speaking, younger, healthy people would likely see their premiums decline under the Obamacare replacement, while older and less healthy people would see them rise. Young people can continue to remain on their parents’ health insurance until age 26. Yet people will no longer be forced to pay a penalty if they go without health insurance for more than a short stretch—the bill does away with Obamacare’s “individual mandate,” but includes other incentives for people to maintain their coverage.

Here’s what you need to know about the bill, which continues next to the Senate. There, it faces new challenges and likely revisions before any vote. If it passes the Senate, President Donald Trump is expected to sign the bill into law.

Obamacare created a list of 10 essential health benefits that health plans must offer, including maternity care and mental health care, which were routinely excluded from pre-Obamacare policies on the individual market. The amended American Health Care Act would allow states to apply for a waiver to define their own essential health benefits starting in 2020. There are several concerns with this approach. One is that insurance carriers would likely decline to offer costly benefits if they’re not required to, Linda Blumberg and John Holahan of the Urban Institute write in a recent report. Or if they do, they’ll offer them at such a high price that coverage will be unaffordable for most consumers.

Another concern is that, without essential health benefits, coverage for pre-existing conditions becomes meaningless. Obamacare detractors, including President Trump, are quick to say they want to retain coverage for pre-existing conditions. But if you have cancer and your policy doesn’t cover chemotherapy—because it no longer has to offer comprehensive benefits—then practically speaking, you’re not covered even though you can technically buy a policy.

What’s more, weakening of essential health benefits could also affect people with health coverage through their jobs, experts say. Obamacare required all health insurance plans, including those provided through an employer, to have an out-of-pocket maximum limiting the amount that the patient would have to pay in a given year. But that ceiling only applies to benefits that are considered essential health benefits. Under the GOP bill, employers could choose any state’s definition of essential health benefits, and those seeking to lower costs could gravitate toward the skimpier ones. This would leave workers vulnerable to catastrophic expenses if they get a serious injury or health diagnosis.

2. Medicaid Would be Cut

The American Health Care Act would radically change Medicaid, by phasing out the Obamacare Medicaid expansion that extended health coverage to more than 10 million lower-income Americans.

States would be allowed to continue to enroll people into the expanded Medicaid program until 2020. Then, it will “freeze,” and no other enrollees can be added, the thinking being people would eventually drop out of the program as they earn more money.

Beyond that, the bill would restructure all of Medicaid, not just the parts that Obamacare touched. The American Health Care Act would slash federal Medicaid spending by about $840 billion over 10 years, according to CBO projections. This would likely lead to benefit cuts for the 74 million Americans who rely on the program, including lower-income beneficiaries, as well as, the disabled and elderly people who have exhausted their assets.

These cuts to Medicaid would help fund that tax cuts that the bill grants to wealthy Americans. Obamacare levied certain taxes on the wealthy to help fund the premium subsidies that help make insurance more affordable for the 85% of the people on the individual marketplace who receive them. Yet the American Health Care Act rolls back the tax increases, and cuts to Medicaid will help to make up some of that lost revenue.

After initially promising to protect people with pre-existing conditions from exorbitant premiums and deductibles, the House plan would allow insurers to once again charge sick people more for coverage under certain circumstances.

Insurers still cannot deny coverage outright to people with pre-existing conditions, as they could before the passage of the ACA. However, they will be able to charge significantly higher premiums once again if individuals do not maintain continuous coverage. States can apply for a waiver to the ACA’s community rating provision, which banned charging sick people in a community more for insurance than “healthier” people in the community (with exceptions for age and tobacco usage). In order to receive the waiver, states would receive money from the Patient and State Stability Fund to create things like high-risk pools.

These high-risk pools are intended to help bring down costs for sick people, but a recent report from the AARP found that premiums could exceed $25,000 per year for people in these pools, pricing many people out. The AHCA has $138 billion over ten years earmarked for the pools, which is not nearly enough to help subsidize costs, according to experts, even with an additional $8 billion that was added to the pot at the last minute.

4. Tax Credits Would Decrease for Most People

Tax credits to pay for individual coverage varied based primarily on income, as well as age and geographical region, under Obamacare, and 85% of enrollees receive help paying for coverage. In the AHCA, subsides depend almost exclusively on age, with all individuals in a certain age range receiving the same amount of support. The credits are phased out for the highest earners: they start decreasing when an individual earns $75,000, or $150,000 for joint filers.

Overall, the AHCA dramatically reduces the amount of money people will receive to help pay for their insurance, excepting the youngest, healthiest enrollees. This is the age breakdown for subsidies:

Compared to the ACA’s credits, this structure benefits young healthy people, while hurting older people as well as sick young people. Lower-income older people would be hit particularly hard, as the fixed dollar subsidy won’t go as far in covering their costs as the income-based one. In 2026, a 64-year-old making $26,500 would owe a sizable $19,500 in annual premiums under Ryan’s plan, versus $15,300 under Obamacare, according to CBO projections. Meanwhile, the difference in subsidies would mean that the consumer pays just $1,700 out-of-pocket for premiums under Obamacare, versus $14,600 under the American Health Care Act.

Though not explicitly stated, the AHCA aims to defund Planned Parenthood, the largest network provider of women’s health care in the country, by denying reimbursements from Medicaid and Title X (a federal program for family planning) funding for preventative and primary care. That could lead to as many as 650,000 women losing access to preventive care.

The waivers for pre-existing conditions and essential health benefits would also disproportionately affect women: things like maternity and newborn care could be on the chopping block, as well as birth control coverage. Other services that are currently considered preventive care that could change if essential health benefits are rejiggered include breast pumps, domestic violence screening and counseling, mammograms, newborn care, screenings for cervical cancer, STI counseling and well-woman visits. A recent study from the Kaiser Family Foundation found that because of increased birth control coverage, out-of-pocket prescription costs are actually on the decline—and that too would be reversed.

At the same time, sexual assault, domestic violence, pregnancy, C-section, postpartum depression, and eating disorders are all conditions affecting significantly more women than men (though not exclusively women), that could be considered pre-existing conditions once again.

The bill could put domestic violence victims at even more risk. As Money reported previously,

Finally, women also make up the majority of Medicaid recipients, and nearly half of all births are covered by Medicaid.