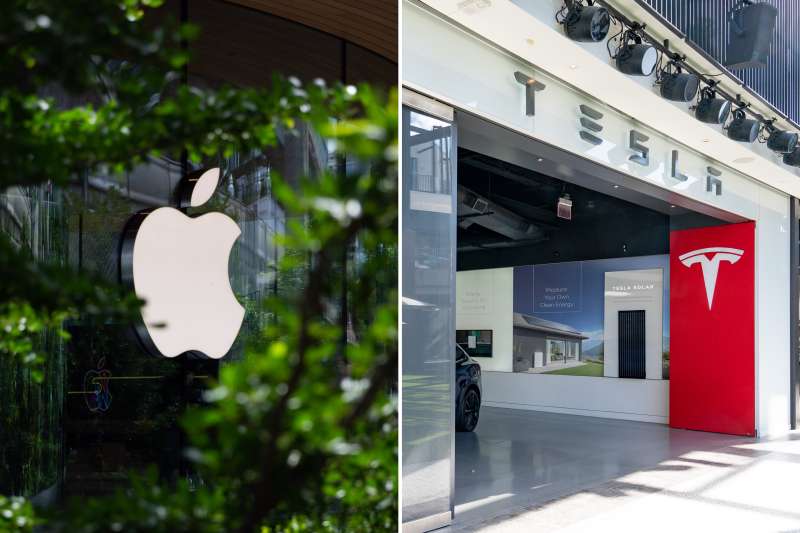 Stock splits — when a company boosts its number of shares, lowering the per-share price of its stock — have gotten rarer in recent years. But since Apple and Tesla announced they both plan splits later this month, experts say more companies may follow.

“In the last two to five years, it’s been kind of a status symbol to have a high stock price but now that’s unwinding,” says stocks splits expert Neil Macneale, author of the 24-year-old 2 for 1 stock split newsletter. “We might be starting a new trend.”

Stock splits are essentially an accounting move, albeit one that can make a stock more appealing to investors, at least according to proponents. During a split a company typically divides its share count in two, or three or four, leaving each investor with more shares.

So if you own one share of a stock that trades at $100, after a 2-for1 stock split you would two shares that trade at $50 each. The exercise does not affect a company’s business prospects or, in theory, its overall market value.

Splits were popular in the late ‘90s when there were nearly 100 per year among S&P 500 companies, according to Nasdaq. This was in large part because brokers charged higher commissions for investors who couldn’t buy in increments of 100 shares, known as round lots. “If you called a broker to buy just 25 shares, you could end up paying 2% to 3%, but if you bought more than 100, that would drop to 1% or less,” recalls Macneale.

Companies frequently split shares when the price exceeded $100 per share, so investors with less than $10,000 could still easily own the stock, says Macneale.

The practice fell out of favor after the dot-com bust, dwindling to just a few per year in recent years, in part because of innovations like fractional shares, which allow investors to buy less than a single share of stock, and zero commission stock trades.

Still, stock splits remain one way for company boards of directors to signal to investors they believe a share’s price is likely to rise in the future, according to experts. In the case of Apple and Tesla, it may also be part of a marketing strategy targeting millennial and other retail investors among whom they appear to have something close to cult followings.

Apple’s “board wouldn’t have done a split if they thought their price would go down in the coming year or two,” Macneal adds. “But doing this now seems more like good public relations and it comes as the new iPhone is set to be released [referring to Apple’s iPhone 12 running on 5G]. It’s a way to keep their name in front of the public.”

Even as fractional trading becomes more popular both companies’ shares boast lofty prices for small investors, with Tesla currently trading at $2,153 and Apple just over $500.

Tesla’s colorful founder and chief executive Elon Musk, now the world’s fourth-richest person (thanks in part to the electric car maker’s 50% gain after announcing the split August 11), has also boasted about wanting customers and society at large to be able to afford Tesla’ stock, tweeting that ‘it’s too expensive, imo.”

In announcing its five-for-one split (which will take place August 31 for investors that owned the stock as of August 21), the firm stressed the exercise was aimed at making “stock ownership more accessible to employees and investors.”

Apple, which plans a four-for-one split, also on August 31, may also enjoy benefits from making it easier for customers to own its shares, analysts say.

“There is a certain investor mindset to buy what you know so if you are a consumer of Apple, you feel more linked to its prospects if you own its shares,” says Todd Rosenbluth, senior director of ETF and mutual fund research at CFRA. “A lower stock price makes that easier to do.”

Can they beat the market?

Macneale and other market watchers have speculated that Amazon (at nearly $3,300 a pop) could be the next expensive stock to announce a split, followed by Google parent Alphabet ($1,625) or other high-flying Silicon Valley names such as Facebook, Zoom or Netflix. But whether these companies decide to divide their shares to also enable a larger pool of investors to own their stock is anyone’s guess.

“The fact that Apple and Tesla have gone even higher after announcing their splits might encourage others to choose to do this,” Rosenbluth says. “If management decides raising the stock price is a priority, it’s hard to see how this may not become a trend.”

The right stockbroker is a powerful asset when investing your hard-earned money.
Take the stress out of managing your portfolio with Stash. Online Stock Brokers are ready to help you now. Click below and get the ball rolling TODAY.
Start Investing

Warren Buffett Just Bet Big On Gold Miners. Should You?

This Bond Market Indicator Suggests Inflation Could Be Coming. Here’s How to Protect Your Investments

(An earlier version of this story misspelled Neil Macneale’s name.)