The Best Immersion Blenders for Your Money, According to Food Bloggers 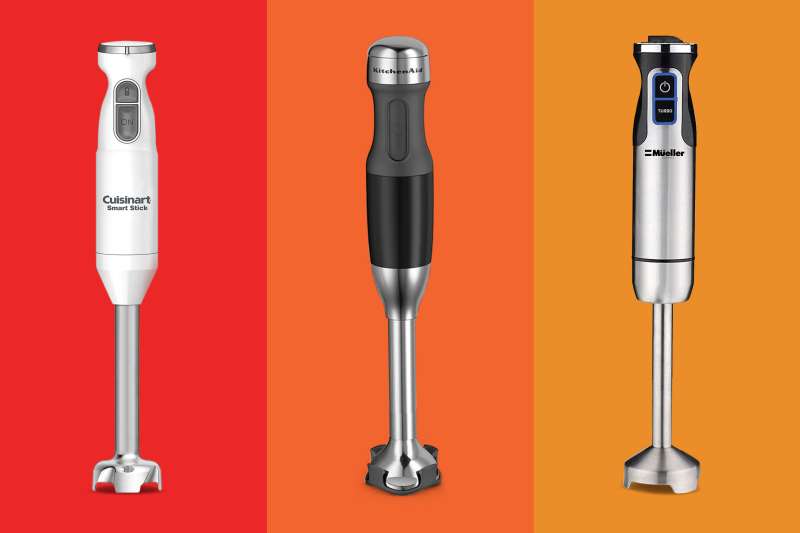 Traditional blenders are great for making margaritas and smoothies. What about immersion blenders? Well, depending on how much cooking you do and what you like to make, an immersion blender, also known as a stick blender or hand blender, could also be a terrific tool to have in your kitchen.

Immersion blenders typically aren’t as strong as regular blenders, but they offer the home chef more finesse — which comes in handy if you want to whip or puree something. For example, if you put the ingredients for salsa in a regular blender, you’d likely produce some sort of tomato-onion smoothie rather than a thick and chunky sauce you can dip a chip in.

Michael Murdy, the Spokane-based founder of the online foodie resource Robust Kitchen, likes immersion blenders “because they have way more control over texture and thickness. With a traditional blender, you run the risk of over-blending foods like salsas, pancake batters, and purées,” he says. “It can happen in the blink of an eye.”

Fixing up a delicious and healthy meal doesn't have to be time-consuming.
With HelloFresh you can get chef-quality meals delivered right to your door. Click your state to learn more!
Get Meals Delivered to My Door

Immersion blenders have much smaller blades and motors, so they’re best for smaller and more controlled blending jobs in the kitchen. They’re also easy to clean — a quick rinse under the sink often does the trick, and some models are dishwasher-safe. “If you don’t have to bring out the blender, why would you?” Murdy says. “Although I would not recommend an immersion blender for blending ice or frozen fruit.”

Fall will be here before you know it, and nothing warms you up like a hearty homemade soup. So if you’re interested in getting your puree on, here are the best immersion blenders, according to recommendations from health experts and food bloggers.

If you lovely pesto but don’t have the time to grind garlic, cheese and pine nuts by hand, then Elliott Reimers, Certified Nutrition Coach at Rave Reviews, recommends the Cuisinart Smart Stick Variable Speed Hand Blender “for its ease of use and simplicity for cleaning and storage. Should you have a hankering for homemade pesto, hook up the motor to the chopper/grinder attachment for a quick, delicious pesto you can claim as your own,” he says. “This immersion blender is great for busy professionals on the go who like to eat well but don’t want to spend too much time in the kitchen.”

“Mueller is an Austrian based company that does the majority of their marketing on Amazon,” says Murdy. “This model sells for approximately $35 and yet has many of the features most of the $50 immersion blenders have, including 9 motor speeds, a powerful 500 watt motor, and an egg whisk and milk brother attachment. Most importantly, customers like this model, and continue to rave about it years after it’s been bought.”

Another benefit of this model, according to Reimers, is that it can make your mornings feel extra fancy. “The Mueller immersion blender is an economical option for those who enjoy cooking at home and curating a luxurious coffee drink,” he says. “An egg whisk for whip cream and beating eggs is included, as well as the milk frother and blender, perfect for making clean-eating peanut butter, salsa, soups, and purees.”

People who get really into their immersion blenders will use them daily. If that sounds like you, keep in mind that KOIOS “offers a two-year warranty, which is difficult to find because people are notorious for pushing these blenders to their limits. It also comes with a whisk attachment, a 500mL chopping attachment, and a 600 mL mixing beaker,” says Murdy, who adds “I don’t think there’s another immersion blender available that has a higher motor output.”

One of the downsides to immersion blenders is that they can be hard to use if you have joint pain or other issues with your hands. But there’s no reason to let something like arthritis get in the way of your salsa needs.

Amber Adams, a Kansas City, Missouri-based food blogger and founder of KitchensReady.com, says people with wrist issues should look to the Braun MultiQuick 5 Immersion Hand Blender. “This particular blender is my favorite because it’s lightweight and ergonomic enough for most people to use even if they don’t have a strong grip or if they have joint and wrist issues,” she says. “In addition, this is one of the only blenders that come with the plastic masher attachment. A plastic attachment is nice to use on surfaces that might get scratched easily like dutch ovens.”

Also, “while many immersion blenders claim to offer some sort of splash-control to minimize the mess, this particular model’s SplashControl design seems to perform better than most models.”

Many immersion blenders aren’t well-equipped to make smoothies as they’re not strong enough to crush ice. But if you spend more you get more, and the KitchenAid 5-Speed model is worth the price, according to Glen Wilde, the New Zealand-based CEO & founder of the online wellness resource Diet to Success.

He recommends it for “smoothly blended protein shakes, simple soft fruit smoothies and shakes, and creamy soups. This is a great tool to utilize when you want to provide a quick blend without all the mess and cleanup of a conventional blender.” He adds that cleanup is a breeze because “it comes with a storage case for all of the parts and blades so you’re never left wondering where you misplaced anything. You can use the provided blending pitcher or blend in your own container.”

Get your meals delivered without leaving the comfort of your own home.
Get exquisite meals, made from scratch and using fresh ingredients delivered to your door.
Deliver Meals to My Door

The Best Blenders for Making Smoothies, Margaritas, and More

The Best Online Grocery Delivery Services for Your Money: A Comprehensive Guide to Fees, Prices and Availability

The Absolute Best Vacuum Cleaners for Your Money