Barack Obama, Martha Stewart, and Diplo Have LinkedIn Profiles. I Went on a Quest to Find Out Why 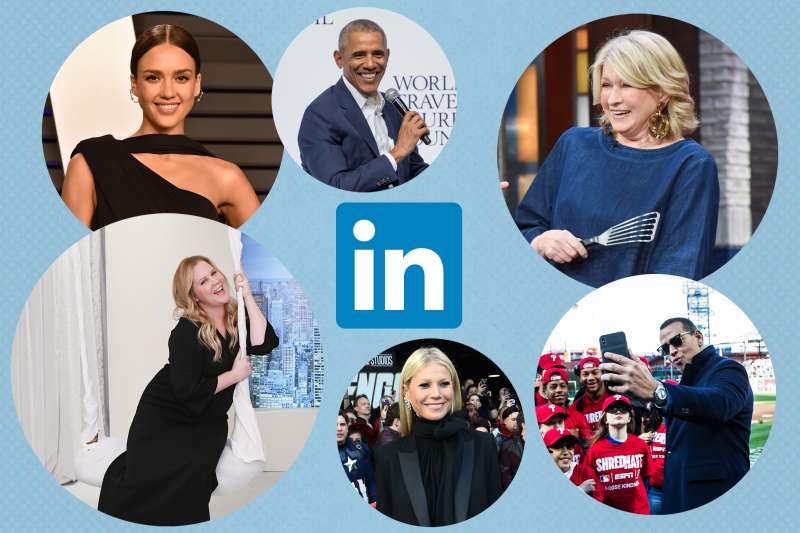 Stars — they’re just like us. They eat cheeseburgers, they pay parking meters, and some of them are even on LinkedIn.

That’s right. Along with your annoying former classmates, ex-boyfriends and dad, people like Martha Stewart and Barack Obama are on LinkedIn. And, as someone who spends a not-insignificant amount of time on the social networking site, I want to know why.

I’ve recently become obsessed with famous people’s profiles. I don’t know about you, but I use LinkedIn for job-related activities like sharing my articles, looking for sources, obsessing over whether my profile picture looks professional enough and sending my friends stupid auto-generated InMail messages. There’s no way Obama is doing any of that.

So what is he doing? Is he, like me, dodging connection requests from PR people? Is it a gag? Part of a sponsorship thing?

I set out to uncover what the deal is with celebrity LinkedIns. Here’s what I found.

If you’re ever bored at work, I highly recommend going down the celebrity LinkedIn rabbit hole. All you have to do is type a star’s name into the search bar, go to his or her page and start reading. When you’re done, head to the “People Also Viewed” sidebar on the right, choose another famous name, and click. Repeat until your shift is over.

Sure, some of the profiles are fake, but others seem pretty darn real. Regardless of authenticity, profiles purportedly belonging to famous people are chock-full of gems, like the fact rapper Gucci Mane lists knowing English under his accomplishments. New England Patriots player Julian Edelman mentions how much he likes burgers in his bio. Singer Ariana Grande puts Microsoft Office as a skill.

The deeper you dig, the better it gets.

One of Jessica Alba‘s interests is Target (which, yeah, same). TV host Steve Harvey wrote that he attended the “School of Life.” Lil Wayne, or some enterprising individual with the URL www.linkedin.com/in/lilwayne, says his job since 1982 is “Greatest Rapper Alive.” What are the duties that come with that? Oh, you know — “getting that paper,” “laying down phat beats” and “sippin’.”

Some Stars Are Actually on LinkedIn

According to Dan Roth, the editor-in-chief of LinkedIn, many profiles in celebrities’ names are legit. In some cases, LinkedIn has reached out to them to officially establish a partnership, but in others, the stars simply decided they wanted to sign up.

“We all have to carve out our own career paths now; that is as true for celebrities as it is for anyone else,” he says. “Smart celebrities realize they have to be thinking about what their next play is.”

LinkedIn can help celebrities showcase their interests, just like it does for normal people, Roth says. If you were interested in getting a job in a new field, for example, you’d probably start connecting with people who worked in that industry, commenting on relevant news stories and following professional organizations. The same can go for a celebrity looking for new opportunities — for example, an athlete making plans in case of injury, or a philanthropist looking for a new cause.

LinkedIn also runs an influencer program. There are about 500 participants right now; you can identify them by the blue or gold “in” badge on their profiles.

That badge indicates that they’re active, because LinkedIn will take it away if they don’t post often enough. For example, Karlie Kloss, who posted an article in May 2018, has one. Gwen Stefani, whose last link share was in 2016, does not.

“We’re doing it because we believe that these people have something really powerful to give back,” Roth says. “If they’re no longer giving back … then the badge shouldn’t be there.”

Roth says he likes to focus on posts, not profiles, because they contain valuable insight from the experts. These pull-back-the-curtain sort of updates “are incredible ways for celebrities to show that what they’re doing is real life,” says Roth, who hosts a video interview series that highlights influencers like Jennifer Lopez.

It’s also good for their own brand, given that LinkedIn has 610 million members around the world. Celebrities can’t pass up that audience or chance for engagement. For example, Mark Cuban and Richard Branson both regularly share, like and comment on posts.

They also can’t ignore the one other major benefit of the site: “The comments tend to be respectful because people are in the business mindset when they’re here,” Roth says. “There’s no flaming, very little trolling on LinkedIn.”

This is pretty obviously not Tiger Woods, unless he has changed his entire face since the last time I saw him.

It’s doubtful this is Anne Hathaway, given that she lists her job as SEO executive and not Princess of Genovia.

And as much as I want to believe this profile is actually Beyoncé, I feel like she probably wouldn’t describe herself as “most awarded human alive.”

LinkedIn is littered with fake celebrity accounts, as Digiday pointed out in April. LinkedIn wrote in 2018 that the company uses “utilize a variety of automated techniques, coupled with human reviewers and member reporting, to keep our members safe from all types of bad actors and abuse,” but there’s clearly still work to do. (Side note: Want to know how to recognize a fake LinkedIn profile? If there’s no photo, bad grammar or suspicious info, you should probably tread carefully.)

In my research, though, I also uncovered another kind of poser.

Everyone from R.L. Stine to Chrissy Teigen has tweeted about LinkedIn’s overzealous email system, but few appear to truly have profiles on the site. Case in point: Actor Zach Braff tweeted in 2012 about how much he hates Linkedin invitations, but nobody even pretending to be him comes up in my search results.

Of course, he and Stine and Teigen could have deleted their profiles (or they could exist in a secret part of the site). But my conclusion is that while some stars see LinkedIn as serious business, others just think it’s a punchline.

They Don’t Want to Talk (to Me) About It

As far as real LinkedIn users go, getting celebrities to discuss LinkedIn proved difficult. I guess they’re busy or something?

Oprah Winfrey declined to comment, but at least her people emailed me back. (Dozens of other publicists did not. Perhaps I should have InMailed them.)

Goop queen Gwyneth Paltrow’s spokeswoman told me Paltrow herself couldn’t talk but she — the spokeswoman — could answer questions. So I learned that Paltrow does personally log in and post on her LinkedIn, though she only uses it “sparingly.” When asked whether Paltrow sees LinkedIn as an important social network, the spokeswoman said “yes,” adding that “we have a strong presence on LinkedIn for goop.” Huh!

The most interesting response was from Diplo’s publicist, who said his profile was “primarily tongue-in-cheek.” Makes sense, because the DJ lists himself as having been the “admiral” at his record label Mad Decent for the past 118 years and 5 months.

They may not have commented to Money, but certain celebrities have spoken about LinkedIn before. In 2013, talk show host Conan O’Brien decided he wanted to become the site’s most-followed user, declaring that “I will not rest until I become the number one personality, or ‘Influencer,’ as you call it, on the site.” No word on whether he achieved that lofty goal.

And You Can Try to Connect, But…

OK, here’s what you really want to know: Can you connect with a celebrity on LinkedIn?

The answer is that you can try.

For most people, like baseball player Alex Rodriguez, you can just click “Connect” and it’ll let you do so — albeit with a recommendation that you pen a note to “remind people who you are and explain why you want to connect.” But for some, like Whitney Port, you have to enter their email address to verify that you actually know them.

However, as part of this investigation, I ignored most of that and randomly started trying to connect with celebrities. I sent requests to B.J. Novak, Misha Collins, Issa Rae, Jeb Bush, Martha Stewart, Amy Schumer and Sarah Michelle Gellar.

None have accepted yet, but I’ll keep you posted. Check my LinkedIn page for updates.