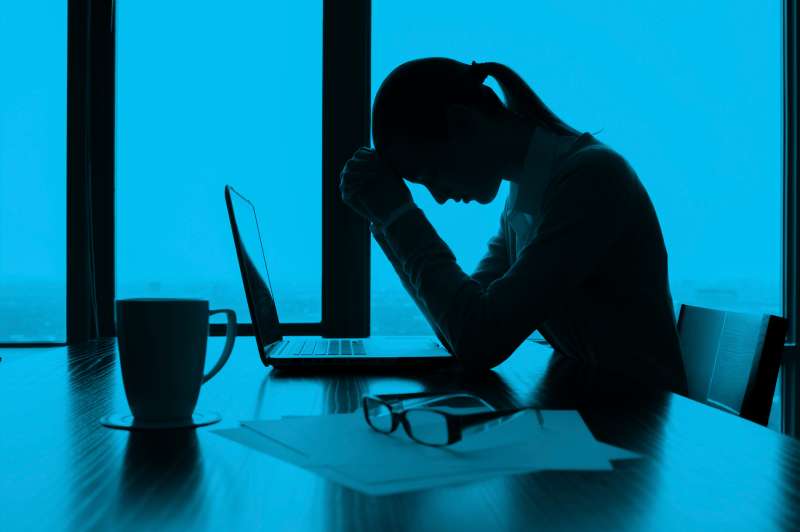 The recent sad news that a young Apple employee was found dead of a self-inflicted gunshot wound at the company’s headquarters raises an important, if troubling, question: Would you know what to do if you suspected a coworker might be dangerously depressed?

Of course, if there is the threat of violence to themselves or others, calling 911 or contacting company security is the way to go—you shouldn’t put yourself in danger. But before a troubled person reaches that breaking point, mental health experts say they often tip their hand, indicating in ways that seem clear in hindsight that they were wrestling with depression.

Many of us see our coworkers more hours in a week than we see our own family members, which means we are in a unique position to detect a shift in a colleague’s mental state.

“It’s always a difficult issue, yet most coworkers can tell if something seems wrong or off in a colleague’s demeanor,” said Douglas LaBier, a business psychologist and the director of the Center for Progressive Development in Washington, D.C.

Read next: Kelly, Michael, and the Art of Resolving Coworker Conflicts

While saying things like they want to die, feel completely alone, or have nobody who cares about them are obvious indications of a troubled mental state, most people who struggle with depression in the workplace express their distress more subtly than that, noted Edward Yost, a human resources executive with the Society for Human Resource Management. More general feelings of being helpless or trapped, especially if expressed frequently, are more likely to be the kind of comments a coworker might express to another, he said.

Two hallmarks of depression that go hand in hand are isolation and withdrawal, said Gary Namie, director of the Workplace Bullying Institute. The isolation may be self-imposed or may be a result of being shut out of workplace cliques.

People who are depressed may withdraw from others and distance themselves from social interaction, Namie said, and because many people with depression are good at masking their feelings of self-negativity, a colleague may brush off a sudden disappearance from team lunches or department happy hours by blaming an increased workload or other job-related obligations.

Read next: Can My Employer Ask Me to Change My Personality?

For a conscientious coworker, those claims should be carefully considered, because there are two possibilities here, neither of which is great news from a mental health perspective. The first is that he or she is using work as an excuse to pull away from others. The second is that the person actually is overloaded with work all the time.

“Many become depressed and demoralized not just by personal issues outside of work, but by the management culture at work,” LaBier said. Whether the reason is a conflict with the boss or other management, no opportunity for advancement, or a sense of stagnation, “Feelings of being stuck and trapped result—which will cause emotional problems,” he said.

Namie added that work cultures that prize long hours at the expense of workers’ personal lives and even their sleep are especially risky for people already susceptible to depression.

He added that another red flag is if a formerly on-point worker starts getting sloppy, making repeated errors, or falling behind on work. Of course, everybody has bad days and busy weeks, but mental health experts say drastic, sustained shifts in behavior are red flags.

Some behavioral changes can also indicate depression, but self-destructive tendencies manifest themselves differently, Yost said. For example, if a coworker who used to spend weekly happy hours nursing a light beer starts knocking back doubles of vodka on a regular basis, or a formerly fastidious colleague starts coming to work in wrinkled clothes and unkempt hair, those are good indications that something might be awry in their life.

“If you don’t have, by nature of the work, time to have a social check in with one another that has nothing to do with work, then you need to structure it in,” Namie said. Ask how the person is doing, he advised, and make it clear you’re asking about them, not this project or that deadline. If their answer brings the topic back to work, steer it back to them again.

Ask what their plans are for the weekend, or how they plan to spend an upcoming holiday. (Mental health experts warn that holidays can often be especially rocky times for people suffering from depression; other “trigger” dates can be the anniversary of a divorce or loss of a loved one.)

You can broach the subject any number of ways, Namie said; for instance, “You seem distracted—is there anything I can do?” or “You don’t seem to be yourself,” both open the door to further conversation without prying or making an implicit judgment about their mental state.

“Ask, ‘What are you doing tonight? Do you have plans?’ You’ve got to force social contact,” Namie said. “Make up an excuse for some way to engage the person.”

What Not to Do

If a coworker does spill the beans about struggling with an external stressor like a divorce or money problems, or internal feelings of worthlessness or despair, it’s important not to respond with a variation of “suck it up,” even if your private opinion is that they’re getting more upset than they need to over the situation.

You want to avoid, “Oh, pick yourself up, you’ll be fine,” Yost said. “That can be very easily perceived as dismissing their feelings, and as a coworker you want to listen [and] lend a sympathetic ear,” he said.

Read next: How Do I Explain Why I’ve Been Unemployed for Nine Months?

Don’t ignore signs of trouble and assume HR will intervene. LaBier explained that, for liability reasons and fear of litigation, many corporate HR departments won’t intervene unless the person is having trouble meeting work obligations.

And don’t forget that some people might be beyond your ability to help.

“You’re not there to fix their problems,” Yost said. While some people just need to know that they’re not alone and that they do have friends, others might be wrestling with issues too big for you, as an untrained observer, to tackle.

If you start feeling like you’re in over your head, Yost suggested researching whether or not your company has an employee assistance program (nearly 80% do, according to SHRM stats) or other mental health resources. Some people with depression feel too emotionally exhausted to take these kinds of steps to help themselves, so just doing some initial legwork on their behalf can help get them on the right track.