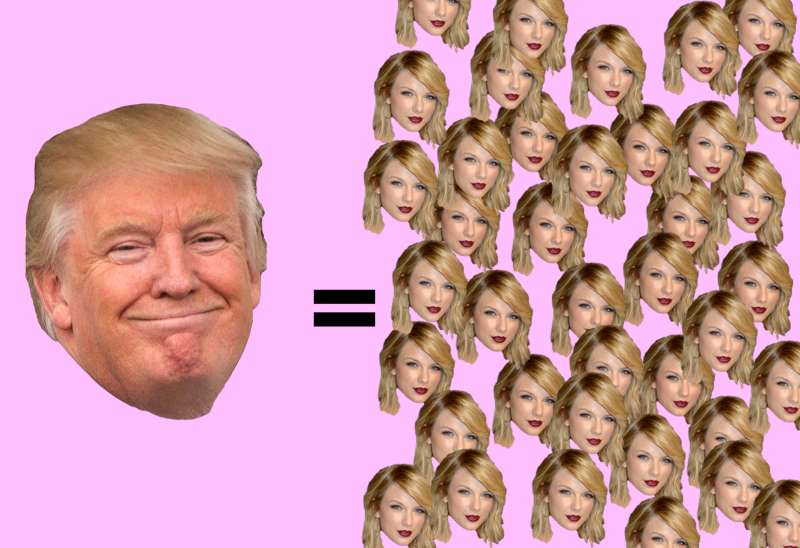 There’s no question about it: Donald Trump’s presidential cabinet is on track to be the richest in modern history. But just how rich are we talking here?

Let’s put it this way: If all of Trump’s appointees are confirmed by the Senate, his cabinet will have a combined net worth roughly equivalent to 58 Taylor Swifts.

Swift, the highest paid musician of 2016 according to Forbes, is worth an estimated $250 million—about the same as George W. Bush’s first cabinet.

Meanwhile, with the nomination of Exxon Mobil CEO Rex Tillerson as Secretary of State, the net worth of Donald Trump’s presidential cabinet jumps to about $14.5 billion, according to CBS News and other reports. Tillers isn’t even the wealthiest of the bunch. Todd Ricketts, Trump’s pick for deputy commerce secretary, has an estimated net worth of $5.3 billion. And Betsy Devos, Trump’s choice for education secretary, is worth an estimated $5.1 billion.

Even though Trump promised to “drain the swamp” of politicians, appointing billionaires and corporate leaders raises red flags.

“The people [Trump] is picking are similarly little experienced and so business-oriented that it all raises the concern that they will allow their own business interests to drive public policy in the administration,” says Robert Spitzer, chairman of the political science department at SUNY in Cortland, N.Y., and author of four books on American presidents.

This isn’t the first time a presidential cabinet has come under scrutiny for being well-heeled. Dwight D. Eisenhower—the last president to be elected without holding public office before Trump—installed a cabinet that was mockingly referred to as “nine millionaires and a plumber.” In 2012, Barack Obama appointed Penny Pretzker to Commerce. Pretzker was the first billionaire ever to be appointed to a cabinet position.

So just how rich is this presidential cabinet? We compared the wealth of the wealthiest cabinets in modern history to Taylor Swift’s net worth to give you some context.

George W. Bush’s “cabinet of millionaires” was equivalent to Taylor Swift’s net worth.
$250M in 2001

Obama’s second presidential cabinet (after Robert McDonald was appointed) was 11 times richer than Taylor Swift.
$2.7B in 2014

And if that doesn’t look like draining the swamp to you, then maybe you’re onto something.