Everybody In Washington Agrees That This Is a Problem. So Why Won't They Fix It? 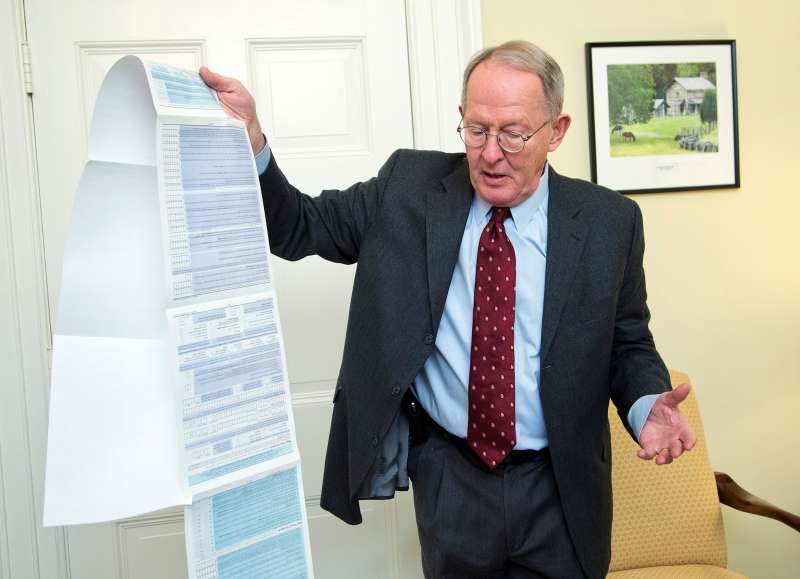 Despite worsening political divisions on other issues, here’s one thing lawmakers on both sides of the aisle agree on: Applying for college financial aid is needlessly complicated for many families.

Research has found that students who file a Free Application for Federal Financial Aid or (FAFSA) are more likely to enroll and stay in college. But more than half of high school seniors don’t fill out a FAFSA by the time they graduate, according to federal education statistics.

Simplify the FAFSA, and Congress could make it easier for students to pay for college—something that has bipartisan appeal.

So what’s stopping this no-brainer reform? Disagreement over several different options on exactly how to fix the FAFSA.

“What we hear from pretty much everyone…is that they support FAFSA simplification,” says Carrie Warick, director of policy and advocacy at the National College Access Network. “But,” she says, “the devil is in the details.”

Simplifying the FAFSA has been a priority for several years now. Since 2009, the U.S. Department of Education has been improving its “skip logic,” which allow families to bypass irrelevant questions. And this past October brought significant changes to the FAFSA intended to make it more accurate and easier to complete by allowing families to use older tax information.

Yet financial aid experts and college access organizations say the form is still needlessly complicated for many students. And as Congress is set to reconsider all federal education laws with the approaching reauthorization of the Higher Education Act, they say the time is ripe to further revamp how we apply for financial aid.

First, lawmakers will have to balance competing demands of extreme simplification with collecting enough information to accurately target aid. They’ll likely battle over the details of three main views on simplification:

There are roughly 130 questions on the FAFSA. Yet many of them ask about financial situations that apply to only 1 or 2 percent of families. So one philosophy for simplification is to create a simplified “pathway” through the online form, so typical families can get through it faster.

The National College Access Network (NCAN) and the National Association of Student Financial Aid Administrators (NASFAA) have proposed two separate but similar three-tiered systems to do that.

To start, low-income families who already qualify for means-tested federal programs such as Supplemental Nutrition Assistance Program (SNAP) or Medicaid would only have to fill out about 30 questions, since those families have already showed the federal government that they can’t afford to save for college, and aren’t likely to have, say, tax-exempt interest income. They shouldn’t need to continually prove they’re poor, NCAN and NASFAA say.

Moderate income families would have to answer about 40 questions, but wouldn’t have to bother with information about, for example, IRA deductions. “The vast majority of students aren’t impacted by that question, so why even have it?” Warick says.

Families in the top 25% or so of the income distribution would have to answer a few additional questions focusing on cash savings and assets.

In testing its streamlined process, NCAN found applicants not only finished faster than a control group, but they also committed 56% fewer errors. That means they’re less likely to be caught up in a process known as verification, the financial aid equivalent of an audit, which is a time-consuming ordeal for both students and financial aid offices.

Each year, about one-third of aid applicants are selected for verification, meaning they have to submit additional paperwork before receiving their aid. At some campuses, the number is even higher. Houston Community College, for example, has 18 staffers that work full-time on verification, as almost half of the 80,000 aid applicants are asked to provide documentation to prove their FAFSA answers, according to testimony JoEllen Soucier, executive director of the college’s financial aid office, gave before a Congressional committee last month.

There is one potential obstacle to such proposals: The IRS’s Data Retrieval Tool. Both pathway ideas rely on continued and greater coordination between the Department of Education and the IRS. Families had been able to auto fill some of the information on the FAFSA through the DRT. But earlier this year, the government pulled down the tool, citing security concerns. Now the Education Department says the tool won’t be available for several months.

Another challenge to selling this philosophy: it’s still pretty complicated. That may not do much to alleviate the stigma around filing the FAFSA.

2) Apply on a Postcard

“You don’t need all those (other) details to get a pretty good estimate about someone’s EFC,” Scott-Clayton says.

That means families could answer just a couple questions, or better yet, apply for financial aid as they’re filing taxes, so that there aren’t two separate processes. Two years ago, senators Lamar Alexander (R-Tenn.) and Michael Bennett (D-Colo.) introduced legislation that would do just that. It didn’t advance past the senate’s education committee. But Alexander is now the chairman of the Senate Health, Education, Labor and Pensions Committee, and he said in a statement that reauthorizing the Higher Education Act, and with it, simplifying FAFSA, is his top education priority this year.

Such a dramatic reduction in the number of questions comes with a trade-off, some say. Remove too many questions, and colleges and state grant agencies will need to institute their own financial aid forms.

“Then here we are with three separate forms again, all in the name of simplification,” says Megan Coval, director of policy and federal relations at NASFAA. In fact, FAFSA was created to solve that very problem.

Today, more than 300 colleges use an application in addition to the FAFSA to divvy up their institutional financial aid. Yet for the majority of college students, FAFSA is the one and only form they’ll need.

“Our goal was to make the form as simple as possible while maintaining its universality,” Warick, with NCAN, says.

Critics of this idea point out that there’s a limited amount of financial aid, and the less information that’s collected, the harder it will be to target that aid to those who need it most.

3) One and Done Filing

Students are required to fill out the FAFSA every single year. But at the University of Tampa, only 6% of the student body has enough financial changes year-to-year to warrant a new aid package.

“So 100% of us are filling out FAFSAs every year for 6% of students,” Brent Benner, director of enrollment management at the University of Tampa.

That’s a waste of time and resources for students, their parents, and college aid offices, Benner says.

Instead, Benner and two colleagues have been pushing for one-time FAFSA filing, in which students would only be required to file when they start college. If there were a change in circumstances, such as another family member enrolling in college, then a new FAFSA could be filed.

Benner doesn’t have official numbers on how many award changes there are year-to-year at other colleges, but anecdotally, he’s never heard of more than 10%. People skeptical of one-time filing argue that some families’ earnings will increase while a student is in college, meaning they could afford to pay more. That’s true, Benner admits.

“But we can’t have a complete financial aid policy to address outliers,” he says.

Last year, Rep. Bobby Scott (D-Va.) introduced a bill that would allow for Pell grant recipients to only file the FAFSA once. It didn’t get much traction on Capital Hill, but it had wide support among college organizations.

An advantage of one-time filing is that it could take place even if lawmakers can’t agree on how many questions the financial aid application should be.

Regardless of which path to a simpler FAFSA is taken, the result likely will be spending money on federal financial aid. The National College Access Network’s proposal, for example, would increase spending by an estimated $1.4 billion, or 5%. Most of that would go toward grants for low-income families.