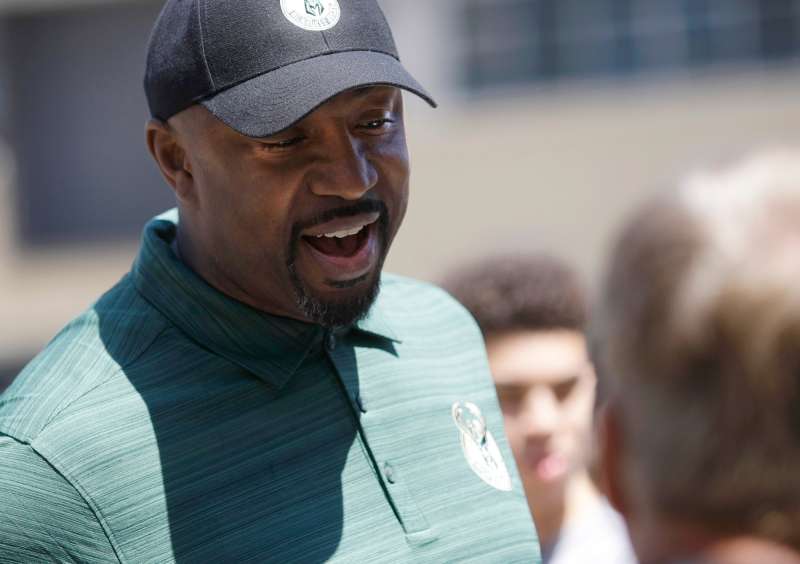 When Vin Baker was a 20-year-old center on the unheralded University of Hartford basketball team, Sports Illustrated called him “America’s Best Kept Secret.” Recently, it was widely reported that the former pro basketball star, who earned $100 million during 13 NBA seasons, is broke and currently in training for a managerial position at a Starbucks franchise in Rhode Island.

At first glance, Baker’s financial hardship seems incomprehensible: He managed to deplete that massive fortune only 10 years into his retirement from basketball. In fact, Baker’s situation is disturbingly common. According to a 2009 Sports Illustrated article, 78% of former NFL players face bankruptcy or financial stress within two years of retirement. That same article reported that the rate of NBA retirees going broke within five years of leaving the court was as high as 60%. The NBA says that figure was overblown and pulled out of thin air; according to an NBA union survey, within 10 years of retiring 6% to 8% of players had lost huge amounts of money or were having trouble making ends meet.

In any event, everyone acknowledges that the finances of pro athletes and retirees is a source of serious concern. Students of behavioral economics may not be surprised to learn that basketball players who demonstrate a preference for long-range, low-percentage three-pointers seem especially likely to run into financial problems when they retire.

Poor financial literacy, ill-chosen accountants and other financial advisors, high-risk investing, gambling addictions, divorce, cultures of lavish spending, and much else have led countless professional athletes to bottom out financially over the years. Money has put together a list of ten of the most famous flops, from the professional boxing leagues to the WNBA, as living proof that even the biggest of fortunes can have a short shelf life.

READ NEXT: This NFL Millionaire Lives on a $60K Budget to Save for the Future

Tyson was just 20 in 1986 when he nabbed the record for the youngest boxer to become a WBC, IBF, and WBA champion. During the long career in the ring that followed, he fought in over 100 professional matches, held the heavyweight championship more than once, and earned more than $400 million. Yet Tyson declared bankruptcy even before he retired in 2003.

Where did all the money go? A 2003 New York Times article on the filing claimed that Tyson “spent with the type of aggressiveness that once characterized his early round knockouts”—on everything from jewelry and limousines to Siberian tigers. Tyson claims crooked promoters didn’t help: In 1998, he filed a $100 million suit again his former promoter, Don King, claiming King had cheated him out of tens of millions over the course of the ’90s.

In spite of his relatively tiny stature for an NBA player (Iverson measures about 6 feet), this former shooting guard was once the league’s MVP, not to mention one of the highest-earning basketball players in the world. During his 2008-2009 season with the Detroit Pistons, Iverson’s salary was just under $21 million.

But when Iverson’s wife Tawanna filed for divorce in 2010 after eight years of marriage, a different financial picture came to light. Iverson was apparently broke, in debt, and incurring monthly expenses—rumored to include the cost of buying new clothes when he traveled to avoid carrying luggage—that greatly exceeded his earnings. At a 2012 divorce proceeding, Iverson reportedly pulled out his pant pockets and shouted at his wife, “I don’t even have money for a cheeseburger!”

Still, as recently as May 2015, Iverson has denied that he’s in financial straits. And the 11-time All-Star has a Reebok-funded “rainy day” trust fund worth $30 million, though he can’t access it until 2030.

One of two recipients of FIFA’s 2000 “Player of the 20th Century” Award, Argentinian footballer Diego Maradona is considered one of the best soccer players of all time. He’s been paid accordingly, setting the world record for soccer team transfer payments twice, and, for a recent coaching gig for Dubai-based team Al Wasl, earning a salary of nearly $3 million per year.

Unfortunately, the same success can not be claimed for Maradona’s management of personal finances. The Italian government claims that he owes $50 million in unpaid taxes from his time playing for Napoli from 1984 to 1991. So far, all Maradona has coughed up is some expensive jewelry, a sign that he may not be the ideal candidate to replace disgraced former FIFA president Sepp Blatter.

A three-time NBA All-Star and NCAA and NBA champion, Antoine Walker earned just north of $108 million over the course of his 13-year NBA career.

But Walker matched his big earnings with financial decisions that were questionable at best. The 6-foot-9 baller reportedly never wore the same designer suit twice, and said he was lending financial support to 70 different friends and family members at the height of his spending. In 2009, Walker was arrested for writing over $1 million in bad checks to Las Vegas casinos.

Walker filed for Chapter 7 bankruptcy in 2010, and has since teamed up with Morgan Stanley, where, as a consultant for Morgan Stanley Global Sports and Entertainment, he’ll provide insight to financial advisers and clients. “Gone In An Instant,” Walker’s documentary about his financial downfall, is scheduled to be released later this year.

More than a decade after his 1985-1996 Major League Baseball career had ended, this former Mets and Phillies star seemed to be on top of his financial game.

In 2008, Dykstra listed his net worth as $58 million; a year before that he dropped $18.5 million on a mansion in Thousand Oaks, Calif. He even had his own website for investing ideas (“Nails Investments”), a magazine geared towards athletes’ high-end lifestyles (Player’s Club), and a financial advice column on TheStreet.com.

But in 2009 Dykstra, claiming to be a victim of mortgage fraud, lost his house to foreclosure and filed for bankruptcy, listing less than $50,000 in assets and $10 to $50 million in liabilities. In 2012 he was sentenced to 6.5 months in prison for bankruptcy fraud, concealment of assets, and money laundering.

WNBA salaries are notoriously lower than those in the NBA—in 2014, the maximum league salary was $107,000—but Swoopes, a three-time Olympic gold medalist and WNBA MVP, earned over $50 million by becoming the first female basketball player to lend her name to a sneaker: the Nike Air Swoopes.

Unfortunately, a series of bad investments and unscrupulous lawyers and agents led her to file for Chapter 13 bankruptcy in 2004. In 2009, when Swoopes was 37 and was cut from the Seattle Storm, she was so poor she couldn’t afford to pay rent.

Generally speaking, NHL players don’t make quite as much as the stars in other professional sports. But you’d think that McCarty, a four-time Stanley Cup winner who earned more than $15 million during his 15-season career as a tough-nosed “enforcer” on the ice, would have been comfortable in retirement.

Instead, McCarty reportedly fell under the influence of drugs and gambling, and filed for bankruptcy in 2006, before his NHL career had even come to an end. Later, he was also accused by the IRS of failing to pay his taxes. In 2012, McCarty was featured in a couple of episodes of TruTV’s “Hardcore Pawn”—less than three years after retiring, he was working at the pawn shop featured in the show.

Even decades after winning a gold medal for figure skating in the 1976 Winter Olympics in Innsbruck, Austria, Dorothy Hamill was one of the nation’s most popular athletes. A 1993 survey by the Sports Marketing Group of Dallas placed her popularity above that of Michael Jordan. When she signed a $1 million-a-year contract to skate for the Ice Capades—a franchise she would later come to co-own—her financial future seemed set.

And yet America’s favorite figure skater was forced to file for Chapter 11 bankruptcy in 1996, blaming her estranged husband for steering her into bad business decisions. Hamill continued to tour, perform on TV, and in 2007 published a New York Times bestselling memoir A Skating Life: My Story.

Over 15 seasons as a standout NFL wide receiver (1996-2011), Terrell Owens was known for his athleticism and emotion on the field, as well as a wide array of end zone celebrations after scoring touchdowns. But unlike his football record, Owens’ finances left little to celebrate.

Despite an estimated $80 million in career earnings, Owens was forced to file for bankruptcy in 2012, citing bad investments, a collapsed housing market, and some $50,000 of monthly child support payments.

As a quarterback for the Atlanta Falcons, Philadelphia Eagles, and New York Jets, Michael Vick surpassed $100 million in career earnings—pretty amazing considering he spent nearly two years of his prime playing days in prison on charges related to a dog-fighting ring.

While in jail, in 2008, Vick filed for bankruptcy protection and convinced his creditors to restructure his debt. By living on a budget of $300,000 since his release from prison, Vick has reportedly managed to pay back almost all of the $18 million he owed at the time.