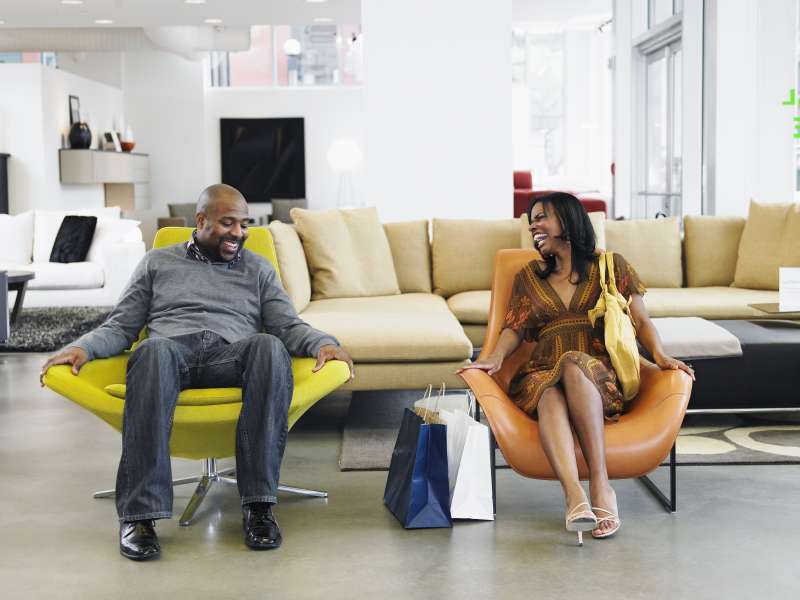 Buying furniture has always been a perilous, complex affair. You don’t buy a couch the way you buy a television or a laptop computer. You can’t carry the couch out of the store with you (most of the time). Heck, usually you don’t really have a great idea when the couch will get to your living room.

Like all businesses, the furniture industry is undergoing dramatic changes, thanks to the dual challenges of the digital age and the recession. That means both good and bad things for furniture shoppers. The good: There are more choices than ever, including buy-couches-from-home apps. It helps with comparison shopping, too. The bad: Many furniture stores are struggling, which means you are even more likely to encounter aggressive sales tactics and sneaky techniques for adding profits, like funky financing offers. I can’t tell you what color loveseat will best match the carpet in your living room, but I can tell you four gotchas you should watch out for the next time you furniture shop.

Before we get to the Gotchas, however, here’s a bit on the state of the furniture industry. I’m a big believer in knowing your opponent.

Not surprisingly, the bursting of the housing bubble was a killer for the industry, as fewer home purchases mean fewer couch purchases. Furniture sales plummeted 13% between 2008 and 2009, according to this report from analyst firm ABTV.

It has slowly recovered since, and 2013 was the first year to exceed 2008 sales. However, the meandering recovery of the U.S. economy means the environment for furniture stores continues to be challenging. Demographic changes also add to the struggle. Delayed household formations – i.e. more 30-year-olds living with their parents – has also hurt furniture sales. The continued fascination with “disposable” furniture – think Ikea and Target – hasn’t helped much, either.

“The American furniture industry is at a turning point. Never known for its ability to respond quickly to change, the industry finds itself emerging from the Great Recession to face some significant challenges,” says the ABTV report. “Slower-than-expected economic recovery, shifting consumer buying preferences, skilled worker shortages, rising labor costs, technology integration, new distribution channels and global competition… It’s a sticky wicket: Baby Boomers are downsizing to smaller spaces, new home sales are increasing gradually, but mortgage reforms have made it difficult for younger homeowners to qualify, given the debt loads many are carrying from student loans.”

These shifts create interesting issues in the furniture industry. Downsizing Baby Boomers often want new things when they leave the five-bedroom house for the two-bedroom condo. But their old things are filling up second-hand stores with great deals, ABTV says.

“The used-furniture market is now glutted with Boomers’ upholstered sofas, armoires, formal dining room sets, and antique collectibles that are being shed in order to downsize,” says the ABTV. “With the market full of the Boomers’ cast-aways, consignment shops and traditional non-profit donation centers such as Goodwill and the Salvation Army have become pickier about what items they will accept for resale and don’t hesitate to turn away anything they can’t use or aren’t willing to pay more for.”

Still, sales at Ashley Furniture, the largest furniture seller according to ABTV, were up 4% between 2013 and 2014, so the story isn’t all bad.

Now that you know a bit more about the furniture industry, here are four things to watch for as you shop.

Much like mattress stores, most furniture stores put meaningless price tags on their items. Expect to haggle. And never tell anyone “We got our couch at 50% off,” because that’s nothing to be proud of. It probably means the price tags were too high to begin with. Discounts are distracting. Shop around and get an honest sense of the real out-the-door price for the item in your class, then just make sure you pay a fair price.

Like financing at a car dealership, delivery is often where a good deal goes bad. The price of delivery should be among the first things you discuss at the store, not an afterthought.

It’s incredibly important to be realistic about your furniture choices. If you order a couch that can’t fit in your front door or up the stairs, and there’s damage during delivery, you’ll have quite a fight on your hands. Demanding that someone try to move a square peg into a round hole can shift the liability to you. One tip: Digital laser tape measurers work great and they’re really inexpensive now. They’re also subtle to whip out in stores. Old fashioned tape measures work, too. Also, some furniture requires assembly on-site. Be sure to understand who pays for what, and don’t forget to add in the cost of tipping the folks who actually do the heavy lifting for you.

3. Getting the Merchandise Home

For most consumers, the nightmare begins after the credit card is swiped. Then, the reality of the delivery schedule kicks in. Many furniture delivery trucks rival the cable guy for late-or-no-shows. Expect to lose a day of work getting your furniture, and maybe two if there’s a cancellation. The best way to protect yourself is to verify the store’s cancellation policy in case of a delivery problem. Make sure you can get a full 100% refund if the store doesn’t live up to its end of the bargain on delivery. In reality, you probably don’t want to cancel a purchase right away if there’s a screw-up, but having the right to do so is important. Nothing lights a fire under a sales person faster than the prospect of losing a commission because the delivery truck screwed up.

The other way deals go bad is the classic “interest-free financing” offer. Such deals can be structured many ways, but they often involve what’s called “deferred interest.” That means the loan is free, but if you fail to pay it off entirely during the free period, you end up paying retroactive interest for the entire time period you borrowed the money. With furniture, the rates are often 20-30%.

Further complicating the deals for consumers is that minimum monthly payments required on the furniture loans DO NOT add up to pay for the entire purchase during the interest-free period.

Plus, applying for store credit this way can hurt your negotiating position. It’s harder to tell a store, “$2,000 and I don’t have a penny more to spend” if that store has already approved you for $3,000 in financing.

In the end, the best advice I’ve heard about buying furniture is to go up or down – buy really cheap, because you only want it a year or two, or buy really high quality and plan to keep it a lifetime. In between is where the suckers live. Real wood furniture can be repaired – it can be sanded and stained, for example. Temporary furniture can be broken into pieces and thrown out in the trash. A sort-of-nice kitchen table isn’t worth the money.

If you’re not in a position to buy real wood new, go to those crowded consignment shops the ABTV report mentions and buy something used. Or try Craigslist, or one of a host of new mobile phone apps, like Sell It.