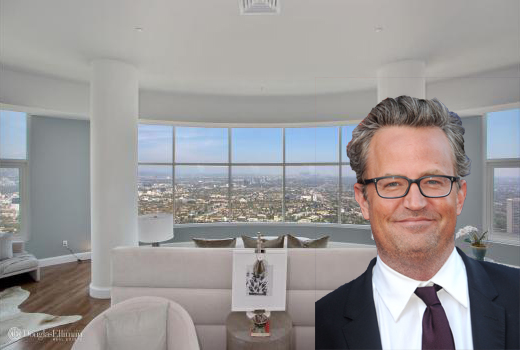 This apartment is certainly more luxurious than Chandler and Joey’s on Friends.

Matthew Perry just bought a $20 million penthouse apartment in Century City, a neighborhood of Los Angeles. The 9,318 square-foot, full-floor pad has four bedrooms and eight bathrooms, according to Trulia.

With floor-to-ceiling windows, the space includes stunning views of the downtown Los Angeles skyline all the way west to the Pacific Ocean. The penthouse also has a dining room that can seat up to 25 people, a sun-filled master suite and a giant kitchen.

The condo is located in the luxurious 42-story building, “The Century,” which sits at the intersection of the busy streets of Avenue of the Stars and Olympic Boulevard. The relatively new building includes amenities like four private acres of gardens, a gym, pilates and yoga studios, a screening room, a spa, a wine cellar and a 75-foot pool. It also has bar lounges and a full-service restaurant.

Perry is known for his taste in expensive Los Angeles real estate. Perry also owns a $12 million beach home along the coast in Malibu, Calif., and he has listed another home of his in the Hollywood Hills for $13.5 million. He had purchased that home in 2011 for $8.5 million.