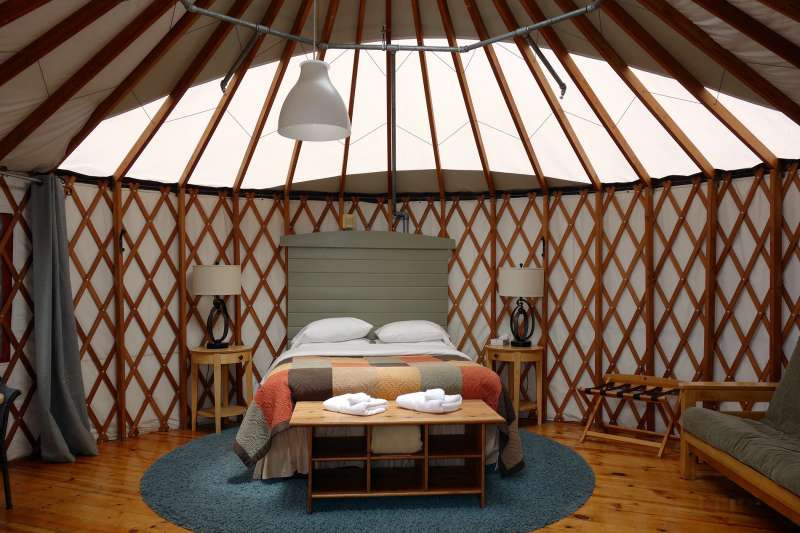 Often, the best thing a traveler can say about a motel is that it was just like you’d expect. In other words, there was nothing memorable about the stay whatsoever. Instead of planning your summer vacation pit stops around basic hotels and motels that are serviceable—but also anonymous and utterly forgettable—consider venturing off the beaten path this summer. Here are 10 funky and unique kinds of lodging that are sure to create great memories for road trips and family vacations.

It’s a cliché, but you’re bound to feel like a kid again if you get the chance to spend the night in a treehouse—perhaps while bringing along kids of your own. At Oregon’s Out ‘n About Treehouse resort (or “treesort), guests choose between more than a dozen different treehouse rentals, starting at $130 per night. The treehouses are reached by rough-hewn stairs, handcrafted spiral staircases, and swinging bridges. Most of the accommodations are 15 to 20 feet off the ground, though the highest treehouse is perched 47 feet up in a Douglas fir. There are quite a few independent Airbnb treehouse rentals around the country too.

The tipis offered as overnight lodging from the Under Canvas operations at Yellowstone and Glacier national parks fall into the category of “glamping,” i.e., glamorous camping. With cots, mattresses, pillows, blankets, towels, and safari chairs all provided under a canvas tipi exterior, you’ll hardly be roughing it. Starting at $95 per night, it’s one of the cheapest options that can still be described as luxury camping. Some state parks in Montana, Minnesota, and North Dakota rent tipis for overnight stays as well.

When the only way to get to your accommodations is on foot, one thing is for certain: There’s no way your sleep will be disturbed by the sounds of honking cars or road traffic. Beyond the tranquility of staying overnight in a hut or lodge reached only via hiking trails, guests get to enjoy the way that somehow conversation, food, and yes, sleep, are always better after long, active days in the great outdoors. Among the hike-in options around the country: The Hike Inn in northern Georgia, the backcountry Granite Park Chalet and Sperry Chalet lodges in Glacier National Park, and the series of huts in the White Mountains of New Hampshire maintained by the Appalachian Mountain Club (from $127 per person, dinner and breakfast included).

The sound of crashing waves below, the salty smell in the air, and the views that stretch for miles of empty water are among the memories that you’ll come home with after a night spent in a lighthouse. At just $28 for a dorm bed and $76 for a private room, northern California’s Pigeon Point Lighthouse Hostel has to be one of the world’s most affordable lighthouses that welcome travelers. Other options include the Race Point Lighthouse in Cape Cod and Michigan’s Big Bay Lighthouse B&B.

Dotting the deep forests of the western mountain states, fire lookouts were built decades ago to be manned by rangers hoping to warn of forest fires as soon as they erupted. Modern technology has made fire lookouts less of a necessity. But the structures remain, and dozens of fire lookouts can be rented by the night or week. Montana has the most lookouts available for rent, with 20; Oregon has 19, while Idaho has 11. The Squaw Mountain Lookout, one of two fire lookouts in Colorado, is a 14-foot-by-14-foot granite lodge built in the 1940s at an altitude of 11,000 feet. The cabin, which rents for $80 per night, comes with an electric stove, refrigerator, heat, and beds, but no fresh water. Most important, the building is encircled with windows—it’s a lookout, after all—and the views are endless.

OK, so spending the night in a covered wagon is sort of a gimmick. Inside, the accommodations are usually not all that different from the bunks in a basic state park cabin. But this is a seriously fun gimmick, especially for anyone fascinated with the era of cowboys, pioneers, and “Little House on the Prairie.” The wagon accommodations at Colorado’s Strawberry Park Hot Springs run $60 per night and include access to the natural hot spring pools. Some campgrounds, like Smokey Hollow in Wisconsin, have big wagons that can fit the whole family (from $70 for up to five people). And the Bar 10 Ranch, within striking distance of the Grand Canyon in Arizona, has a wide range of lodging options including 13 covered wagons.

Around the country, retired cabooses and train cars have been given new life as private nightly rentals at B&Bs and hotels. Iowa’s Mason House Inn, for instance, has eight rooms in the main house, which was built in 1846, as well as the circa 1952 Caboose Cottage out back. Over in Missouri, the Cruces Cabooses B&B consists of a pair of cabooses from the Burlington Northern and Santa Fe lines that sleep five or six and rent for around $100 per night. Meanwhile, in Pennsylvania’s Amish country, the Red Caboose Motel welcomes overnight guests and daytime visitors to check out more than three dozen train cars on the property.

Yurts are basically tents. But they’re round, sturdy, and tall, meaning they’re tents that won’t leak, and that give you the space to stand up and stretch your arms. All in all, they provide all the fresh air of tent camping—without the claustrophobia. State parks in places like Idaho and Washington have tons of yurts at very affordable rates. The Treebones Resort in Big Sur, Calif., offers the more upscale yurt experience, with queen-size beds, running water, and redwood decks overlooking the Pacific.

The more traditional way to spend the night in jail may not cost the “guest” any money, but we’ll go out on a limb and say that the former prisons converted into hotels are probably more comfortable. In 2007, the old Charles Street Jail in Boston was reborn as the $500+ per night Liberty Hotel (liberty, like freedom, get it?), a luxury property that preserved the old jail’s catwalks and 90-foot atrium as the centerpiece. More affordable voluntary jail cells can be found here and there around the country, such as the Jailhouse Suites ($99 per night) in Yellow Springs, Ohio.

There’s movie night, and then there’s MOVIE NIGHT. Motels in Vermont (Fairlee Motel & Drive-In) and Colorado (Best Western Movie Manor) both offer the exceptionally rare opportunity to catch a movie at the drive-in from the comfort of your bed. Yet another bucket list booking for movie nuts is Utah’s Shooting Star RV Resort, which in addition to RV sites rents Airstream Trailers from $119—and the property boasts a vintage on-site drive-in movie screen and films on Tuesday, Thursday, and Saturday nights.