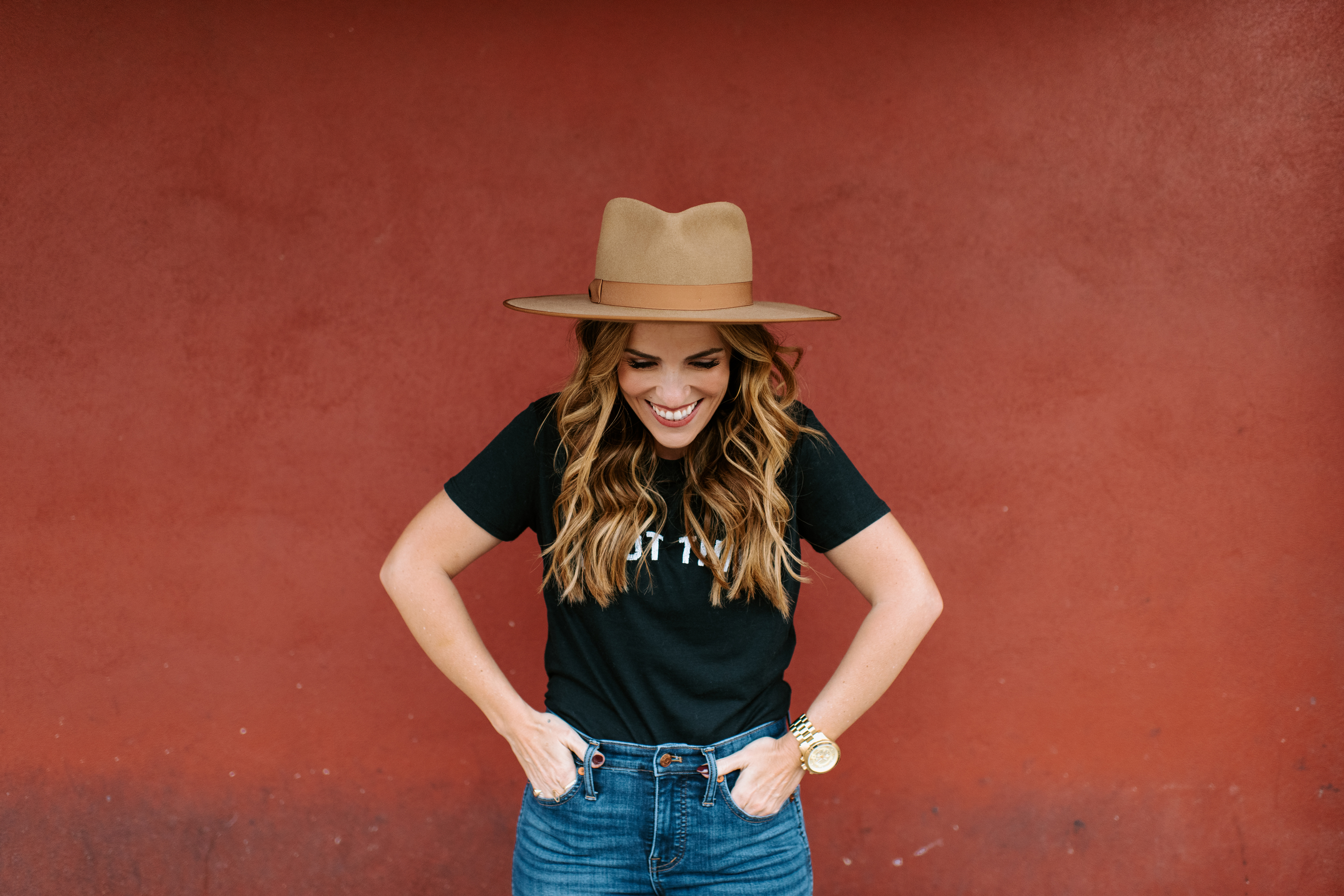 Girl, Find Your Balance: How Rachel Hollis Went From an Overwhelmed Mom to Productivity Queen

Somehow, Rachel Hollis has cut through the noise.

Hollis’ “thing” is authenticity — she’s just a normal gal who quotes Demi Lovato and fills her books with anecdotes basically anyone can relate to (cutting your own bangs in middle school; smoking cigarettes as a teenager to impress the in-crowd). And she espouses standard motivational speaker fare … “Go confidently in the direction of your dreams,” and all that. But her impact is staggering: Hollis has more than 1.7 million followers on Instagram alone. Her top YouTube videos garner hundreds of thousands of views. Her “personal growth” conferences, which cost between $200 to $1,800 to attend, sell out event centers all over the country.

She’s got critics: At the height of her Girl, Wash Your Face popularity, some blasted the book’s “pick yourself up by your bootstraps” narrative, and Hollis’ failure to acknowledge how hard it is for women of color and other disenfranchised groups to replicate it.

Still, as gurus go, you could do worse than a militantly-positive mother of four who likes to jog and journal. And as more and more books designed to #motivate hit bookstore shelves, Hollis has made hers hard to ignore.

Today, she’s wrapping up a book about health and body image, and working on a talk show pilot for Quibi, a new short-form video streaming platform. I caught up with her on a recent trip to New York.

This interview has been edited and condensed for clarity.

You do an awful lot of jet setting. Aren’t you exhausted?

Yeah, I’m pretty excited to go back to my hotel and take my bra off.

Curious: am I allowed to call you an “influencer?”

I think I have influence but I wouldn’t call myself an influencer.

I started as a blogger back in the golden age of blogging, 2007. We didn’t know how to monetize that … we just wanted to make content and put it out in the world. I stepped out of it right when “influencer” became a thing.

“Influencer” is basically a bad word these days …

Yeah and I hate to sound a bit Pollyanna here, but I really believe in people being allowed to create ... whatever that looks like for them. There’s so much negativity that surrounds someone wanting to get excited about a pumpkin spice latte. And I’m like, You know what dude? if she wants to put on a blanket scarf and roll with her latte, if that makes her happy, don’t trash her creation. I’m a very non-judgmental person. I don’t crap on anyone’s anything.

Is that why so many women have latched on to you?

I have a visceral reaction to saying something that you’re not actually doing.

This is probably going to sound insane, but if I’m having a hard day, I look at The Rock’s Instagram feed. I’ll go look at a video of him doing a workout with chains around his neck. And I’ll think OK, The Rock is pushing himself, I can push myself too.

I recognize that for some people, I am that Instagram feed. I don’t talk about hard things just to talk about hard things. I only do that if there’s something that I learned that I think you would find helpful. I also believe deeply that the world needs more positivity. And more, reaching for joy. So that is what I’m trying to create.

When you’re writing a book, or a social media post, who do you imagine you’re speaking to?

She’s mid-30s. Most of (my audience), I would say, are working moms. Lots of Southern girls. But it’s a big mix.

Instagram and YouTube have helped make you famous, and you mainly use them to talk about body positivity and self-love. How can you exist in both worlds?

I'm really mindful of, if I’m going to share a picture that a professional photographer took, and there was good lighting and my hair looks great, than I'm also going to show you a picture of my stretch marks and my saggy stomach and my back fat and the hair growing out of the mole in my back. I’m going to try really hard just to show you real life.

I want to interact with my community, that’s a huge part of my brand, and what I’ve built, and I can’t do this work if I’m not doing life with them. But a lot of negative things happen because of the “like.” Because that’s the test of succeeding, whether people “like” your photo. Just like a lot of people, I used to go back [on old Instagram posts] and be like, “how’d that do? How’d that do? How’d that do?” Now I’m just like ... “dude, stop.”

I went through recently and unfollowed about 600 accounts. 600! That’s a lot of accounts … a lot of lifestyle bloggers who are mostly known for wearing cute outfits and beautiful hair.

Frankly, I have a daughter, she’s very little. Fast forward 10 years ... if she’s following a bunch of women that don't look like her and she can never look like… I don’t know how that serves her. So now it’s just me and the Rock and his chains. And food.

You’re a big mental health advocate. When did that start factoring into your idea of “personal development?”

I was having really debilitating anxiety attacks. I had a small business, probably a staff of four at the time. And I had two little boys, both under three, and, ugh... it was a lot. I’d go to work and try to be strong for the team, and do all the things, and I would come home and have a full load meltdown. And I was managing the anxiety with drinking. And I understood that I had a problem.

I have a high school diploma. Literally everything I know I found for free. Books at the library, podcasts, Youtube videos. And I approached mental health the way I approached business. It was kind of like a map, if you tried one thing it would lead to another clue, and that would lead you somewhere else. For me it was lots of therapy. I took up running. I stopped having 17 shots of espresso in a day. I changed my diet. And for the first time in my life I was managing it.

The truth is, I don't know if it ever really goes away. Anxiety is what my body knows.

My days are packed from start to finish. And when I get home I don't want to be, like, a lump. I want to be present. I don't want my kids to be like, oh my mom built this company, but she was too tired to watch Hocus Pocus with us.

So mental health for me looks like, number one, every single day of my life, intentionally living to give myself the best chance at energy, joy, being productive, and feeling good. It really is a very intentional process. Really figuring out the food I need to eat, the exercise, the water, the sleep, the therapy, the prayer, the talking to friends, the rest, the vacation … whatever is required to operate at the level that I want to operate at.

Is this an issue a lot of women in your community struggle with?

Anxiety is the number one thing affecting the women in my community. And so often, anxiety is wrapped up in thinking that they’re the wrong kind of woman.

There’s so much potential in women that is untapped because we are drowning inside of other people's opinions. And the world told us we were supposed to be a certain way.

Was that true of your experience?

Absolutely. I was a working mom, I was very ambitious, and nobody in my life was supportive of that. I didn't have any friends. I didn't understand that I could use media to find women who were like me. So I was going through my life feeling … wrong.

You talk a lot about depression, and about being an ally for the people in your life who are struggling. Where does that stem from?

Some women very close in my life, and one in particular, struggled [with depression]. This was back when I was an assistant in L.A. I remember burning a CD for her on my computer filled with Beyoncé songs. And every day, yelling at her, “GET OUT OF BED! PUT ON BEYONCÉ!” Like literally every day for a year. Literally. Same time every day. And if she didn’t answer the phone, cussing her out on the answering machine. “ANSWER THE PHONE. PUT ON BEYONCÉ.”

My older brother committed suicide. This is a topic that’s so close to my heart. And God, I don’t have the answer, but if you can fight for the will to try … so you can get a different perspective, even for a moment. Not like “life is perfect,” but enough to stand up and keep going. I don’t know the answer. But I know you’re worth fighting for.

Something that stuck out to me in your last book, Girl, Stop Apologizing, was how you work towards goals. Instead of doing on a bunch of different projects at the same time, you try really hard to focus on just one thing, and put all your energy into completing it. Why is that so important?

There is something so powerful at working towards and achieving a goal. It makes you realize what you’re capable of. If you could go on a turkey trot at Thanksgiving, if you could do something simple that you didn’t think you could do, could you change your finances? Could you go back to school?

It doesn’t even matter what the goal is. It’s just about challenging yourself to reach for something. And when you do, it’s like, holy crap. The whole world is open in a way you never saw before.

Can we talk about some of the criticism you’ve gotten? What do you make of all that?

Some of the feedback on Girl, Wash Your Face was that not everyone has the same access and resources to pick themselves up and keep going. I understand that thought, but I will die on this hill: Anybody can work to change their lives. Anybody can become a better version of themselves.

I don’t have a huge ego about it. If the thing that you don’t like about me is I believe that anybody is capable of great things, alrighty. That’s fundamentally who I am. I’m positive as hell, and I believe in people deeply.

Did that criticism shape you? Do you talk about success, or privilege, differently now?

At the same time, I did grow up in a very different socioeconomic background than I am in today.

I did move out at 17 to escape a really bad family situation. I did work three jobs. I did have cars repossessed. And I remember looking at people who had built something of their lives out of not a lot. And that inspired the hell out of me.

The Best Tax Software for 2020

How to File Your Taxes for Free