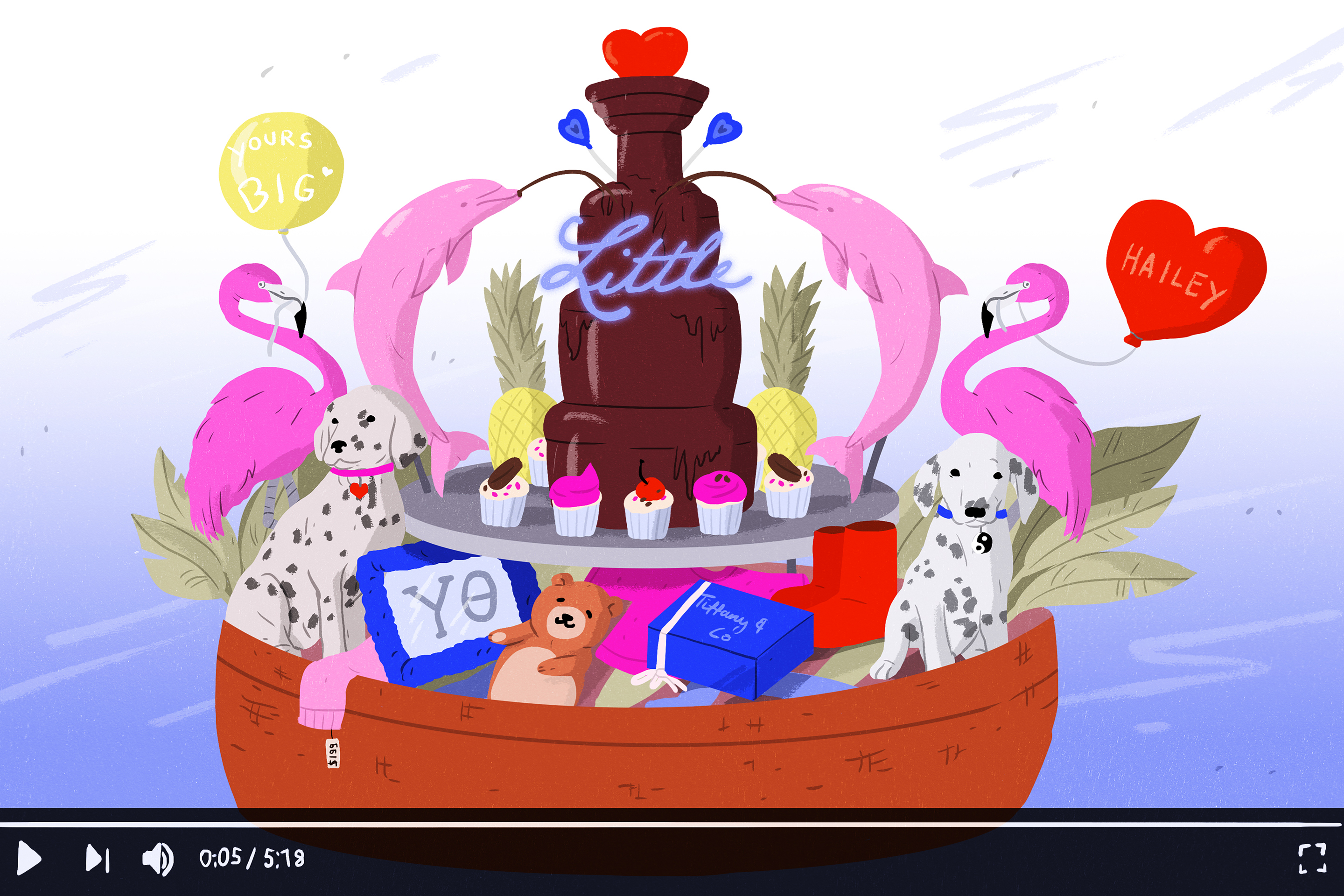 Illustration for Money by Laura Breiling

It’s a school night in late February, and YouTuber Ashana Sule is losing her friggin’ mind over some marble drink coasters.

“These look really expensiiiiiiiive,” she tells the camera, beaming. “It’s like, I can’t. I don’t deserve this. I don’t understand.”

The coasters came in a mountain of other stuff: a fragrance diffuser, a clay facial mask, a stack of t-shirts, some snacks. There’s a teddy bear sitting just out of frame — it’s nearly as tall as Sule.

This is day one of sorority “spoils week” at Chapman University, a private college outside Los Angeles. New inductees of Alpha Phi have just been paired with a “big sister,” an older member who’ll be their mentor, and help acclimate them to greek life, in the months ahead.

At the end of the week, Sule will find out who that person is. But for now, her “Big” is more like an over-the-top secret Santa, showering her with presents in the days leading up to the “reveal.” A hot pink tracksuit, a coconut candle. Ariana Grande perfume.

“I don’t even need a man anymore,” she says on day two, waving a dozen roses in front of the camera. “I have my Big.”

The fall semester is about to kick off at colleges across the country, followed by a new round of sorority recruitment. “Spoils week” isn’t a tradition on every campus, but it’s a BFD where it is (most sororities call it “Big/Little week,” so that’s what I’ll call it, too). And since YouTube exists now, it’s also all over the internet.

Big/Little videos are kind of like unboxing videos, a Youtube phenomenon where someone opens a package—a gadget release, a hot new toy—and basically just tells the audience what they think about it.

In the sorority version, the intensity is turned up about 1,000 notches. And for good reason: This is a hodgepodge of gifts carefully selected by a popular upperclassman. The excitement is palpable, and addicting, and separates the trend from pretty much every other sorority tradition. Greek rituals are historically hush hush affairs — you’re not supposed to talk about what goes down during orientation with anyone outside of your chapter. But everybody talks about this one.

”It’s hard to keep something secret if 500 girls on campus are all getting gifts,” says Brooklyn McKnight, a 19-year-old student at Baylor University in Waco, Texas. “Even people who weren’t in sororities, like my roommates, were excited for me.”

Brooklyn and her twin sister Bailey have been making vlogs since they were nine years old — today, their YouTube channel has more than 6 million subscribers. When they pledged Chi Omega last fall, they had two different Bigs (i.e. two totally separate sets of gifts). They posted a supercut, and nearly a million people watched it.

Most of the gifts in their video make it to just about every Big/Little haul: candy, t-shirts, sorority memorabilia. But the wildcards are what makes these things so fun to watch, and the twins’ video doesn’t disappoint. On day one, Brooklyn got a replica of a ring her “Big” wears every day. Bailey got the oversized head of a mascot bear (“What am I going to do with this? Oh my word.”)

About 600 miles East, at the University of Mississippi, Phi Mu’s Bigs go even harder.

At that chapter, it’s tradition to buy presents in a specific shade of bubblegum pink, and stack them together in a common room every day of reveal week. Lindy Goodson made a video of each haul last year — there's so many Hubba Bubba-colored goodies crammed into one room it's hard to get around it.

The bulk of these gifts are hand-me-down clothes and fistfuls of candy, Goodson says. She was a Big for the first time last year, and learned some “special tactics” to make the piles look bigger than they actually are (ex: roll up a bunch of t-shirts into a stack, and use them to prop up the cooler gifts).

“I’ve heard of girls getting Kate Spade bags,” she says. “One got pink Hunter rain boots.”

It’s fun to see all the crazy stuff people get, Goodson says. “But also, like … dang.”

All told, it’s not uncommon for Big sisters to spend hundreds of dollars every day leading up to the “reveal.” It’s often one of the most expensive commitments a sorority girl makes (And since dues alone cost most members $1,000 a year or more, that’s saying something). To save money, some fill their baskets with homemade cookies and DIY craft projects. Others just buy a ton of stuff.

When Savannah Halley pledged Chi Omega at the University of Tennessee last year, she made a string of videos of all the swag that came her way: Cheez-Its, soda, friendship bracelets, peanut butter cups, car decals, more t-shirts than she knows what to do with (one, from a campus Halloween hayride in 1990, is older than Halley is. “I thought that was super dope,” she says).

Halley's on summer break now, and has a stack of Big/Little leftovers crammed in the corner of her room she still needs to find space for. She's started another pile of merch for the Little she’ll get later this year — sweatshirts, coffee mugs, Chi Omega memorabilia. By the end of it, she anticipates spending about $500 on gifts.

The thing about Big/Little week, Halley says, is that it takes place in a sort of limbo — new pledges have just survived recruitment, or “rush,” and are still figuring out if they can hack it as a sorority sister. The gifts are a grand gesture to welcome them in, “so people definitely go all out,” she says.

Usually, the week ends with a ceremony — newbies find out who their "Big" is by popping a balloon with a picture of their face inside, or doing a scavenger hunt (These things are getting more elaborate every year. I asked Pinterest, a popular resource for all things sorority, what people search for related to Big/Little week. “Boxes you can pop out of” is “a strong theme,” a rep says, up 62% over the last year).

Videos of these reveals—the people reveals—make it to YouTube too. Like the gift unboxings, the most popular ones rack up hundreds of thousands of views. But those aren’t the best ones.

The best videos are low-production vlogs from 18 and 19-year-olds who make YouTube videos because that’s what 18 and 19-year-olds do now. They all have the same, ear-to-ear grin — the look you get when a cool college girl wants to be your friend. And through their shaky, amateur footage, you see the hopeful start of what might be one of the most influential relationships of their young life.

When Ariana Covarrubias, a 19-year-old student at California State University, Los Angeles, uploaded her Big/Little video in April, it started with her thumbing through a heap of gifts—M&M’s, stuffed animals, a Justin Bieber coloring book—and ended with footage from the day she found out which Alpha Sigma Tau sister gave them to her.

She’s wearing a hot pink bandana over her eyes, and when she takes it off, and sees a girl named Chelsea standing in front of her, she wraps her up in a tearful bear hug. Then she hugs her three more times.

“Every little item that was in there meant something to me,” Covarrubias says.