If You’re Unemployed, Working From a New State or Freelancing Due to the Pandemic, Start Preparing Your Taxes Now 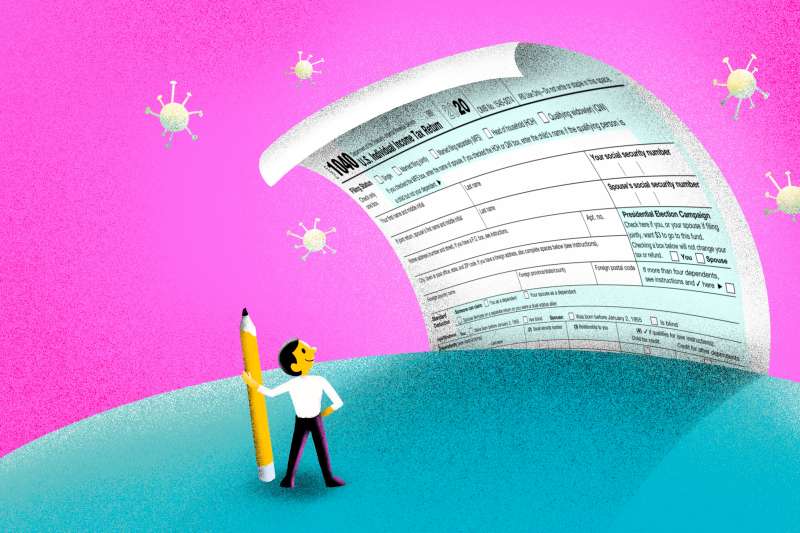 You’re probably eager to put 2020 behind you, but unfortunately, at least one aspect of this tumultuous year is going to linger into the next one.

Tax season 2021 is primed to be a confusing one, with a laundry list of new considerations to take into account. For the millions of Americans who lost their jobs, were relegated to working from home or taking on gig work to make ends meet, there are potential tax ramifications to the changes we made in our lives to accommodate COVID-19.

Come April, your income taxes might look a little (or a lot) different. Here’s what to keep in mind now so you’re not surprised by a big bill.

Having an emergency fund is now more important than ever.
By setting some money aside in a Savings Account, you will be prepared to face any emergency that could arise. Click on your state and get started.
Open an Account Today

Residency rules will cause confusion

Let’s say you decamped from an apartment in a big city to a summer house for a few months this year, or moved back into your childhood home halfway across the country.

If you live and work in different states (even if you’ve been telecommuting) you could get hit with tax bills from both places. “In some cases, there will be technical tax liabilities owed in both jurisdictions,” says Garrett Watson, senior policy analyst at the Tax Foundation.

Watson says that some states do credit you for the taxes you pay to another state, or make special exceptions for metro areas where state-to-state commuting is common, like Washington, D.C. workers who live in the surrounding suburbs of Maryland and Virginia. But not all of them do. (Notably, the tri-state greater New York City area does not have any of these so-called “reciprocal agreements,” so Manhattan commuters who live in New Jersey and Connecticut have to pay taxes to both states.)

Lawmakers recognize this is going to be a headache for people across the country because so many people spent time working from home — whether their primary home, weekend home or the home of friends or relatives. They’re currently wrangling with this question and trying to come up with a fix but as of now, haven’t reached any kind of resolution, says Craig Wild, senior partner at Wild, Maney & Resnick, LLP.

“I don’t think there’s real clarity on each state’s interpretation,” Wild says. “I could see a lot of scenarios where people are working from home, [and] they could get a big hit.”

One thing you can count on, though: Even if you spent part or most of 2020 in a state that doesn’t levy income tax on wage income—Alaska, Florida, Nevada, New Hampshire, South Dakota, Tennessee, Texas, Washington or Wyoming—you’ll still owe taxes in the state where you keep your primary residence, Wild says.

Freelance taxes will be tricky

This means independent contractors and freelance workers—including anyone who picked up gigs delivering groceries for Instacart or driving for Uber Eats—need to make estimated quarterly payments, even in the middle of a pandemic, and even if they typically get a refund on their taxes.

“Estimated taxes are a huge issue right now,” Wild says. “People who are cash-poor at this point are skipping those payments.”

If you’re making money and taxes aren’t coming out of it, “There’s going to be a penalty due,” he warns. (The formula for working out exactly how much that penalty will be is detailed in a 12-page IRS document, form 2210.)

Ordinarily, Wild says he advises self-employed clients to pay 110% of their previous year’s tax in equal quarterly installments (that percentage can be bumped down to 100% for filers with less than $75,000 in annual income) to avoid owing a penalty. But if self-employment is new to you — as in, if you picked up gig economy work for the first time this year — you need to keep a tally of how much self-employment income you earn each quarter.

Unemployment insurance will be considered “income”

With a record-high number of Americans out of work in 2020, many people filed for unemployment insurance for the first time.

Filers are given the option to have taxes withheld from unemployment payments when they sign up, but the pandemic attacked the livelihoods of millions of Americans, making the need for immediate cash a priority, so many chose not to.

Unemployment payments ARE taxable, just like income you earn from your job. You might wind up in a lower tax bracket since unemployment insurance doesn’t completely replace wage or salary earnings. But if you didn’t opt to have taxes automatically deducted, you’ll owe income on the payments come April.

401(k) headaches will throw employees for a loop …

If you took advantage of the CARES Act to tap your 401(k) for emergency expenses, be aware that there are some quirks in the tax treatment of those funds. Ordinarily, people under the age of 59 ½ who withdraw funds from a qualified retirement account have to pay a 10% early withdrawal penalty, but the CARES Act waived that penalty for withdrawals through December 30, 2020. You will, however, have to pay tax on the amount you withdrew at your regular income tax rate.

You can either pay all of the tax you owe on next year’s tax day or spread the repayment out over three years if you don’t plan on replacing those funds back into a qualified retirement plan.

If you do plant to replace those funds (MONEY has a primer into why — and how — you should), Kelsey Clair, tax strategist for the Private Wealth Management Group at Baird recommends paying it all off by tax day 2021 if you can afford to.

The CARES Act gives you three years to put the money back, but the structure is kind of convoluted, and each year you wait means more tax paperwork, she says.

Unsure of how to navigate 401(k) withdrawals?
An online financial advisor can help you develop a sound and effective economic plan that works for you. Click below to learn more.
Get Started

… As will Trump’s payroll tax deferral

The “payroll tax holiday” being promoted by the White House could be another wrinkle in your 2020 taxes.

The president in August signed an executive order allowing employers to defer withholding the 6.2% portion of workers’ paychecks that funds Social Security for the rest of 2020. (MONEY has more detail here.)

A number of big companies like CVS Health, JPMorgan Chase & Co. and Home Depot have come out and said they don’t plan on doing that, but some workers have still seen bigger paychecks starting this month.

These employees aren’t getting a tax break, just a deferral, so that money is probably going to be due in 2021. Wild says the government hasn’t been clear on the exact details — the president has said he’ll waive the taxes completely if he’s reelected, but he needs Congress to make that happen; no sure thing in today’s political climate. The most likely scenario, Wild says, is that employees whose taxes are deferred this year will see double withholdings taken out of each paycheck for the first four months of 2021.

For people who are getting that payroll tax deferral now, the best advice is inconvenient but important: Put aside the extra money you’re getting in each paycheck now—say, in a savings account—to draw from next year if your take-home pay is smaller.

A tax extension won’t save you money

Although you can file an extension for your 2020 taxes if you need more time to work out the math next April, that doesn’t get you out of paying what you owe by tax day. The U.S. Treasury gave taxpayers an extra three months to pay 2019 taxes, making them due July 15, 2020, but that was a one-time event.

Typically, extensions work like this: You file an extension before tax day, which gives you an extra six months to prepare and file your return. But any money you owe is still due on April 15, meaning you’ll likely owe penalties and interest. This is the case if you’re a W-2 employee or work for yourself.

If you don’t have the money, the IRS suggests going ahead and filing an extension — the agency assesses separate late filing and late payment penalties. If you file for an extension, you’ll avoid having to pay the former.

Sign up for Turbotax now, to make sure that you can take advantage of a 2020 extension.
Simply click below and sign up with TurboTax today.
Get Started

Lessons From the Last Recession: How I Saved My Home from Foreclosure

Coronavirus and Your Taxes: Here’s What to Know About Deadlines, Refunds and Filing Online

Mortgage Rates Vary From State to State. Here’s How to Get the Best Deal if You’re Moving