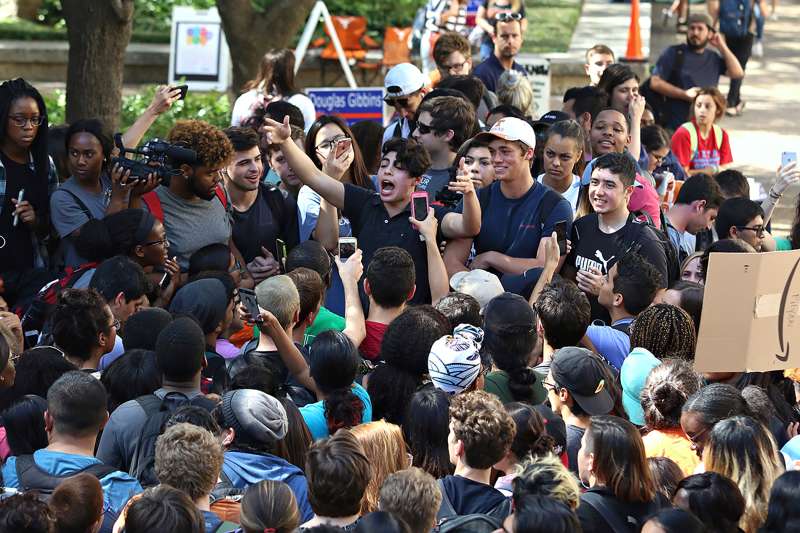 Students gather on the west mall to confront the Young Conservatives of Texas student organization over a controversial bake sale Wednesday, Oct. 26, 2016, on The University of Texas campus in Austin. The Young Conservatives of Texas chapter at the University of Texas-Austin sparked the protest with an affirmative action bake sale. The club encouraged students to “to buy a cookie from us and talk about the disastrous policy that is affirmative action.”
Joshua Guerra—The Daily Texan/AP

The 2016 election season has been wild—more Jerry Springer, less CSPAN. It’s hardly surprising, then, that student activists would launch their own outside-the-box political stunts.

At the University of Texas at Austin, a group called The Young Conservatives of Texas hosted a bake sale in which they priced goods based on affirmative action. That means they charged according to what they see as preferential treatment based on race at the college: Asians pay more (therefore receive less preferential treatment during the admissions process), while Native Americans pay nothing (meaning they get into college for free.)

The University of Texas consists of 45.1% white students, 19.5% Hispanic students, 17.2% Asian students, 3.9% black students and .2% Native American students. The college has repeatedly defended its affirmative action policies, even winning a Supreme Court case this summer, despite charges of reverse racism against Asian Americans and whites. Despite offending swaths of people who called the bake sale racist, the group’s leadership claimed the opposite.

“Our protest was designed to highlight the insanity of assigning our lives value based on our race and ethnicity, rather than our talents, work ethic, and intelligence,” the group’s chapter Chairman Vidal Castañeda said. “It is insane that institutional racism, such as affirmative action, continues to allow for universities to judge me by the color of my skin rather than my actions.”